First, let's just get this out of the way: We all know Walmart is garbage. This is not a hot take, but one based on myriad facts.

If we really wanted to delve into why Walmart is trash, we'd be here all day, but here's a few worthy reasons: small dairy farms across the U.S. are going under because of Walmart, its megastores hurt economic growth by undercutting locally owned businesses, and the Waltons, the extremely wealthy family behind the multinational retail corporation, have used legal loopholes to avoid paying estate tax.

Now let's focus on the most recent reason why Walmart is trash. Monday, on Martin Luther King Jr. Day, the official Facebook page for the Walmart store located at 1202 South Kirkwood Road posted the following advertisement for sunglasses: 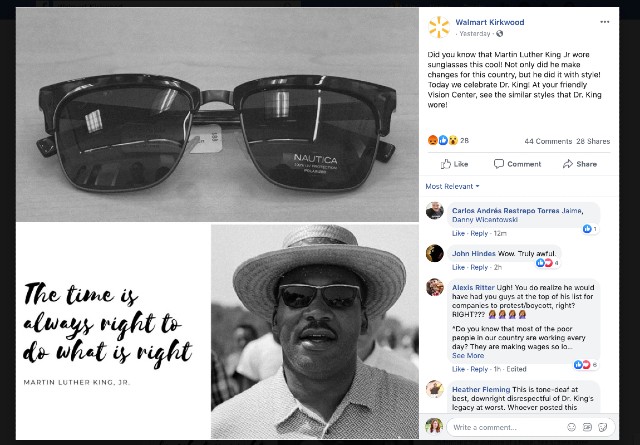 As you can see, St. Louis (or, ahem, Kirkwood), this post, like Walmart as a corporation, is tasteless garbage. (Walmart Kirkwood deleted the Facebook post late on Tuesday afternoon or we would have embedded it here, but because we assumed it would be taken down, we took a screenshot.)

We don't want to dwell on the negative, though, which would not be at all in the spirit of the Christian minister and Civil Rights Movement leader at the center of this trashy advertisement. Instead, we're taking extra time today to meditate on the legacy and wisdom of Dr. Martin Luther King Jr., who was, of course, assassinated in Memphis 52 years ago. Given the circumstances, we returned to King's reflections on economics.

In a letter written in 1952 to Coretta Scott before the couple were married, King shared the following thoughts on capitalism in America at the time:

"I imagine you already know that I am much more socialistic in my economic theory than capitalistic. And yet I am not so opposed to capitalism that I have failed to see its relative merits. It started out with a noble and high motive, viz, to block the trade monopolies of nobles, but like most human systems it fell victim to the very thing it was revolting against. So today capitalism has outlived its usefulness. It has brought about a system that takes necessities from the masses to give luxuries to the classes."

In America today, there's a short list of people who perfectly capture the idea that capitalism has "brought about a system that takes necessities from the masses to give luxuries to the classes," including, of course, the Waltons.

Editor's Note: This story was updated at 10 a.m. on Wednesday, January 22 to clarify that MLK Day is not in fact the date of Martin Luther King Jr.'s assassination, which sadly transpired on April 4, 1968. We apologize for the  error.

Walmart Kirkwood what the fuck
Prev
Next