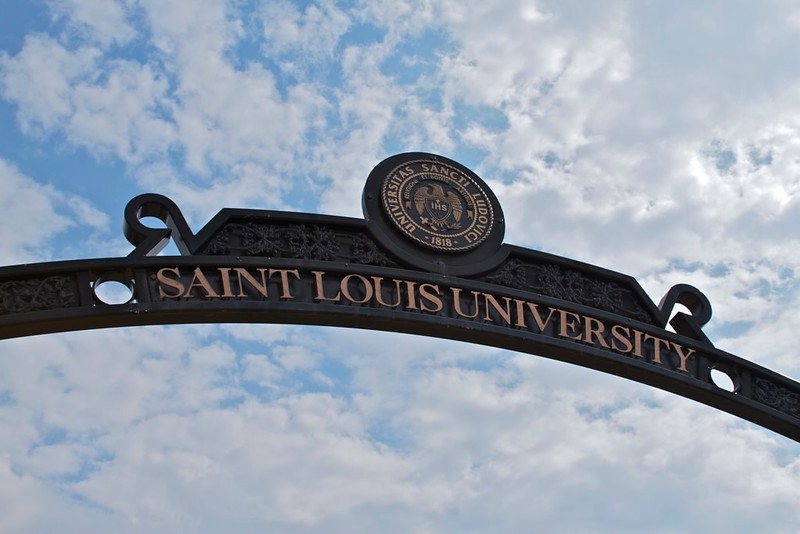 A white Saint Louis University campus safety officer acknowledged in a recent lawsuit that he held an unarmed black pedestrian at gunpoint in 2018 — but he also claims that, in fact, he was the victim of discrimination.

Filed in federal court Friday on behalf of SLU public safety officer Peter Garvin, the $300,000 discrimination suit describes an August 8, 2018 incident that began around 9 a.m. with reports of an an armed individual on the university's Midtown campus.

While the lawsuit tries to establish the facts of its discrimination claim, it also goes to considerable lengths in describing how Garvin and other DPS officers carried out their search for a suspect described only as a six-foot tall black male with "curly hair and wearing black pants."

According to the lawsuit, the ensuing police work resulted in Garvin and other SLU officers misidentifying a total of four unarmed subjects in three separate incidents, all seeming to involve random black pedestrians who "fit the description" and had the misfortune of being near the campus at the time.

Garvin, the lawsuit states, was riding a bike and "came into contact with two non-University individuals" near a campus building on Lindell Boulevard. One, who "matched the description on the dispatches" was wearing a sweatshirt tied around his waist. That was when Garvin spotted "some obvious girth around his entire waist," the lawsuit notes. "This was reportedly where the gun was reported to be on the suspect."

At this point, the lawsuit switches to the perspective of the two unlucky subjects, identified as Darren Combs and Chris Bridgett: "Mr. Combs alleged that [Garvin] pulled his pistol from his holster and pointed his weapon at him and Mr. Bridgett for no apparent reason."

Garvin wasn't alone on bike duty that day. The lawsuit describes how a second DPS bike officer had spotted the pair at the same time as Garvin. This second officer allegedly admitted that he had ordered the men "to get to their knees and put their hands behind their [heads] interlocking their fingers" and then handcuffed Bridgett "to control the situation."

However, the lawsuit continues, "The checks of Mr. Bridgett and Mr. Combs concluded with no found weapons."

That wasn't the end of the alleged blunders for SLU's campus police that day. According to the lawsuit, while Garvin and his partner were confronting two unarmed pedestrians, a separate contingent of SLU officers a few blocks away were chasing their own subject "matching the description."

Like with Garvin, it was a case of a misidentified subject. The lawsuit claims a different SLU cop, who is black, "pulled his weapon on the wrong suspect" — and that subject turned out to be, incredibly, "the actual initial victim that had reported being threatened with a gun." The lawsuit claims that this same SLU cop then approached "a second suspect and again drew his weapon," but, as with the others, "It was determined [the] suspect was not the person who was described in the dispatches."

That was the end of the SLU officers' pursuit for the armed subject. Three hours after the initial alert, the SLU DPS Twitter account tweeted that the morning's incident "was determined to be a disturbance outside the parish center and no weapon was located."

But it wasn't the end for Garvin. The lawsuit claims a SLU investigation concluded in January 2019 that while the cop had not violated the university's policies around racial profiling, he had shown "extremely poor judgment" and his performance was "considered unacceptable for his position."

As a result, Garvin was suspended without pay for two weeks and was "required to take mandatory additional training on racial profiling, implicit bias and bias policing," the lawsuit claims.

Here's where the discrimination claim comes in. Garvin's lawsuit alleges that while he faced an investigation and suspension, the other DPS officers, including the one the lawsuit claims had twice pulled a gun on unarmed subjects during the same incident, had faced no consequences.

The lawsuit goes on to allege that SLU discriminated against Garvin based on his race as a Caucasian, and that he suffered damages including "embarrassment, humiliation, damage to reputation, and emotional distress."

Messages left for a SLU spokeswoman Monday and Tuesday morning were not returned. We've also reached out to Garvin's attorney for any additional information about the original 2018 incident. This story will be updated if we hear back.