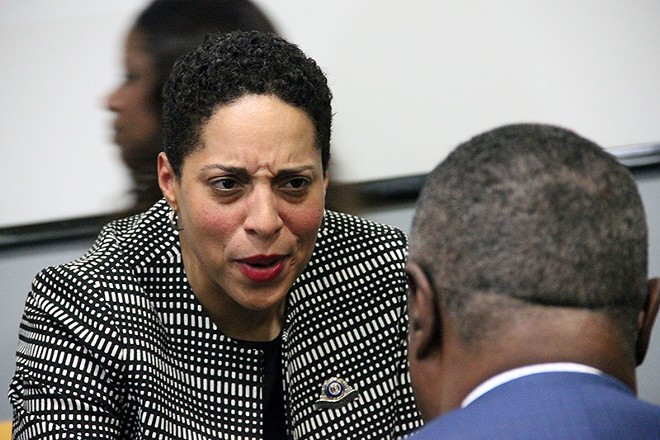 Battle lines are forming around Kim Gardner. This week, the St. Louis Circuit Attorney sparked national headlines with a civil rights lawsuit alleging she's the target of a racist conspiracy — an accusation she's airing as a criminal case against one of her own former investigators inches closer to her office door.

It's easy to get lost in the complexity, the overlapping characters and tangle of allegations that stretch back to the downfall of former Missouri Governor Eric Greitens. But for two St. Louis police unions — one that's mostly white and functions as a collective bargaining unit, the other mostly black and acting primarily as an advocacy association — this chaos is familiar.

Take Gardner's federal civil rights suit, filed Monday, which used an eye-catching legal basis for some of its claims: The Ku Klux Klan Act of 1871. The lawsuit notes the act was created "to curb conspiracies of white citizens who sought to interfere with state authorities’ efforts to expand racial justice and equality."

According to the lawsuit, that's "precisely the scenario" Gardner has encountered in St. Louis: A conspiracy to deny Gardner her rightful authority as a the elected prosecutor.

To support that argument, however, the lawsuit spends relatively little time with the 19th-century-era law passed to provide civil remedies for the racial abuse wielded by the KKK. Instead, Gardner's 32-page lawsuit draws much of its evidence from the same grievances that have long been raised by the Ethical Society of Police, or ESOP, which represents 240 police officers in St. Louis city.

In fact, the lawsuit cites a 112-page ESOP report published in 2016 that summarized its members' experiences of racism in promotions, discipline and discriminatory policing.

During a press conference Wednesday evening, ESOP President Heather Taylor, who works as a homicide detective with the St. Louis Metropolitan Police Department, delivered a carefully worded statement, affirming allegations of racism within the department, but stopping short of full support of Gardner. ESOP has made it clear its members have disagreed at times with the circuit attorney. However, Taylor says, Gardner's reports of racism with the police force are true.

"We won’t dismiss the meaning and the overall content of that lawsuit when it comes to racial discrimination in our police department," Taylor said, adding, "the lawsuit is legitimate because there is a culture that breeds and that is accepting of racism, discrimination, corruption."

Taylor's statement had begun with an acknowledgement.

"We haven’t always agreed with the decisions of the Circuit Attorney," Taylor said, and as example she noted the high turnover rate of prosecutors and cases where ESOP officers believe prosecutors are turning down otherwise good evidence for criminal charges.

Still, Taylor referenced several of the same examples cited in the lawsuit. She made the case that public officials' long-term failure to implement diversity and stamp out racism is responsible for the embarrassing symptoms we see today. She noted the trove of bigoted Facebook posts from white cops exposed earlier this year, as well as the police beating of undercover black cop Luther Hall during the 2017 protests and the bizarre friendly-fire police shooting of off-duty black officer Milton Green.
These incidents, Taylor said, are not "meritless." That was the word used by a St. Louis City spokesman to respond to Gardner's lawsuit, which names the city as a defendant. As a police officer, Taylor argued, "Whether you like the circuit attorney or dislike her, that shouldn’t be relevant in this job because it's not about us. It's about the people who were out there in the community that are victims of violent crime."
There was no mention of William Tisaby, however.

Currently, Tisaby, a former FBI agent Gardner hired to be an outside investigator, is facing multiple perjury charges for allegedly lying to Eric Greitens' defense attorneys during a deposition, and the resulting probe has continued to cloud her time in office.

Gardner's lawsuit frames the Tisaby prosecution as part of the conspiracy to take her down. She isn't suing on behalf of aggrieved black police officers, but arguing, among other things, that only such a conspiracy could explain how special prosecutor Gerald Carmody obtained a warrant to raid her offices for evidence in the criminal case she'd brought against Greitens.

This is also where St. Louis police's largest police union comes into play, the St. Louis Police Officers Association, or SLPOA. Although black officers may see ESOP as their public representative, the SLPOA is the collective bargaining unit for the city's nearly 1,300 sworn officers. It's also named as a defendant in Gardner's lawsuit — along with its spokesman Jeff Roorda

For years, Roorda has waged open warfare on Gardner, never missing an opportunity to highlight the instability inside the Circuit Attorney's Office or a chance to fiercely oppose the prosecution of officers involved in alleged abuse. On Tuesday, Roorda staged his own press conference to respond to Gardner's lawsuit.

In his remarks, Roorda called Gardner's lawsuit "the last act of a desperate woman" and denied the accusation that he and the SLPOA opposed the prosecutor just because she is the city's first black circuit attorney.

Roorda's name appears more than a dozen times in Gardner's lawsuit, including a mention of a September radio interview in which the spokesman had said Gardner must be removed "by force or by choice."

Roorda, though, has been criticized himself — most loudly from ESOP and Taylor — as being perhaps the worst police spokesman in the United States. He photoshopped Gardner as the Grinch for the association's Christmastime newsletter and unleashed fury at her "exclusion list" of officers barred from giving testimony. This past summer, Roorda encouraged officers to adopt the logo from The Punisher comic books, despite its violent baggage as a symbol of vigilante violence. As the region memorialized Michael Brown, Roorda celebrated the "Happy Alive Day" of Darren Wilson, the officer who had fatally shot him.

Gardner's federal lawsuit arrives at a time when the investigation of her office is heating up. Gardner was scheduled to be deposed Wednesday in the case of Tisaby, but court records show it's been rescheduled to January 24. As we've previously reported, Tisaby's indictment contained multiple allegations that appeared to implicate Gardner in the same statements that got the investigator charged with crimes. Gardner's critics, like Roorda, argue that the prosecutor is deflecting from her own impending legal crisis.

But while the local police unions take their own positions on the explosive lawsuit, Gardner herself gained backup this week: On Tuesday, six black female prosecutors from six different states, including Marilyn Mosby of Baltimore, converged on the steps of the Carnahan Courthouse downtown to lead a rally for Gardner.

"You are not alone," Mosby said of Gardner. "We will not stand idly by any longer while the keepers of the status quo try to tear you down."

Later that day, Gardner joined the self-described "sisterhood" of prosecutors at a forum held at Harris-Stowe University. Gardner's flight had apparently been delayed, and when she finally arrived the filled-to-capacity room erupted in chants of "Hands off our prosecutor!" and "We love Kim!"

How much further will the Greitens saga follow Gardner? Her lawsuit may be an attempt to rise above the chaos of its aftermath, but her opponents argue she's just burying herself in it even further. She faces her first reelection bid this summer, and there's no telling how nasty things may get on the way to the ballot.

When Gardner addressed the packed forum, she argued that the lawsuit wasn't just about her, but about the people's decision to elect her to make the hard reforms that had long been resisted.

"No longer are we going to sit here and have the powerful few choose to take out the people's voice," she said, as the crowd began to roar her name again. "This suit is by the people and for the people, and we are not going to back down."