How St. Louis Could Close the Workhouse and Save Money 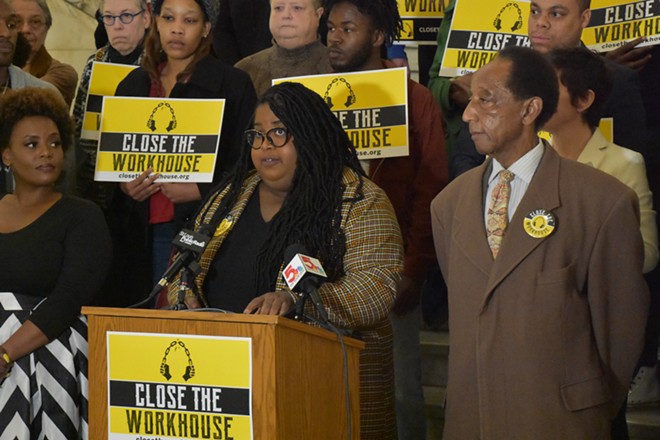 A new roadmap to closing the Workhouse aims for the aging jail's lifeblood — its $16 million annual budget.

At a news conference today, advocates for criminal justice reform and allies in the city government described a plan that involves defunding the controversial jail, moving state and city inmates to St. Louis' modern jail downtown and ending contracts to house federal inmates.

"The Workhouse is a stain on the city of St. Louis," said Kayla Reed, founder of Action St. Louis, one of the lead organizations behind the Close the Workhouse campaign along with the Bail Project and ArchCity Defenders.

Officially named the Medium Security Institution, the 53-year-old Workhouse has a capacity of 1,138 inmates, yet its daily population no longer comes close to that. As of today, there are 239 inmates there and another 660 at the City Justice Center (CJC), which opened in 2002 next to the downtown courthouses and has a capacity of 860.

Supporters for closing the Workhouse suggest moving all the people awaiting trial on municipal and state charges to CJC. There would be plenty of room, they point out, if the city stopped accepting federal inmates.

Housing federal inmates is part of the cashflow for county and city jails across the country, but a new report from the Close the Workhouse campaign that was released today argues that St. Louis actually loses money on the deal. There are currently 233 federal inmates in city jails. At $90 per day for each federal inmate, according to the report, the city is anticipating earning about $5.1 million in 2020 through its contract.

If the city stopped holding the federal inmates, it would have room to spare in the CJC, even taking into account inefficiencies that come with the need to keep some inmates separate from others. It could then sell the Workhouse, save the $16 million and come out $11 million ahead after subtracting the federal money.

Spencer is among a group of aldermen supporting a soon-to-be-introduced board bill that seeks to eliminate funding for the Workhouse and redirect its budget toward services designed to address issues such as poverty that often suck people into jails and courts.

The Workhouse has long been a target of critics, who over the years have described black mold, rats, dangerously extreme temperatures and violence.

"The conditions are just horrendous," said Callion Barnes, a member of the Close the Workhouse campaign, who added that he has been in and out of the jail during the past two decades. "It's inhumane."

The city has tried to revamp the jail's notorious reputation, claiming improvements to the facility, but defense attorneys and advocates say they're not seeing much if any improvement.

Of the inmates in city jails, nearly all of them are awaiting trial. Activists say that runs counter to the legal principle that defendants are innocent until proven guilty, and they argue it is morally indefensible, noting that the cash bail system hits poor, often black people from vulnerable neighborhoods the hardest.

The Bail Project, which is a core organization behind the campaign with Action St. Louis and ArchCity Defenders, has posted bail for more than 2,300 people and reports that those defendants have made more than 90 percent of their court dates.

If the city put a portion of the Workhouse's budget toward making it easier for people to come to court — ideas include sending reminders, providing transportation to the courthouse and childcare — it could allow them to deal with their legal obligations without the destruction to families, careers and communities that even a short stint in jail can cause.

Reed of Action St. Louis says the Workhouse has played a major role in a broken system.

"For decades it has devastated families, causing economic burdens on people already struggling to make ends meet," she said at today's news conference. "Cash bail is a failed system, and the Workhouse is a failed institution."

Correction: An earlier version of this story incorrectly reported the number of inmates at the Workhouse. We regret the error.