Of Course the Delmar Trolley Broke Down on Its Final Ride 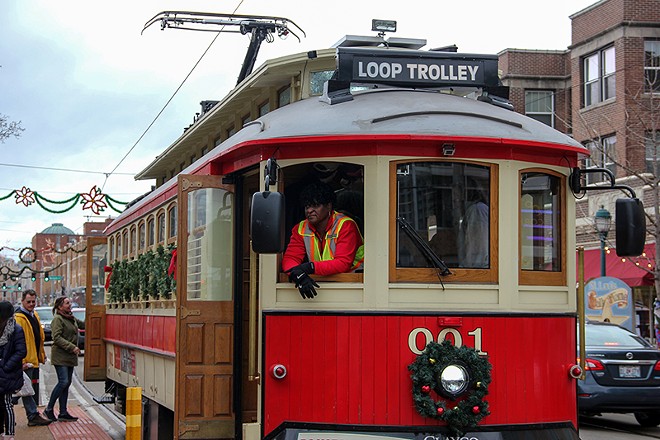 This weekend, at long last, the Delmar Trolley was a major tourist attraction.

The passengers, many of whom were seemingly first-time riders, were packed together like New York commuters, holding on to the ceiling straps as the trolley rocked and clanged through a 2.2-mile route that, after its first year of operation, had generated ticket sales of about $32,000.

That figure missed the trolley's projections by some $370,000, but the impact of its failure is too vast to calculate in just dollars. After years of construction and mechanical delays, only the rails of this Ozymandian effort remain for travelers to marvel at. The fate of the infrastructure, and that of the trolley's future, is now in the hands of the region's public transportation authority.

Still, this weekend, the Delmar Trolley got to live its best possible life, though probably not in the way that its backers hoped. The trolley that had taken nearly a decade to build and which was unmade, by spectacular margins, in a brisk thirteen months, was finally bustling. On Sunday, this reporter witnessed riders along the route being turned away for lack of space.

Alas, like the Cinderella story, the magic of the trolley's passenger-packed weekend came to an abrupt end on its final ride, and it again became the busted pumpkin we've all come to know and mock, the one that's seemed endlessly doomed to stall, break and clang into things.

That is to say: Yes, on its final ride, the Delmar Trolley broke down.

Around 5:50 p.m., ten minutes before the trolley's stated closing time, riders took to Twitter and Facebook to describe the incredibly fitting fate that had befallen them: The trolley was stuck.

I am in fact on the very last ride of the loop trolley. And it just broke down.


Tweeted Gloria Lloyd, news editor for Call Newspapers: "I'm on the last ride of the Loop Trolley, and we're currently stuck in front of the Peacock Diner on The Loop. 'Ladies and gentlemen, we are suffering technical difficulties,' the driver just said."

Apparently, the problem lay with the trolley's doors, which, for some inexplicable reason, are integral to trolley's ability to move.

The problem is not mechanical, but the trolley doors are out of sync and don't open at the same time so the trolley can't start. A maintenance worker is on his way. "We won't be here all night," a worker says. #LoopTrolley #LastRide #ClangClang


Lloyd continued to Tweet from the beleaguered ride, which the trolley workers were attempting to fix with the tried and true method of "turning it off and on again."

They warned us they're turning the trolley and lights off and back on again. Now we're in darkness. The reboot always works, is the thinking. #LoopTrolley #SpookyLoopTrolley #LastRide

"The perfect ending to this saga," wrote Burleigh in a Facebook post, to which he added updates as his ride stretched for more than an hour.

"Apparently the doors are malfunctioning, and the trolley can't run with them not working correctly. They believe the doors are now fixed," he wrote in one update, though that was followed immediately by another that read, "Still stuck."

"We got to the end," Burleigh wrote on the sixth update to the saga. "One and a half hours to go from Blueberry Hill to the History Museum."

In a subsequent message to RFT, Burleigh clarified that the trolley had not, as in breakdowns past, required a pickup truck to tow it back home. But it had blocked a lane of Delmar Boulevard for more than hour.

Such was the end of the colossal wreck that is the Delmar Loop Trolley. But it's not completely dead — you didn't think it would be that easy, did you? St. Louis Public Radio reported this weekend that the Bi-State Development Agency, which runs the region's metro and bus systems, is "considering converting the trolley into part of the region’s public transit system."

To do that, though, the trolley will have to do something it failed to do Sunday and also many other days. In remarks to the radio station, Bi-State CEO Taulby Roach noted the obvious: That passengers are relying on public transport to get them to work or their destinations.

"They need to know," Roach said, "that the trolley is going to be there on time and on a regular basis."