It was the day before the day before Christmas, and all through a warehouse lay property stolen from job sites in St. Louis and thereabouts. "Numerous burglaries," police said, turned up some 800 items. Their real owners are out there. The challenge is to find them.

Police recovered power tools, a toilet and lawnmowers a'plenty. A refrigerator, a baby picture, and purses — alas, each empty. Divided by police tape, the rows arranged with care. Police are asking the public if they recognize what's there.

Two suspects are in custody, police said, part of a "sophisticated ring" that targeted rehabbed homes for the high price resold equipment can bring.

Generally, explained Sgt. Tom Kitchell, of the police burglary division, burglars don't stockpile enough tools to build two dozen kitchens. The usual suspects are junkies, who sell quick for low pay. But this crew was patient, "They would actually try not to get rid of it right away."

The scheme, Kitchell said, was a large-scale crime, and the burglars sought out legitimate construction companies hoping "to sell them a whole lot of stuff at one time."

The burglars sought sales, at least in the main, but Kitchell alleged one suspect used items for "his own personal gain." In fact, suggested St. Louis police Captain Ryan Cousins, the suspects had expertise in the field of construction.

"They would know what to steal and what would be of value to sell," indicating the burglars preyed on an industry they themselves knew well. They hit targets at night, knowing it was safer, and then hiding hundreds of "products" to use or sell later.

Cousins said the recovered items were stolen over the past year, but only in the last couple weeks did the big picture become clear. Multiple incidents, separate thefts, turned out to be connected, a criminal web that left livelihoods sharply affected.

Already, police have returned some 200 stolen items, but that's generally been to the owners who made police reports, which made it easy to find them. What remains are hundreds more things. There's a bicycle, vinyl records, various saws — even a high-def flatscreen.

So take heed, St. Louis, police need help in this hurdle, to find rehabbers whose worksites were recently burgled. Maybe you thought your lawnmower would never be found? It might just be waiting for you in a police-held impound. Owners are asked to contact the police — though of course not the morgue. Just email the Third District Detective Bureau, at recoveredproperty@slmpd.org. 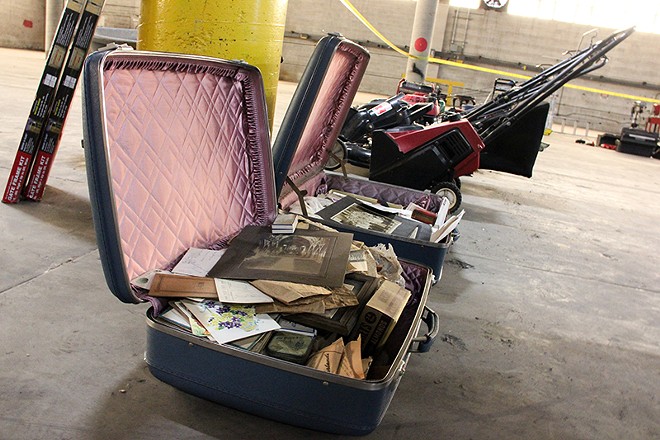