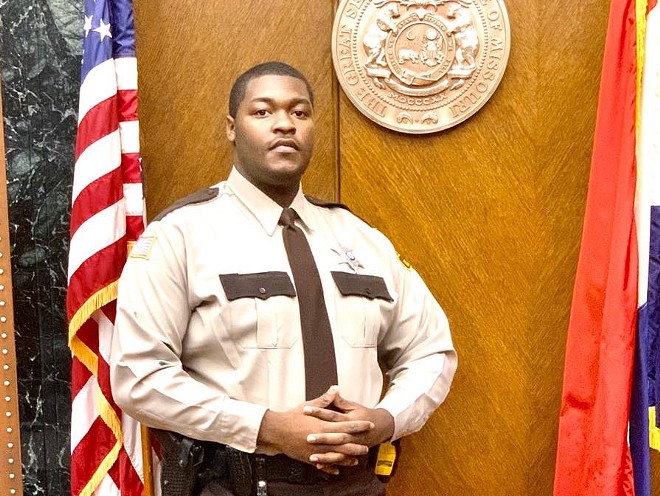 Hired in July, deputy Alfred Montgomery had only worked the job a few months before he knew he wanted to run for elected office — specifically, the one occupied by his boss, St. Louis City Sheriff Vernon Betts.

But Montgomery's announcement of his campaign, made through a Facebook post on December 15, turned out to be one of his last actions as an employed deputy. One day later, on Monday, Montgomery again took to his campaign's Facebook page — which uses a photo of Montgomery in uniform as its profile image — to claim that he had been fired for "exercising my constitutional 1st amendment right to run for Sheriff for the City of St. Louis."

In an interview with RFT, Montgomery claims Betts approached him several times after hearing about his plans for candidacy. Montgomery says he initially planned to run in the 2024 election cycle. Those plans changed, though, after Betts "kept trying to intimidate me."

In one such interaction, Montgomery alleges Betts told him that, "If I keep playing with fire, I was going to get burned."

In response to requests for comment, on Wednesday the sheriff's office released a detailed statement on Montgomery, countering the now-fired deputy's allegations. According to the statement, the firing was not related to the deputy's electoral ambitions, but to his "substandard work, absenteeism [and] repeated violation of department policy."

This isn't the first time a city sheriff has fired a deputy for running for sheriff. In fact, in 2011, longtime sheriff James Murphy, who had held the position since 1989, fired one of his deputies for "actively campaigning for the office of Sheriff."

At the time, Murphy had instituted a curiously specific procedural order that banned deputies from running for any elected office while still employed by the sheriff. After Betts was fired — he'd worked as a deputy for about three years — he went on to narrowly lose to Murphy in the 2012 primary. Murphy decided not to run again, and Betts handily won the 2016 election for sheriff against a field that included Ward 23 Alderman Joe Vaccaro.

Now, eight years after Betts was shown the door for his political aspirations, the roles are reversed. In Montgomery's Facebook post on his firing, he wrote, "Current Sheriff Vernon Betts has went down the same path as the previous Sheriff, Jim Murphy." The post concluded, "Despite the current status of my employment I will continue to run my race with integrity, respect and fairness. I will continue to push through all obstacles no matter what."

The sheriff's office disputes Montgomery's version of events. The statement released to RFT charges that the deputy racked up multiple reprimands in his four and half months on the job, including findings of "[interfering] with St. Louis Police Department Officers conducting an investigation" and violating the office's social media policy.

And although Gregg Christian, a sheriff's office spokesman, tells RFT that there is currently "no restriction for running for Sheriff, or any other office by any Deputy," the statement released by the sheriff's office asserts that the "ultimate decision" to fire Montgomery occurred only after the deputy continued to violate state and federal election laws by "attending political events or campaigning while in uniform or on duty."

"It is important to note that the Sheriff Betts did not fire Mr. Montgomery for his decision to run for office," the statement continued. "In fact, the Sheriff continued to employ three of his political opponents from the last election; two of whom are currently still working with the office."

In response to the sheriff's statement released on Wednesday, Montgomery countered with his own allegation of improper electioneering: He provided RFT with a recording of a conversation he had with Betts during work hours earlier this month, in which Betts asked Montgomery to be his "eyes and ears" at Democratic committee meetings and to assist Betts' efforts to win election as the 5th ward's committeeman.

In an interview this morning, Montgomery also contested the sheriff office's description of his alleged absenteeism on the job — he claims Betts had given him permission to leave work in order to tend to his family after his wife was hospitalized — and alleges that Betts is trying to "slander my name."