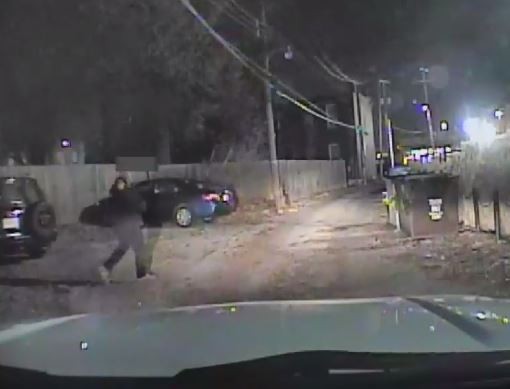 Today, St. Louis police released footage from one of two officer-involved shootings that occurred last week. The footage, taken from a patrol car's dash camera from about 2:20 a.m. on December 12, appears to show a subject raise a handgun at police while walking quickly down an alley near the 4300 block of Arco Avenue in the Grove district.

The footage, which lacks audio, captured part of the shooting, though the angle of the in-car camera leaves much of the action out of frame.


In a press conference after the shooting, St. Louis Metropolitan Police Chief John Hayden identified the subject only as a 27-year-old man. In an email to RFT, SLMPD spokeswoman Michelle Woodling said the department does not identify subjects unless they are deceased or the subject of a warrant.

However, during the press conference, Hayden told reporters that police confronted the man because he matched the description of a suspect in an attempted robbery at a nearby White Castle. According to a report later day from the St. Louis Post-Dispatch, Hayden said an officer had spotted the man running behind the alley, and, as the patrol car approached, "the man turned and pointed a weapon" but did not fire at officers.

The officer exited his car and fired several shots, the chief said, striking the subject in the right knee. The man was later transported to the hospital in "critical but stable condition." (In an email today, SLMPD spokeswoman Woodling said the man has since been treated and released from the hospital. She later clarified that "warrants have not been issued for this incident at this time.")

In the video, the man appears to raise his right hand to point what police say was a .22-caliber pistol at the officer inside the patrol car. Most of what happens next occurs out of the camera's frame, and what is visible is largely obstructed by a bush. At the 33-second mark, the man appears to jump a fence and fall on the other side. Two officers then enter the frame and approach the man with weapons drawn. It's not clear if the man was still pointing the handgun at officers when he was shot.

Police later released a photo of a .22 caliber pistol recovered at the scene. No officers were hurt.

Less than 24 hours after the shooting — which marked the thirteenth police shooting by an SLMPD officer in 2019 — St. Louis police shot and killed Cortez Bufford during a "pedestrian check," bringing the number of fatal police shooting this year to eight. Bufford, 24, had previously sued multiple St. Louis officers in 2015 after dash cam footage captured officers beating him following a traffic stop, leading to a $20,000 settlement.