December 09, 2019 at 12:38 PM
comment
A Missouri elementary school is investigating an in-class assignment given to fifth grade students that asked them to consider the trade value of slaves on their hypothetical plantation — and what price to assign those slaves.

"You own a plantation or farm and therefore need more workers," the assignment stated. "You begin to get more involved in the slave trade industry and have slaves work on your farm. Your product to trade is slaves."

The assignment, given during a social studies class at Blades Elementary School, included a blank line for students to set a price per slave, as well as the instruction, "These could be worth a lot."

But educationally, the assignment's worth came under scrutiny. On Monday afternoon, a Mehlville School District spokeswoman told Riverfront Times in an email, "The teacher who created the assignment has been placed on administrative leave."

In an earlier email to parents sent this morning, Blades Elementary School principal Jeremy Booker acknowledged that he'd been alerted to the existence of an assignment over the weekend. He described it as an activity that had "attempted to address market practices."

"As part of both the Missouri Learning Standards for fifth-grade Social Studies and the fifth-grade Mehlville School District curriculum, students were learning about having goods, needing goods and obtaining goods and how that influenced early settlement in America," Booker's email continued. "Some students who participated in this assignment were prompted to consider how plantation owners traded for goods and slaves."

Earlier today, Riverfront Times first reported on the assignment after a photo of the worksheet was shared on Facebook. According to the Facebook post — which was uploaded Sunday by someone claiming to be a friend of a parent whose child is enrolled at Blades Elementary School — the assignment was part of a "westward expansion lesson" in which students were assigned different items for trade, including human beings.

In response to requests for comment from RFT, Jessica Pupillo, Director of Communications for the Mehlville School District, provided the entire four-page classroom activity about the free market of the colonial era. According to the worksheets, students were assigned particular roles and commodities. For instance, some were Connecticut farmers growing grain, while others were fishermen in Massachusetts selling herring and hunting whales

And some students were plantation-owning slave traders. The activity sheet made no attempt to distinguish the institution of slavery from the trading of agricultural products — except in one place. Only in the category of slave trade were students reminded, of their commodities, "these could be worth a lot." At the very least, it is a strange way acknowledge the vast wealth and economic power that whites stockpiled throughout a government-sanctioned, centuries-long enslavement of millions of people. 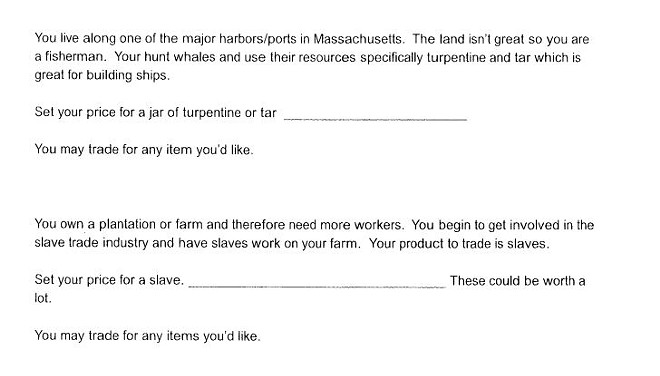 On the worksheet's final page, titled "Reflection," students were given room to answer questions about the ways they had priced their goods, and whether they thought they had become "wealthy."

"Think about the types of items you have and how much money you have leftover," the activity sheet instructed. "Do you think the free market economy is good to be a part of? Do you think allowing people to set their own prices and buy and sell freely is a good economy? Why or why not?"

And that's it. The activity sheet concludes without any further remark on slave owning, its role in colonial society or the consequences to American history.

"For me, for my biracial son to come home, and to see '$5 for two slaves,' I was shocked," says Angie Walker, an elementary school teacher for St. Louis Public Schools and a mom whose son is enrolled as a fifth grader at Blades. It was her son's worksheet that was posted to Facebook on Sunday.

According to Walker, her son said the teacher had presented the assignment as part of "a game" to see who could amass the most wealth through free trade. He'd been assigned the role of slave owner.

"First of all, the slave trade industry is never a game," Walker says. "The teacher could have gotten the lesson across perfectly fine without using slavery. It could have been a teachable moment, and things like this in 2019 should not be occurring. We can all learn from this and do better."

In the school email to parents this morning, Booker, the school principal, described the assignment as "culturally insensitive." He did not name the teacher but said he had met with the educator earlier this morning to discuss "the impact the activity could have on students."

"The teacher has expressed significant remorse," Booker wrote. "The district is continuing to investigate this event."


Editor's note: The story was updated after publication to include excerpts from the principal's email and additional details about the classroom activity.