A St. Louis Artist's 'Smash the Patriarchy' Image Went Viral. Then a Man Copied It 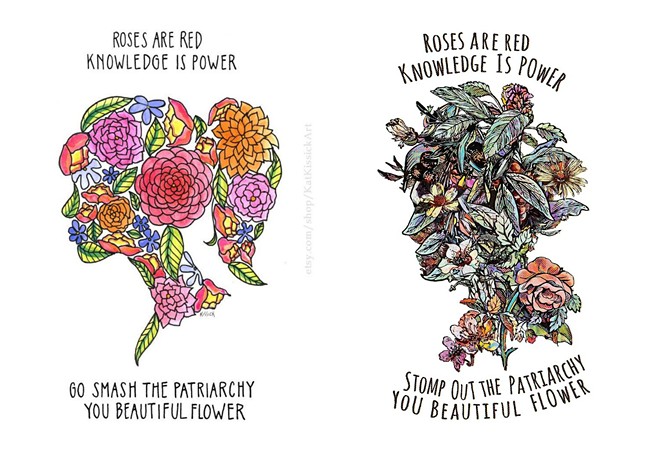 To Kat Kissick, the image in her Google search was unmistakable: A digital illustration of a feminine head formed by flowers and framed by a caption on top that began, "Roses are red, knowledge is power," and continued below, "Stomp out the patriarchy you beautiful flower."

She immediately recognized it as a ripoff of her own work, an illustration she'd drawn in late 2018 that had gone viral on Facebook, where it had been shared 17,000 times and from which Kissick had sold T-shirts, prints and postcards.

The irony of discovering a copycat image drawn by a male artist, named Karl Frey, was also impossible to miss, and to Kissick, kind of hilarious. After all, "the patriarchy" is a term often used to describe the unearned benefits society ascribes to men due to generations of gender inequality — and here seemed a perfect example of that sort of patriarchal entitlement in action.
"He took the concept of my design, he re-did it in his own style, changed 'smash' to 'stomp' and called it a day," Kissick says. "Like, thanks for making my point, guy."

Frey's image, which until Wednesday was offered for sale on the online retail platforms Society6 and Redbubble, differed slightly from Kissick's in style, but not substance. The fem flower head was redrawn, but in the same pose and perspective. The caption's setup was identical, but instead of "Go smash," the new image proclaimed, "Stomp out the patriarchy you beautiful flower."

Kissick says this wasn't the first time someone had repackaged her work. She provided screenshots of products that copied her "Roses are red, knowledge is power" setup, while others took the flower design and added it to new captions. Another ripped-off design was sold as a T-shirt in a feminist-focused Facebook group with nearly 100,000 followers.

"There's this whole starving artist cliché," Kissick says, "and it's true. It's pretty cutthroat. Everyone is trying to make a dime, but I don't want to give my dimes away just because they steal my stuff."

And Frey isn't some starving artist. He's an associate professor of art and art history at Northeast Lakeview College in San Antonio, Texas, a position he's held for nearly a decade. His work has been exhibited in galleries, and his own website includes the statement, "All images are under the impression that they are copyrighted."

On Wednesday, Kissick posted Frey's illustration to her Facebook page, along with screenshots of an email she sent him under the subject line, "Hello, Art Thief!" In her email, she demanded that Frey take down the products — and later that day, the items did indeed disappear from Frey's page's on Society6 and Redbubble.

Frey declined to comment on the record when RFT reached him by phone on Thursday. However, he did email Kissick, who later published his response to her Facebook page. In the email, Frey claimed that he wasn't a "commercial artist" and that he had only produced the image as a personal favor to his wife's boss, who had found the image online and wanted it on a T-shirt as a gift to her young daughter.

"I asked if there wasn’t a T-shirt of it already available and my wife’s boss said that there wasn’t," Frey wrote, though he also acknowledged that he hadn't asked where the design had come from. He added that he had "enjoyed the challenge" of redrawing the image, and noted that he had tried to change "at least twenty percent" of Kissick's illustration in order to create "an original work and not a simple derivative of your design."

Frey went on to claim that he made no sales with his version of the image. In the email, he wrote that he had only uploaded the image to the retail platforms so that his wife's boss could select a particular T-shirt fabric blend, but he had neglected to remove the images after the favor was complete.

Frey concluded his email with an apology, writing, "I can't apologize enough for my lack of diligence in sourcing the reference and for leaving it publicly visible," and added, "I hope that knowing that no commercial harm or intent was present helps in some measure to ease your pain."

The offending products may be gone, but Kissick tells RFT that she was "incensed" by his attempt at apology, noting that he only got to the actual apology part after writing a lengthy explanation about his wife's boss' daughter — and more than that, it showed a professional artist and academic admitting he'd tried to alter her image just enough to be "original."

"It was was so typical, a typical male response," she says. "He was like 'Yeah, I did it, but it was for a good reason.'"