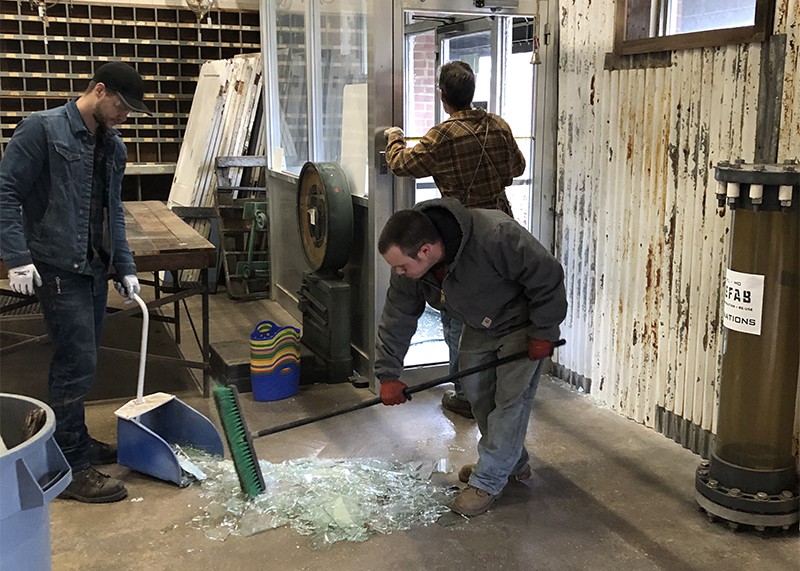 Since its start in 2012, the salvage nonprofit Refab has deconstructed dozens of buildings in St. Louis, reclaiming valuable materials and vintage objects that would otherwise go to a landfill and selling the repurposed goods at its Benton Park West store — but during the same time period, executive director Eric Schwarz says his store and worksite have been burglarized seven times.

The most recent break-in happened early Monday morning. The timing was particularly galling, coming little more than a day after Small Business Saturday, an occasion for communities to support local businesses amid the corporate craze of the holiday retail season.

"At this point, we're feeling pretty fed up with the burglaries," Schwarz tells RFT, noting that while the burglars took a little less than $1,000 from the cash register, they caused thousands of dollars in damage to two glass doors at the entrance to the shop at 3130 Gravois Avenue.

"It was weird," he adds. "They left a $1,500 MacBook and some other electronics here at the front desk. They were just interested in cash."

It's a much smaller loss than previous break-ins. This past June, Schwarz says burglars hit a worksite in the Vandeventer neighborhood, where his crew is working on a city contract to deconstruct a 135-year-old brick warehouse. At the time, Schwarz says he'd decided to use an old FedEx truck to store his workers' tools and the specialty gear required to take apart a house.

"We thought the truck was secure, and it turned out not to be," he says. The burglars made off with pneumatic denailing guns, ladders, compressors and scrap metal. They even took the hard hats.

Schwarz says he's never been able to recover the items taken in previous burglaries, including a 2014 theft of more than $10,000 worth of tools from a supposedly secure mobile office converted from an old shipping container. It's not just the store and its worksites being targeted: Last year someone stole an entire tiny house that had been hitched to a trailer and parked outside Refab's warehouse and store. The tiny home was recovered two days later.

Schwarz doesn't blame police for the repeated break-ins — he points out, "They have their hands full" — but suggests that the lack of living wage jobs is partly responsible for the persistence of burglaries. Schwarz says he now employs about sixteen people, including veterans, the formerly homeless and those recently released from prison.

"We think that if people were paid a living wage and the job situation was better, we probably wouldn't have so much burglary," he says.

Still, crime statistics show that Benton Park West has been hit especially hard by burglaries this year. According to crime data compiled by the St. Louis Post-Dispatch, there were 30 reported burglaries from May to October, up from sixteen reported during the same six-month span in 2018.

Schwarz, though, is adamant that the break-ins won't change Refab's overall mission to "promote the collective and creative re-use of our built environment." In fact, the nonprofit is aiming to expand its deconstruction efforts to a 30-home pilot program next year.

What remains to be seen, however, is whether Refab can make through a year without a burglary.