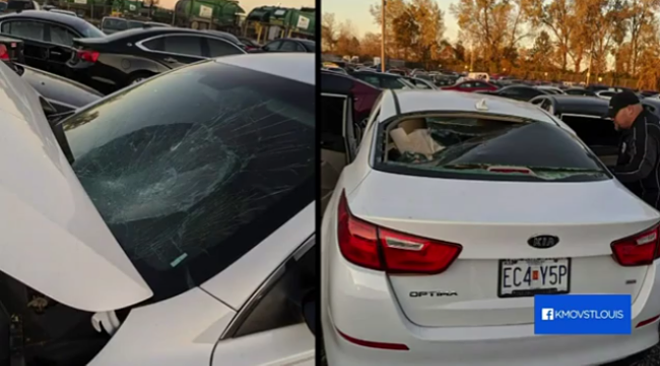 A breathtakingly stupid thief has been identified by Arnold police this week after they left a Samsung tablet apparently filled with videos of stolen vehicles in the glove box of a car they'd stolen.

KMOV reports that Karen Long, a resident of Pleasant Valley Terrace in Arnold, awoke a couple months ago to find that her 2015 Kia Optima had been stolen from her driveway.

“Oh my God, seriously, this can't be happening," she tells KMOV she thought at the time. "I just couldn’t imagine someone stealing our car.”

When the car was recently recovered by police in north St. Louis, Long found that multiple windows had been smashed, with trash strewn about and stains throughout the interior. But it's the Samsung tablet left in the glove box that she found most interesting.

It would seem that the absolutely brain-dead moron who'd stolen the vehicle had accidentally left the expensive piece of technology behind. Dumber still, the tablet was apparently filled with evidence of additional crimes.

Long took the tablet inside, charged it, and then clicked the Facebook icon in an effort to learn more about the person who'd stolen her car. There she found several photos of young men and women posing with guns, money and drugs.

"There were pictures of them holding stacks of $100 bills,” Long tells KMOV.

But wait, it gets even dumber! After perusing Facebook for a while, Long went to check out some videos on the tablet. She says she was unable to access those videos, but she noted that the thumbnail images for them showed the interior of her car, as well as several other vehicles she suspects were also stolen.

Lt. Clinton Wooldrige of the Arnold Police Department tells KMOV that detectives were able to get into the locked videos on the tablet, and they've since identified a suspect in the case. They have not yet released a name.

Meanwhile, the department is using the info found on the device to see if they can identify suspects in other crimes committed in Jefferson County. Videotaping this crime spree, it turns out, was not the best idea this thief ever had.

We reached out to the Arnold Police Department; they say that this case is still open and they cannot release any further information at this time.