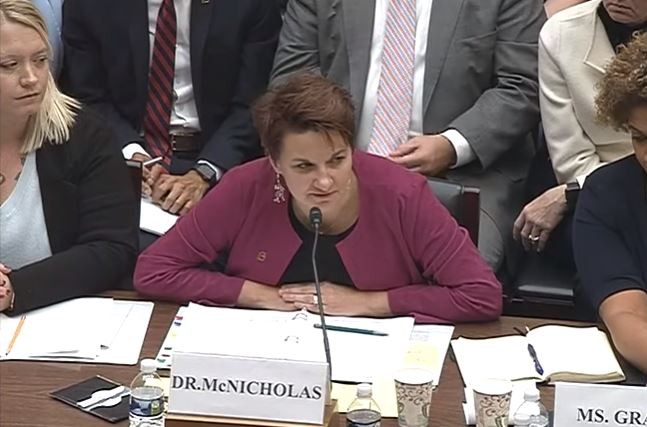 In Washington D.C. last week, the reality gulf between Republicans and Democrats collided in a bruising and public display — and no, not around Donald Trump's impeachment. This was about abortion in Missouri.

You may have missed it. With all eyes trained on the impeachment hearings, the November 14 meeting of the House Oversight and Government Reform Committee garnered little national attention. The stakes, though, are undeniably high, as Missouri faces the imminent elimination of its only operating abortion provider, the Planned Parenthood-run health clinic in the Central West End.

The fate of the clinic's abortion license awaits a ruling from a state administrative judge. If that ruling sides with the state's health officials, who denied the clinic's license, it wouldn't just mean the end of abortion in Missouri, but the end of more than four decades of the continuous, nationwide abortion access that stemmed from the Roe v. Wade decision in 1973.

And so, for more than three hours on Thursday afternoon, the House committee members questioned a panel of abortion rights advocates that included Dr. Colleen McNicholas, chief medical officer at the Planned Parenthood of the St. Louis Region and Southwest Missouri.

She painted a grim picture. She noted that Missouri's number of abortion providers has dropped from a historical high of nearly 30 to just one today.

"I want to tell you how we ended up here," McNicholas told the assembled lawmakers, "and the dangers we face when state officials abuse their power and disregard patients’ lives to pursue a political agenda."

The hearing, titled "Examining State Efforts to Undermine Access to Reproductive Health Care," marked a relatively rare congressional instance: An examination of abortion not driven by the procedure's most fervent opponents. Indeed, this was very different sort of House committee than the one Planned Parenthood officials faced just a few years ago, when the then Republican-controlled House staged hearings and investigations into debunked claims that clinics sell baby parts for profit. Thanks to sweeping electoral victories in 2018, the House now belongs to the Democrats.

Of course, the abortion opponents were still present. Conservative podcaster Allie Stuckey represented that role of an expert witness for the minority Republican lawmakers, many of whom used their allotted time in attempts to score pro-life points on the only OB/GYN in the room, McNicholas.

For instance, in several exchanges, Republican lawmakers questioned McNicholas about a child "born alive" following a failed abortion. At one point, Rep. Glenn Grothman (R-Wisconsin) asked McNicholas if she would perform an abortion on an eight-month pregnancy whose parents simply "Didn't want another girl."

McNicholas, though, would not entertain the premise.

"That sensationalized hypothetical isn't real, and I've never had that happen before" she said, though that didn't faze Grothman, who shifted course and modified his question — this time, the hypothetical parents came to her at eight months because "they didn't feel they had time to care for a baby. Would you do an abortion then?"

"I just want to reject the notion that people make decision about continuing a pregnancy out of convenience," McNicholas answered instead. "I have never, in ten years of taking cafe of pregnant people, had someone request an abortion because it just wasn't convenient."

Others tried similar tactics. When Rep. Thomas Massie of Kentucky got his five minutes, he questioned McNicholas about the medical consensus for the age of viability for a fetus and was unsatisfied by her response — "There are some pregnancies in which a fetus will never be viable" she noted — and so he switched gears.

"What about the size of the unborn baby?" Massie asked. "Do you know the largest baby you've aborted?"

McNicholas seemed to take this question in for a moment. "I'm not sure how I would even quantify that," she said.

.@RepThomasMassie tries to get Dr. Colleen McNicholas of Planned Parenthood to say she would "abort a viable fetus." McNicholas calmly explains to him that medical decisions don't conform to his blanket, loaded phrasing. "I support people ... making decisions for themselves." pic.twitter.com/ndDly19eVj


If the conservative lawmakers wanted specifics, they had just such an example sitting a few away from McNocholas. Jeni Box, a mother of three and small business owner in Webster Groves, testified to the wrenching choice she faced when doctors told her in 2018 that her unborn daughter, Libby Rose, was at high risk for a genetic disorder, and "if not stillborn, would be born into a life of immediate and repeated invasive medical intervention."

"We knew that the greatest act of love that we could undertake, as her parents, would be to suffer ourselves instead," Box said. "To end the pregnancy, grant Libby peace and spare her tiny, broken body a short life, full of pain."

That decision, Box concluded, "never should have included any politicians."

But in Missouri, restrictions on abortion access are inescapable. Last month, an administrative hearing revealed that the Missouri Department of Health and Senior Services, or DHSS, had logged patients' menstrual cycles in a spreadsheet while searching for examples of failed abortions in the Planned Parenthood clinic.

The revelation made national news, and during the hearing it drew the ire of multiple Democratic committee members — Rep. Jamie Raskin (D-Maryland) said it sounded like something from the The Handmaid's Tale and 1984. Rep. Lacy Clay (D-Missouri), who had encouraged the committee to take up the issue of his home state's abortion crisis, said he had been "truly amazed" by reports of the period-tracking spreadsheet. He stated it reflected efforts by Missouri to "intimidate patients and threaten providers."

Patients seeking the procedure without a 72-hour waiting period or a medical abortion (which uses a pill) without a state-mandated vaginal exam have looked to other states, especially Illinois, to provide the abortion access that conservative Missouri politicians are so eagerly attempting to disassemble.

For now, patients and providers are still coming to the lone clinic in St. Louis. National outrage over the period-tracking spreadsheet has put state health officials on the defensive, with officials facing questions over DHSS' clumsy attempts to produce a pretense for denying the clinic its license. Although Missouri's conservative legislature passed an eight-week abortion ban without exception for rape and incest, which was signed into law by Governor Mike Parson in May, portions of the law remain blocked by a federal judge.

And so, for now, Missouri abortion access remains viable. Reached by phone one day after the hearing, McNicholas tells the Riverfront Times that she had hoped lawmakers would recognize that there's a reality for abortion patients beyond talking points about non-existent babies "born alive" or hypothetical families aborting eight month pregnancies on a whim.

"I found it interesting," McNicholas noted, "that when the anti-choice Republicans asked a question and they didn't like my answer, particularly on medical issues, they turned to the non-medically trained pundit they could rely on."

She added, "I found that very telling."