St. Louis County Man Stabbed Girlfriend for Breaking Up With Him, Still at Large, Cops Say

VIA ST. LOUIS COUNTY PD A previous mugshot of Christopher Wagner, who is charged with stabbing his ex-girlfriend repeatedly. 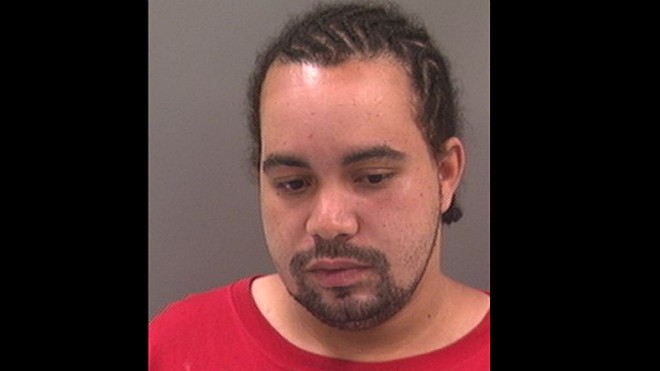 A St. Louis county man who reportedly reacted to his girlfriend breaking up with him by going to her work and stabbing her repeatedly is still at large, police say.

According to a probable cause statement, Christopher Wagner, 38, sent a text message to his 37-year-old former girlfriend on November 10, four days after she had ended their relationship, and threatened to kill her.

The following day at about 3:30 p.m. Wagner allegedly attempted to make good on that threat by driving up to the woman's place of work — the Estates of St. Louis Nursing Home, located at 2115 Kappel Avenue in north county, according to the Post-Dispatch — and stabbing her repeatedly.
Police say the woman was left with serious injuries, but she survived. Wagner fled the scene, but the attack was captured by a surveillance camera, according to charging documents.

The St. Louis County Prosecutor's Office issued charges against Wagner on Wednesday. He is charged with one count of first-degree domestic assault and one count of armed criminal action.

Police are still searching for Wagner, who lives in the 8800 block of Dragonwyck Drive in north county, about a mile from the University of Missouri-St. Louis campus. The investigation is being conducted by detectives from the St. Louis County Police Department’s Bureau of Crimes Against Persons' Domestic Violence Unit.