St. Louis Meteor Rush Is on as Museum Offers $25K Reward for its Capture 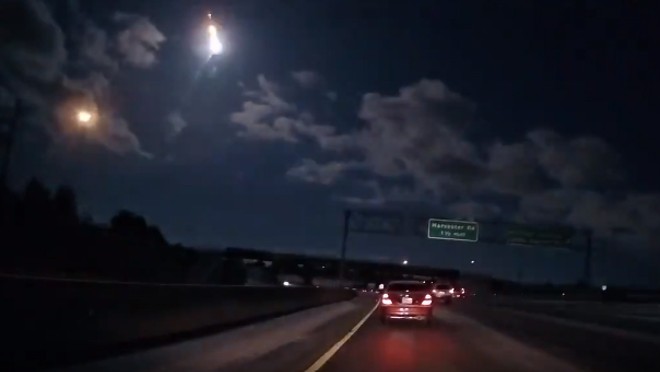 A museum in Maine is offering a cool $25,000 to the first person to bring it a one-kilogram chunk of the meteor that streaked across the St. Louis area on Monday night.

The Maine Mineral and Gem Museum put out a press release on Tuesday announcing the reward and saying that the chunk of space rock will receive a "place of honor in the museum," which is set to open next month.

"It's an exciting opportunity to have a sample from a fireball seen one month before our official opening and we wish to enlist the public's assistance," museum director Barbra Barrett writes. "Preliminary reports indicate a fall site approximately 50 kilometers northeast of Columbia."

Indeed, KMOV spoke to Washington University assistant professor of physics Ryan Ogliore, who says he believes the meteorite is likely somewhere around Wellsville, which is about an hour and a half northwest of St. Louis and not far from Columbia.

"I have a colleague at NASA who actually uses Doppler weather radar to track, instead of falling raindrops, falling rocks from events like this," Ogliore tells the station. "And he has an idea where it might be."

That lines up with the findings of the American Meteor Society, which also believes the rock came to rest "somewhere near Wellsville."

But before you head west in search of your fortune, you should know that experts are divided about exactly what you'll be looking for and whether the hunt is even worth your time.

Saint Louis University associate professor of physics Ian Redmount tells the Associated Press that the rock was likely the size of a fist or baseball when it entered the Earth's atmosphere. When it landed, he believes it would have been a very small chunk of rock, if there was anything left of it at all.

Will Snyder, who manages the Planetarium at the Science Center, tells KSDK it was most likely a tiny rock traveling at thousands of miles per hour.

"We're not talking a huge asteroid that would've been a danger to us, but just something big enough that when it's going fast can really put on a good show," Snyder tells the station.

NASA, meanwhile, has a rosier view of your chances, and has said that the rock was the size of a basketball and weighed some 200 pounds when it entered our atmosphere.

It's hard to know who to believe, but it seems notable that all the local scientists, who are themselves within easy driving distance of Wellsville and therefore more likely to go hunting for that $25,000 reward themselves, are the ones that are discouraging others from doing so. Perhaps they are trying to cut down on competition?

Don't forget: As a wise man once said, science is a liar sometimes. Happy hunting!