Volunteers Allege a 'Purge' is Behind 'Reboot' at St. Louis County Animal Shelter

When an independent audit exhaustively detailed the deficiencies and statistical fraud in the St. Louis County Pet Adoption Center, many of the damning conclusions rang familiar to the shelter's volunteers.

But as the shelter moves to enact the audit's hundreds of recommended fixes — and while county officials also seek to privatize the shelter's operations — the volunteers have been forced out of their positions and told they will have to reapply if they want to return.

In response, two volunteers sued the county on Thursday over the controversial "reboot." The lawsuit, filed in federal court, describes the move as a "purge" of the shelter's 400 volunteers, intended to eliminate those who have criticized "the Shelter’s staff, the Shelter’s conditions, and the poor treatment of the animals housed therein."

In an email to Riverfront Times, Department of Public Health spokeswoman Sara Dayley wrote that the reboot is "by no means an attempt to limit volunteers and their commitment" and argued that the move is simply another recommendation from the audit. In a letter sent earlier this month, Spring Schmidt, co-director of the Department of Public Health and acting director of the shelter, apologized to volunteers "for any confusion and misunderstanding" and insisted that shelter's volunteer program "is NOT being terminated." 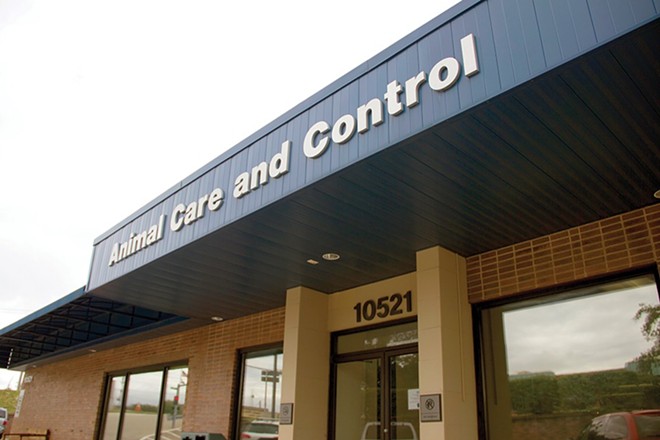 But there's more to this controversy than just a volunteer reapplication process. Deep tensions run through the county animal shelter, which set the stage for the turmoil now roiling the shelter's large force of free labor.

The reboot was officially announced to volunteers in an October 25 email from the shelter's volunteer coordinator, sparking immediate accusations that the shelter was cleansing its ranks. The email literally gave the respondents their two-weeks' notice. Volunteers were told their "last day" under the current program would be November 7 and that they would have to reapply and undergo orientation before returning to their duties.

Two days before the deadline, on November 5, volunteers packed a County Council meeting to demand that the shelter stop the reboot and recognize the harm it was causing to volunteers and shelter's ability to care for its large population of animals.

One speaker was Anne Cashel, a volunteer and former member of the shelter's Advisory Board, which was dissolved by a bill passed by the County Council last month. Cashel is also one of the two plaintiffs in the new lawsuit.

"I find it absurd," she told the council on November 5, "We have had to hire a lawyer to fight for our rights and volunteer to walk dogs and pick up poop for free. Who is going to do that when we are gone?"

Indeed, although county employees were enlisted to fill-in for the absent volunteer force after November 7, to date, only about twenty volunteers have been approved for orientation in the new volunteer program, KSDK reported. That's nowhere near the full labor force of the volunteers. According to data provided by the Department of Health in September, the shelter's records show 403 volunteers, with 119 deemed "regular, active volunteers."

According to the lawsuit, volunteers logged more than 1,500 hours of unpaid labor per month while performing duties like dog-walking and kennel cleaning. For the volunteers, though, their roles also provided a window into the inner workings of one of the largest open-admission animal shelters in the region — and for a vocal segment of those volunteers, they didn't like what they saw.

As reported in a Riverfront Times cover story last month, years of instability in the shelter's leadership have left a legacy of chaos and distrust. The shelter still lacks full-time veterinarians, and its last permanent director, Beth Vesco-Mock, was fired in 2018 amid accusations of bullying and racism.

Those tensions have often been aired at County Council meetings. In the past two years, volunteers and animal activists have doggedly showed up to the meetings to raise the alarm about the shelter's conditions, including overcrowding and an intentionally misleading policy that marked every animal at intake for "owner requested euthanasia" — some of the very concerns the audit would confirm.

The county is now considering privatizing the shelter and is seeking proposals from entities that might want to take over operations of the troubled facility. (Dayley, the spokeswoman for the Department of Public Health, confirmed that a Request For Proposal has been given council approval and that "we are currently working on it.")

In the face of the shelter's struggles, volunteers have taken the matters of rescue and adoption into their own hands. For Jenny Agnew, the second plaintiff behind the recent lawsuit, that meant running the marketing efforts for the nonprofit group St. Louis County SAVE. The organization's Facebook page frequently posts profiles of adoptable shelter animals and raises funds to pay for medical and adoption fees.

The result is kind of a parallel animal rescue network, one that works with the county shelter while also serving as a hub for volunteers to air their firsthand critiques of its conditions and adoption policies. The profiles of shelter dogs up for adoption include behavioral and medical histories derived from Sunshine requests, and those public records are often used to bolster the case that the shelter mishandles adoptable animals and allows them to languish until they're euthanized.

On October 23, Agnew took to Facebook herself to announce that she had been suspended as a volunteer after trying to break up a dog fight. Her post, which was shared nearly a thousand times, also revealed the first details of the plans for the volunteer program reboot.

"They hope to weed out those who advocate for the animals and criticize operations," Agnew wrote, and further claimed that volunteers would soon be relegated to various "tiers" intended to restrict access to parts of the shelter.

In an email to RFT this morning, Agnew wrote that she still plans to reapply to the new volunteer program but added, "If I am rehired, I will continue to speak out to management, the County Council, and the press when I see poor conditions for the animals and employees."