One Does Not Simply End the Delmar Loop Trolley 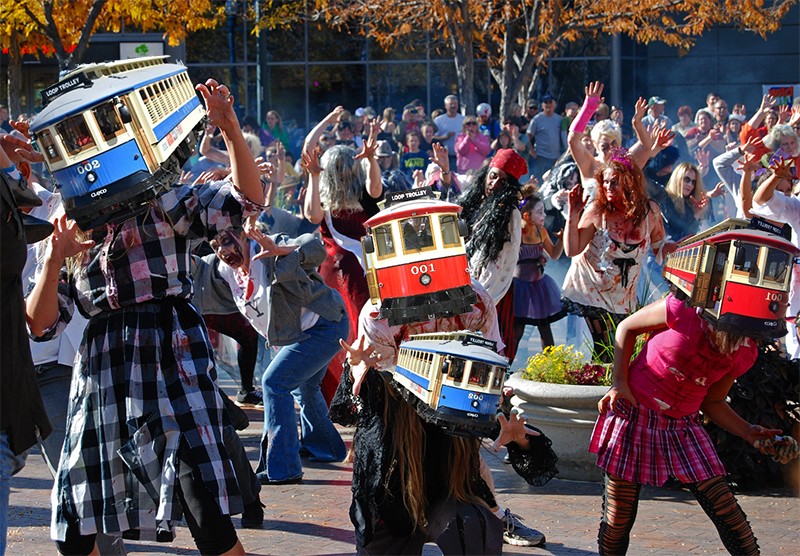 A $90,000 loan will keep the Loop Trolley going through the end of the year, saving the cursed mode of transport from closing next week as it faces spectacular shortfalls in expected ticket sales and ridership.

And unlike the trolley itself, there's no clear way to tow it in the right direction. The loan, which came to light Wednesday night in reports by the St. Louis Post-Dispatch and St. Louis Business Journal, is being supplied by the Loop Trolley Transportation Development District, which takes in a one percent sales tax that partly funded the construction of trolley tracks and infrastructure.

The district, of course, owns the tracks and trolley itself, meaning it's essentially cannibalizing its own resources to continue running two streetcars along the 2.2 mile track, at reduced hours, until January 1.

Like a zombie, the trolley should be dead, but it's not. Instead, the loan comes just weeks after the startling (though not entirely surprising) announcement that the trolley is deeply in the red. In October, trolley officials told St. Louis County that they would need $200,000 just to get through November, and another $500,000 to keep the streetcar clanging into 2020.

With reduced hours, the $90,000 loan is now being stretched to cover the needs estimated just a few weeks ago to require a six-digit investment. For a project whose construciton cost more than $51 million — and an unknown quantity of bicycles and human suffering — this situation is less than ideal.

In fact, the numbers have never seemed so stacked against the trolley's continued survival. As reported by Business Journal last month, the trolley's ticket sales have brought in only around $32,000 since opening, missing their expected target of $400,000 by more than 90 percent.

And while St. Louis County and St. Louis City officials have shown no enthusiasm for doling out more public cash to the trolley, they also appear to be in a bind, since the federal government's $25 million contribution to the project's construction means that the trolley's closure could sour the possibility of other federal funding — a result that County Executive Sam Page has suggested would have "wide-ranging impact on future transportation projects."

So what now? With numbers that don't add up and seemingly endless delays and problems in restoring a third streetcar — which trolley backers explain has hurt the project's expected ticket revenue — the task now falls to the same agency that runs the region's MetroLink and Metro buses, the Bi-State Development Agency.

In a statement, Bi-State spokeswoman Patti Beck told RFT that the Loop Trolley Company contacted the agency, requesting that it "evaluate operating options at avoiding default." In a text to the Post-Dispatch, Bi-State CEO Taulby Roach also confirming that the solution could include a takeover of the entire line.

Would that be enough to turn the Loop Trolley into more than a target for Joy 99.1 FM stickers and memes? Should we just tear the track out and pretend like none of this ever happened? Who knows — but we do have some other ideas.