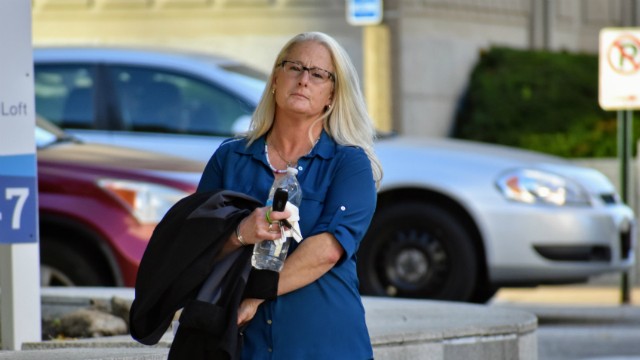 A St. Louis police officer was found guilty today of assault for giving two men a "rough ride" in 2018 after they were taken into custody.

Lori Wozniak, 48, was charged last year with two misdemeanors following an investigation by the police department's Internal Affairs division. The veteran officer was tasked on August 2, 2018, with driving a couple of unruly drunks to the south patrol station for processing.

By all accounts, the men started insulting Wozniak in particularly nasty terms. She reportedly told other officers the two were "assholes" and she was going to slam on her brakes at every stop sign — an old-school cop tactic that sends handcuffed, unbuckled prisoners banging around inside of a cruiser or transport van.

Shortly before they reached the station on Sublette Avenue, Wozniak hit the brakes, causing her passengers to lurch forward on the metal bench seat. One of the men, Matthew Sarich, smacked his head on a grate, opening a bloody gash above his eye. Another officer was following Wozniak and testified that he braked just short of the van's back bumper.

"In this case, the defendant said what she was going to do, she knew what was going to happen if she did, and she did it anyway," assistant Circuit Attorney Jeffrey Estes told jurors during his closing statement. "Then she lied about it."

Wozniak later claimed she was braking for a dog that ran in front of her, but fellow cops were suspicious. That was particularly true of Sgt. Samuel Gilman, who checked the dash cam footage from the ride and reported the incident when the video turned up no sign of a dog.

Wozniak's attorney, Brian Millikan, told jurors there's no way to say whether she saw a dog that night. It's true the vehicle's front-facing camera didn't record one, but it didn't show peripheral views.

"It's perfectly reasonable that an animal ran out in front of that cruiser and the camera didn't pick it up," Millikan said.

He argued that Wozniak would not have told her sergeant she planned to give the men a rough ride if that is actually what she planned to do. He added that she could have easily switched off the dash cam to cover her tracks and that maybe the men could have braced themselves better if they "had not been so drunk."

Estes told jurors it's understandable that Wozniak would have been angry at the men, but she had taken an oath and it was her duty to transport them safely to the station. Jurors saw photos of a blood-speckled van, and they learned Sarich eventually wiped his face on a counter at the station, leaving a blood smear — more evidence of his injuries.

It took jurors about 90 minutes to find the former officer guilty of both counts of fourth-degree assault.

The two-day trial was presided over by Judge Lynne Perkins. He is scheduled to sentence Wozniak on December 13.