On This St. Louis Block, the Houses Keep Burning

Something isn't right on Enright Avenue. Fires are eating through the block's vacant homes. Residents, who have watched their nights lit by the blazes of massive house fires, are wondering if a serial arsonist is at work.

The latest spate of fires started this month. First, on October 7, police found char marks on the floor of an inhabited brick home, which investigators deemed evidence of a break-in and arson. Days later, on October 11, a suspected arson annihilated a vacant home at 5126 Enright, with the flames spreading to the roof of a neighboring home — requiring police officers to stage a daring rescue in order save a disabled resident trapped inside.

There were more fires on Monday in the 5100 block of Enright. This time, two vacant houses burned in an early-morning blaze that, police say, remains under investigation.

"I've lived here ten years. I've seen fires," says one resident, who introduces herself only as Jazz. She has to speak above the sound of a worker sawing plywood, which will be used to board up a previously inhabited home made unlivable by fire damage to its upper floor. 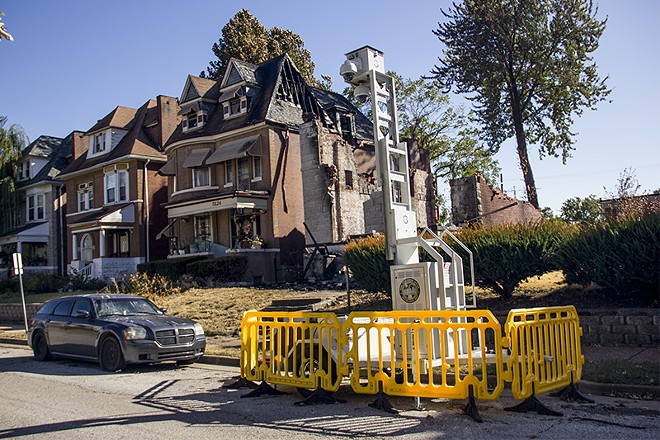 Past fires have left their mark on the block. Jazz points out the gutted and blackened skeleton of 5163. It burned in November, she says, possibly the result of "homeless guys trying to cook something."

But Monday's fires were different. Jazz lives one block north on Kensington Avenue. She watched the blaze from her porch.

"I've never seen it like that, like, such intensity," she says. "It was two in the morning. I stepped out my back porch, and it was like sunset."

Walking along Enright, she comes to 5126. Today it is less a house than a collection of rubble and a cracked concrete staircase, the result of the October 11 fire that razed it to the foundation. The neighboring home is also blackened, its upper windows broken and now awaiting boards. The inhabitants, though saved by the heroics of police, have been forced out for the time being. 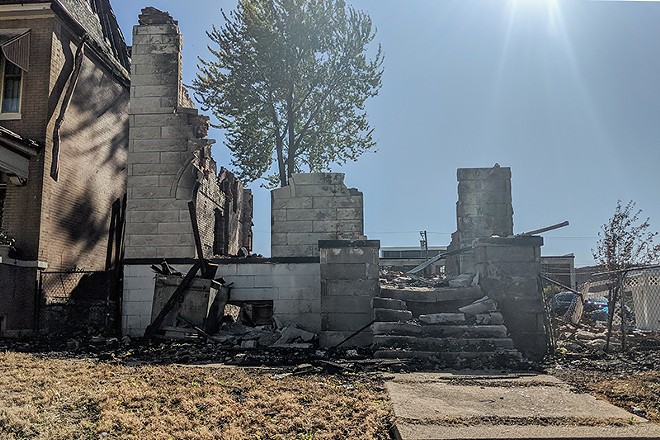 A few feet from the rubble, a mobile surveillance unit left by the St. Louis Metropolitan Police keeps watch. Jazz notes the cameras' placement with dismissiveness.

"It was stupid that the police put this camera here," she says. "Because whoever burned this house isn't coming back to burn this. They're going to come get the rest of them. And they're not going to set it from the front."

The question of who is responsible — A serial arsonist? Teenage vandals? Cooking fires? — remains frustratingly unanswered. After the October 11 fires damaged two houses, CrimeStoppers raised its reward to $6,000 for information on the suspected string of arsons. And while police have not said whether Monday's fires are similarly suspect, the fires are raising tensions on a block that already knows the scars of vacancy, demolition and disinvestment.

Here, the "Delmar Divide" — the shorthand St. Louis uses to describe the vast gap in the living conditions between the metro north and south — couldn't be more clear. The neat row of houses on the 5100 block of Enright is interrupted by empty plots and fields of grass. Walking the block, Jazz notes that older, longterm residents have been forced out of homes due to code violations and unpaid taxes. Developers have snatched up homes on the eastern side of the block, leaving once-inhabited homes as "vacos."

Here, the Delmar Divide is quite literal. One block south of the 5100 block of Enright lies Delmar Boulevard itself. It is this area where the backers behind the burgeoning Delmar Maker District are seeking "to create an environment to attract artisans, designers, makers, and entrepreneurs of all walks of life who will live, make, and sell their goods."

According to property records, all three of the vacant houses on Enright consumed in fire this month were owned by Green Line LLC, which lists the same address as Third Degree Glass Factory — one of the existing anchors for the proposed Delmar Maker District. Records show at least a dozen properties on the 5100 block Enright have been bought by Green Line or other entities listing the same address, hinting at the possible future Enright development next to the Delmar Maker District. 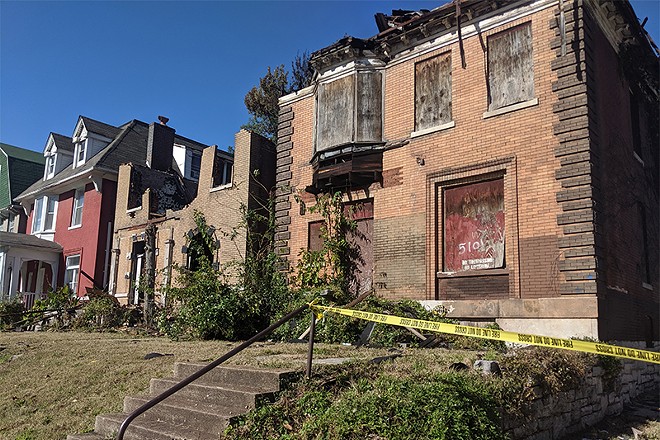 Reached by email, Jeremy Idleman, executive director of the Delmar Maker District, wrote that the district "has been working closely with the leadership in the neighborhood, Third Degree, MADE, and the owners of the buildings in questions" in response to the fires, and added, "Everyone wants to find the person responsible."

Whoever it was, their work left no question as to the intent. Idleman wrote that on October 7, contractors found the back door of 5168 Enright "pried open and an unsuccessfully ignited trail of gasoline throughout the first floor." The home, he added, shares an alley with 5163 Delmar, a former church that was "nearly leveled" by fire the previous night.

In a subsequent press release, Idleman clarified that a total of seven buildings — including two buildings on Delmar — were "intentionally burned" or damaged when flames spread to adjacent structures during the various fires this month.

As for the homes Green Line LCC owns on Enright, Idleman wrote that these are intended to become "lease-to-own" homes for "local artists and employees who work in the neighborhood." However, the buildings that burned were uninsured at the time of the fires, meaning "this is a total cash loss for the developer."

Idleman added that the fires have made the future of the development "unclear at this time."

In a statement included in the press release, Doug Auer, co-founder of Third Degree Glass Factory and the MADE makerspace on Delmar — both businesses listed as anchors to the proposed Delmar Maker District — said the development's backers are "devastated by these events," adding that "we want to ensure our community that we are doing everything we can to find out who is doing this."

Along with Auer, the website for the Delmar Maker District lists a second co-founder, Jim McKelvey, who also co-founded Third Degree Glass Factory and MADE. However, McKelvey went on to leave a larger entrepreneurial footprint: He made his name in tech by co-founding the mobile payment behemoth Square with fellow St. Louisan Jack Dorsey. This past summer, Dorsey announced an effort create a "St. Louis Blight Authority" to support efforts in tearing down abandoned buildings in north city.

That effort, of course, doesn't involve burning down houses on Enright Avenue. Jazz says the theory of a single arsonist sounds "a little funny" when, at the same time, the street is being targeted for major redevelopment.

Another resident on Enright, who lives next to one of the houses damaged by fire, summarizes his feelings in two words: "It's scary."

To date, police have not released any updates about the suspected causes behind this month's fires on Enright. Anyone with information can call CrimeStoppers at 866-371-8477 (TIPS).


Editor's note: The story was updated after publication to include details from Jeremy Idleman and a press release sent by the Delmar Maker District.