Josh Hawley Gets Clowned on by Washington Post Writer 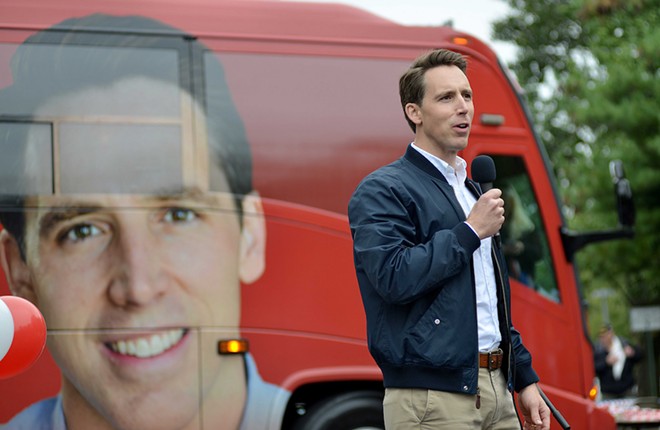 Hero to the middle class Josh Hawley took a momentary break from working the land and putting up the fall harvest to fight a Twitter war against a Washington Post writer who dared to insinuate the senator's righteous victimhood was the slightest bit disingenuous.

It started with Hawley reading — by candlelight in a sturdy farmhouse he built with his own hands — an essay in the Post by a former federal researcher whose department angered the Trump administration by publishing papers that revealed politically problematic data, such as the fact that food stamps helped local economies. In response, the Economic Research Service was getting kicked out pf Washington, D.C., a move the data scientist in the piece, Andrew Crane-Droesch, contends was designed to push staffers to quit rather than uproot their lives and families and move.

The agency was eventually sent to Kansas City. Hawley — whose resume says Rockhurst all-boys prep school, Stanford undergrad and Yale law school, but who is really a lineman for the telephone company at heart — sniffed out the very real insult and leapt to defend our honor.

"DC bureaucrats aren't actually saying out loud that moving to Missouri is ... punishment, are they? Because surely nobody could be that condescending & elitist," tweeted Hawley.

I assume this is a parody, right? DC bureaucrats aren’t actually saying out loud that moving to Missouri is ... punishment, are they? Because surely nobody could be that condescending & elitist. https://t.co/TyNT5cXqaQ


The Post's Greg Sargent, who must not know that Hawley continues to work the third shift at a steel factory even after it closed because he made a goddamn commitment, responded, accusing the gentleman from Missouri of "phony pastoral posturing."

What's really "condescending" here is the sort of smarmy, smirking contempt for people's intelligence that @HawleyMO is displaying. Coming from a leading intellectual light of the new "conservative nationalism," this unmasks the phony pastoral posturing that lies at its core. https://t.co/tMHpkqS2LX


This guy clearly hasn't seen the son of a banker humble farmhand wear jeans and a plaid shirt just like the rest of us good people in the Heartland. And if he thought Hawley was just going to walk away, carrying his lunch pail to join the morning road construction crew, he was sadly mistaken.

"Only a smug, rich liberal elitist would say that defending your home is 'phony pastoral posturing,' whatever that means," Hawley tweeted. "No, Greg, I don't think living Missouri is 'punishment.' But this is the new left: utter, open contempt for the people of the heartland and all we love."

Only a smug, rich liberal elitist would say that defending your home is “phony pastoral posturing,” whatever that means. No, Greg, I don’t think living in Missouri is “punishment.” But this is the new left: utter, open contempt for the people of the heartland and all we love https://t.co/0F8e3OZttq

Now, most of these coastal elites would have taken their Missouri whippin' and Ubered it back to the wine bar. But this Sargent went on to write about growing up as the son of a cabbie in New York City among many non-whites and even Jews who were trying to make rent and raise families, as if there were any middle class outside of Middle America.

This is clearly a bunch of crap, and if Hawley isn't too tired from his responsibilities as a single mom, supporting five kids on a nurse's salary, he's definitely going to put this latte drinker in his place.