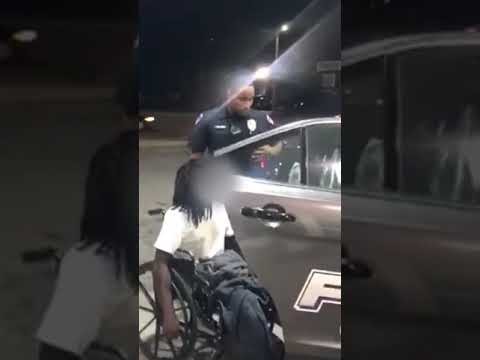 It's not everyday that a cop repeatedly invokes "the mayor" during an arrest. But that's exactly what appears to be happening in a year-old video that shows an officer with the North County Police Cooperative in the midst of arresting a man in a wheelchair.

The 89-second video, which was provided to Riverfront Times by ACLU Missouri, is now at the center of a lawsuit alleging that the officer, identified only as "T. Williams," violated the First Amendment rights of Dellwood resident Sarah Townsend, who filmed the incident at a Mobile gas station in Dellwood last year.

According to the lawsuit, Townsend had gone to the gas station on the night of August 26, 2018, planning only to buy gas and a soda. During the visit, the suits claims, "a man using a manual wheelchair approached her and engaged her in conversation."

That conversation was soon interrupted by Officer Williams, who wheeled the man away from Townsend, the suit alleges. That's when Townsend started filming. (The clip was edited by the ACLU to blur the face of the man being arrested.)


The clip begins with Townsend asking the cop why the man in the wheelchair is under arrest, while the man protests that he was just "using her [Townsend's] phone."

Quickly, though, the situation gets tense. On the video, Williams approaches Townsend and says, "Can you go back over there because this has nothing to do with you, absolutely nothing." He then appears to strike the phone, and, according to the lawsuit, "[G]rabbed her phone, and threw it forcefully into her vehicle through an open window."

(Here, however, the video appears to show Williams actually using the door handle to open the car door before tossing the phone inside.)

In any case, Townsend retrieves the phone and continues filming, and manages to capture portions of Williams' explanation to the man in the wheelchair.

"They called," Williams can be heard telling him, "they called and said you were begging and harassing."

At this point, the man shouts to Townsend, "Ma'am, was I begging or harassing you?"

The cop, though, returns to explaining to the man the complaints that brought police attention to the gas station.

"You already know, we've dealt with you 26 times," Williams can be heard saying. "Bro, I'm telling you, when I said they went to the mayor about you — the mayor, bro. Like, literally."

"What is he being arrested for?" she asks again. Now Williams responds to her, "Can you please get out of my face?"

According to the lawsuit, at this point Townsend was fifteen feet away from Williams. In the video, he approaches Townsend, who protests as the officer again takes her phone, and this time, turns it off.

The lawsuit claims that, after taking her phone a second time, Williams threatened Townsend with arrest and added, "Fuck you bitch; get the fuck out of my face." Williams did eventually return the phone to Townsend, who, the suit notes, was ultimately not arrested in the incident.

So, who is "the mayor" referenced by Williams? It's not clear. The North County Police Cooperative arose out of Vinita Park's takeover of policing in nearby Wellston, and the re-named "cooperative" eventually expanded its footprint to include Charlack, Pine Lawn and Vinita Terrace.

A message left with the North County Police Cooperative was not returned by press time. Reached by phone, Dellwood Mayor Reggie Jones told RFT he was not aware of the lawsuit or incident at the gas station, but added that, in general, he is "very pleased" with the service provided by the police co-op.

However, the lawsuit does not focus on basis for arresting a homeless man at a gas station, but rather on the First Amendment rights violated in the incident. Along with ACLU Missouri, Townsend is being represented by the First Amendment Clinic at the Washington University School of Law.

"Sarah Townsend acted appropriately,” the clinic's director, Lisa Hoppenjans, said in a press release. "Her brave attempt to exercise her rights was met with conduct that was not just unprofessional but also unconstitutional. Our Constitution does not allow this type of retaliation."

The lawsuit, which can be read in full here, seeks unspecified damages and legal fees.