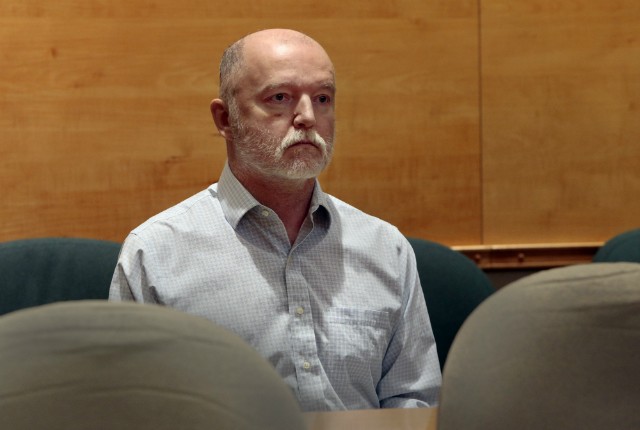 Lawyers for a man executed for murder in Tennessee want evidence tested to see if it matches Thomas Bruce, the suspect in last year's cold-blooded killing at the Catholic Supply store in Ballwin.

Bruce, 54, of Jefferson County had taken an avionics course in 1985 in Millicent, Tennessee a few months before a 19-year-old Marine Corps lance corporal there was viciously raped and murdered when she went out for a jog, according to a new petition filed in Shelby County, Tennessee court.

A man named Sedley Alley was convicted and ultimately executed in 2006 for the fatal attack on the victim, Suzanne Collins, but his family has long maintained he was pressured into a false confession. The Innocence Project has taken up the case, and co-founder Barry Scheck announced at a news conference that lawyers had received a "chilling communication" from St. Louis investigators, seeking information in the case and raising the possibility of ties to Bruce.

"There was some information that perhaps he was a serial killer," Scheck said on Monday in Nashville.

Even before Bruce's arrest, investigators had begun to explore the possibility that the Catholic Supply killing was the work of an experienced criminal. The Jefferson County man is accused of staking out the shop, which sells religious items, during a visit in November 2018, and then returning with a handgun. He ordered workers and a shopper, 53-year-old Jamie Schmidt, into a back room where he made the women disrobe and ordered them to perform sexual acts on him, police say. Investigators believe Schmidt refused, and Bruce shot her in the head.

It was a violent, calculated crime and law enforcement throughout Missouri and beyond and began checking open cases in search of a pattern. Police in Indiana contacted St. Louis County police after noticing physical similarities to a mysterious man who was possibly tied to the killing of two teens there. And police in the St. Louis area have also been looking for other possible cases.

In January, Bruce was charged in Jefferson County with kidnapping, burglary and sexual abuse after a 77-year-old woman who had been attacked in her home told investigators she recognized Bruce's mug shot from media coverage of the Catholic Supply killing.

In Tennessee, Scheck says Bruce left the avionics program before Collins was ambushed, but they're investigating whether he might have returned for a graduation ceremony scheduled for the day after the attack. Scheck says Alley, who like Bruce, had served in the Navy, told family members he was severely intoxicated the night of the crime and had little memory of those hours when Collins is believed to have been killed, but he didn't believe he was involved. He claimed to his death that investigators had coerced him into confessing to something he didn't do.

In a Tennessee court filing, attorneys for Alley's family cited suspicions about Bruce in a request to conduct a DNA test on a pair of red men's underwear found in 1985 next to Collins' body. Defense lawyers had tried while Alley was alive to persuade a court to order the test, but they were denied. Scheck says Tennessee law has changed since then, and the underwear could be the key to determining whether the state executed the wrong man.

Aside from the recanted confession, there was little else to tie Alley to the case, Scheck says. Early theories in the case had Alley hitting Collins with his car, and later stabbing her in the head with a screwdriver recovered from his vehicle. But blood found on the car turned out to be from a bird, and tire tracks and a footprint from the crime scene didn't match Alley, Scheck says. And an autopsy turned up no sign that Collins had been stabbed in the head with a screwdriver, he says.

"This, on the face of it, looks like a false confession," Scheck says.

The Innocence Project had previously sent a request to prosecutors to preserve evidence in the case. When St. Louis investigators started asking around, the organization sent an investigator to see if the underwear was still there. Scheck says it is and could still be tested.

"This is the kind of crime that somebody enraged, certainly somebody engaged in serial killing might have committed," Scheck says. "Don't you want to find that person if it was not Sedley Alley?"