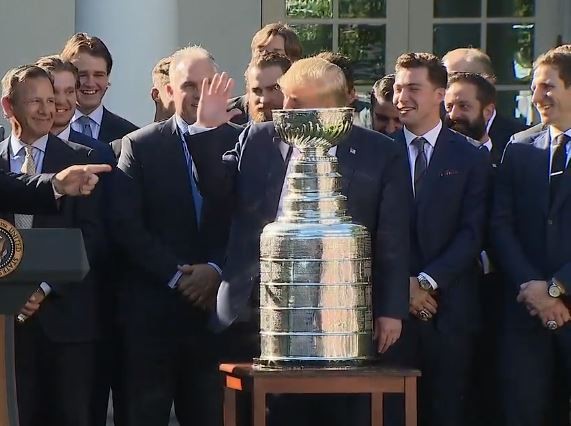 Donald Trump, America's extremely wise president, met with members of the St. Louis Blues today, ostensibly to congratulate the team — composed mostly of Canadians — on winning the 2019 Stanley Cup back in July. He did do this! He also said and did a lot of weird stuff.

And yeah, they played "Gloria," a song whose backstory and connection to the team was summarized by the president himself, who used the opportunity to A) somehow further ruin a song that's already irreparably ruined, and B) get in a jab at the media, because why not?

"It's a 'win' song," said the president. "That's why we played it, otherwise the fake news would criticize me."

But before he could throw in more zingers, Trump, not missing a beat, looked to his left and caught sight of Blues player Alexander Steen, who is sporting some broken front teeth due to the nature of playing a sport where people and their faces crash into things quite a lot.

"Look at that guy," said the president, fully distracted from his previous dissertation on the concept of a win song. "Look at the mouth on that guy."

“You think I could take him in a fight? I don’t know.”

Trump then points to his teeth:

“How do mine look? No hockey." pic.twitter.com/9ZZWzK3M1J

Moving on: At one point, Trump invited U.S. representative Billy Long (R-Missouri), a noted auctioneering aficionado, to hold a mock auction for the Stanley Cup — which, of course Trump won.


So you've got pageantry. But no official White House event would be complete without Trump yukking it up with Blues players by, what else, complaining about those darn lazy and very fat agents.

During White House event with the St. Louis Blues, Trump disses sports agents: "Those agents, right? They sit in bed, they weigh 350 pounds, and they complain, 'you're not playing very well today, c'mon.'" pic.twitter.com/GECGxTOMbF


There is, of course, more bizarre Trump-brain moments here, including attempts to joke with the players about the ongoing impeachment inquiry, lavishing praise on U.S. Senator Josh Hawley, and asking star goalie Jordan Binnington, "Have you always had good reflexes?"

But Trump also took the opportunity to remind everyone that, outside this fantasy world of sports and fake auctions, he is holding Turkey accountable for invading Syria — a thing he essentially invited — and said "We're asking for a ceasefire," adding further that if Turkey does not comply the U.S. could impose "massive tariffs" to Turkish steel.

Still, on the upside, Trump managed to make it through the ceremony without offering to buy Canada, declaring a massive hockey tariff or appointing Jordan Binnington to be Secretary of Defense.

You can watch the whole thing here: