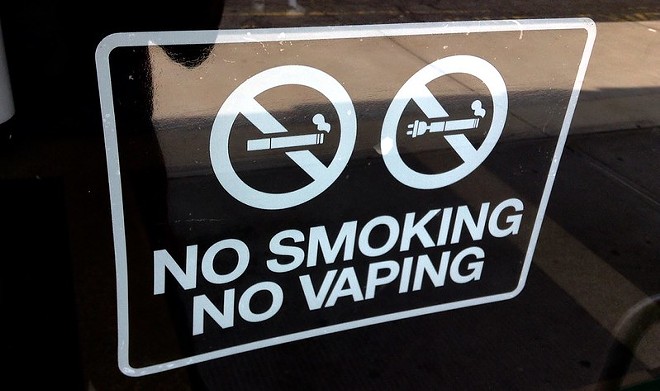 In an interview, Clayton-based attorney Cindy Ormsby tells Riverfront Times that the Francis Howell lawsuit is part of a coordinated package of litigation filed by school districts across the country, each dealing with a similar crisis of students addicted to nicotine. Francis Howell's suit was filed in the U.S. District Court in the Eastern District of Missouri on Friday.

"School districts are having to help kids not be addicted, and they don't have the resources to to deal with these issues," Ormsby says, and she argues that the district finds itself in a similar position to states suing opioid manufacturers.

The bottom line is that companies which profited are responsible for the vast health costs associated with addiction, and she says Francis Howell is just "trying to get some relief for the cost they're having to devote to this issue, which is taking money out of the classroom."

In an 81-page complaint, the district alleges that Juul intentionally marketed its products to children, created a public nuisance by getting kids addicted nicotine, and also endangered its underage customers' health.

According to the lawsuit, the district's statistics for student "tobacco-related infractions" — what Ormsby tells RFT are disciplinary cases related to e-cigarettes — skyrocketed at the same time Juul products hit the market: In the two school years running from 2015 to 2017, the district recorded 113 tobacco infractions. In 2018 alone, that number hit 270. The 2019 school year may top that, as the number now stands at 248 — including several cases where elementary school students were busted with vapes.

Rampant Juul-use among students has resulted in huge costs to the Francis Howell district, Ormsby says, and the problem is widespread and harder to detect than traditional cigarettes. She notes that vaping is virtually "undetectable," meaning that students are vaping in the classroom, in bathrooms and hallways. She argues that simply throwing kids in detention isn't going to address the root problem, which is the chemical dependency puffed through the easy-to-procure vapes.

After all, you're not going to cure addiction with after-school assignments.

"You can't blame the kids all that much," Ormsby says, "because they're addicted to nicotine, because of [Juul's] advertising to youth."

Indeed, Juul has recently come under fire for the way its product keeps winding up in the hands of kids, as well as a recent spate of a mysterious and sometimes fatal lung illness observed in people using black-market vape products. Last month, Juul announced that it would halt all advertising in the U.S., replace its CEO and discontinue its the sale of non-tobacco and non-menthol-flavored Juul "pods," as critics argued that the candy and fruit flavors were enticing teens and children.

The Francis Howell School District, which enrolls more than 17,000 students, is just one of multiple planned lawsuits filed as a part of a "mass tort" against Juul, Ormsby says. The litigation, which is not class action, is being led by Kansas City-based firm Wagstaff & Cartmell.

Responding to the announcement the Kansas City-area lawsuits, Juul defended its product in a statement to Education Week, "Our product has always only been intended to be a viable alternative for the one billion current adult smokers in the world. We have never marketed to youth, and do not want any non-nicotine users to try our products."


Editor's note: The story was updated after publication to include details from the complaint, which was filed Monday afternoon. The story was also updated to accurately cite the complaint's description of the district's vape-related disciplinary records