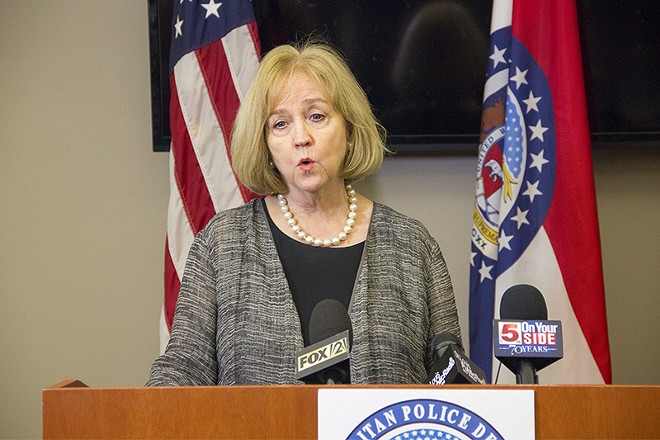 Two years after the acquittal of former St. Louis cop Jason Stockley, an officer deployed undercover during the ensuing protests is now suing the cops who beat him — and he's accusing city leaders, including St. Louis Mayor Lyda Krewson, of complicity in the cover-up.

It is Krewson, in fact, whose behavior is highlighted most notably in the civil rights lawsuit filed Monday in federal court by Detective Luther Hall. On the night of September 17, 2017, shortly after Hall had been treated for his injuries sustained during a violent arrest, the lawsuit alleges, he shared an elevator ride with Krewson inside police headquarters.

In Hall's telling, Krewson remarked about his injuries, saying, "Oh, they messed up your cute face."

Aside from sounding like a shockingly casual thing to say to anyone who was visibly wounded from a beating — the suit says Hall had to get stitches to close "a hole in his face above his lip," among other injuries — the lawsuit argues that Krewson's comment supports its charge that the mayor hadn't just recognized Hall's "cute face," but that she knew he'd been serving as an undercover officer and what his injuries signified.

The lawsuit makes the case that Krewson, who is one of twelve defendants, "knew Hall was working in an undercover capacity because of surveillance footage he had provided" during briefings that weekend.

Krewson, in an emailed statement to Riverfront Times, countered the lawsuit's description of that night. She writes that she doesn't remember riding the elevator with Hall or making the comment quoted in the suit.

"I saw Luther Hall Sunday evening when he was walking around in the Real Time Crime Center," she writes. "[Acting Police Chief Lawrence O’Toole] introduced us. I did not know who he was previously. He had some cuts on his face."

That timing of this interaction is significant. September 17 was the third day of the protests after a St. Louis judge found Stockley not guilty of murder in the 2011 shooting of Anthony Lamar Smith.

That night, while Hall had been deployed undercover amid the protesters, officers maneuvered into a "kettle" formation around the intersection of Washington Avenue and Tucker Boulevard, blocking protesters from leaving — and then arrested more than 80 people, charging them with "failure to disperse." But it turned out that the kettle had captured more than protesters, as officers seemingly made no distinction between the vandals and the peaceful demonstrators, uninvolved pedestrians and even residents of the area.

Caught in the chaos was Hall, who had been tailing "some demonstrators who started breaking windows and flowerpots," the lawsuit states.

Hall's recollection of that night is strikingly familiar to the civil rights complaints aired by protesters in St. Louis and in Ferguson. Hall, the lawsuit continues, "never heard an order to disperse before police officers began firing [pepper balls] and macing the crowd and saw no justification for this use of force by the officers at the scene."

Hall would later tell investigators that the officers "beat the fuck out of him like Rodney King."

According to the lawsuit, "Hall was surrounded by police officers who beat him with their batons and fists and kicked him with their boots. He could feel blows landing all over his body to include his neck and the side of his head... When officers told Hall to put him hands behind his back, they were standing on his arms."

After Hall had been separated out from the other arrestees, the lawsuit claims that he was transported to a triage center by Krewson's own driver.

The question is: What did Krewson know at the time?

This is where the mayor's alleged comment to Hall in the elevator becomes more than just a weird quote in a lawsuit: If Krewson did know that Hall had been beaten by other officers as early as that very night, it raises questions about her comments in the coming days.

In a press conference On September 18, for instance, the lawsuit notes that Krewson thanked first responders, saying, "Law enforcement has my full support." At another press conference several days later, the suit adds, Krewson "denied knowing anything about an undercover police officer being injured on September 17, 2017, even though she had seen Hall was injured" that same day.

What Krewson and other city officials knew of Hall's beating, and when they knew it, could play a key role in the lawsuit; citing her comment in the elevator, the suit accuses the mayor of showing "deliberate indifference to or tacit authorization" of the police misconduct that brutalized Hall.

The lawsuit also names Lt. Col. Lawrence O'Toole, the interim chief at the time. O'Toole had cheered his officers' conduct just one day after the September 17 kettle, telling reporters that they had "owned the night."

The legacy of that night, however, is a creeping stain on the department, one that's already led to more than a dozen lawsuits filed against the city. The beating of Hall has already resulted in criminal charges.

And indeed, Hall's lawsuit names officers Dustin Boone, Randy Hays and Christopher Myers, each of whom is facing federal charges in connection to the beating. A fourth officer, Bailey Colletta, who is named in the lawsuit, pleaded guilty and was terminated from the department earlier this month after admitting she lied to an FBI agent and a grand jury while trying to protect the other cops.

You can read the full lawsuit here: