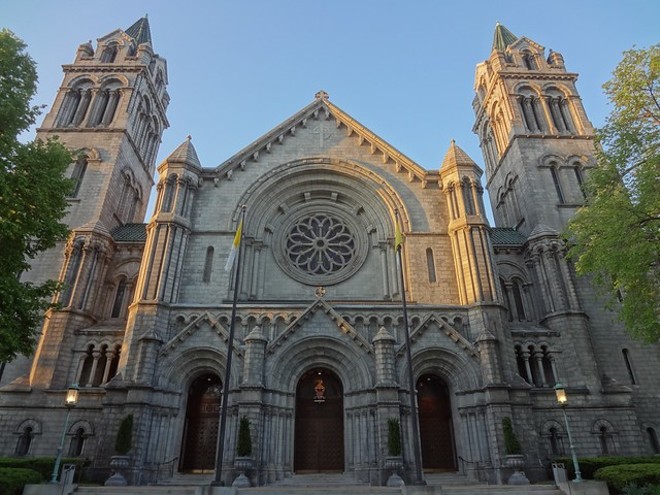 In what is being called the largest-ever independent review of Missouri church personnel records, a long-awaited report from the state Attorney General's Office revealed patterns of abuse and church-enabled cover-up stretching back more than six decades — and it cites "substantial evidence" that 163 Roman Catholic priests and clergy members abused minors.

In a press conference this morning, Missouri Attorney General Eric Schmitt said his office had spent more than a year reviewing the church's files on some 2,000 priests and hundreds of other church personnel.

"We reviewed every single available personnel report of every single priest," Schmitt said, noting that his investigators' access and now-public disclosure of internal church files "is the first to which had been undertaken by any organization outside the Roman Catholic Church."

But with the enormous span of the time covered — some records went back as early as 1945, Schmitt said — 46 cases are beyond the statute of limitation for bringing criminal charges.

In fact, vanishingly few of the priests will face the possibility of prosecution. For one thing, of the 163 priests whose records show that church officials were aware of abuse allegations lodged against them, half are already dead. Setting aside the cases already too old to prosecute, Schmitt said that only twelve cases remained that weren't already prosecuted or investigated by police.

Schmitt said his office is now in the process of formally referring those cases to local prosecutors.

"If there are cases in which local prosecutors should seek our assistance," he said, "we stand ready, willing and able to assist them."

At 329 pages, the attorney general's report represents a mammoth undertaking, one that provides a window into the landscape of a statewide church cover-up that's gone on for generations, racking up victims while officials moved offending priests around the state.

"No corner of Missouri was spared," Schmitt said. "For decades, faced with credible reports of abuse, the church refused to acknowledge the victims and instead focused their efforts on protecting priests."

Among the dozen cases referred for prosecution is a priest "accused in 2009 of sexual misconduct involving inappropriate electronic communication with an elementary school aged child"; a priest accused of "numerous acts of sexual misconduct, boundary issues and fondling"; and a priest who had already confirmed to church officials "reports of abuse of minors and of [his] sexual relationships with adults."

In summary, the report describes the priests' offenses as ranging from violation of "boundary issues," such as inappropriate correspondence with children, "to forcible rape as defined by Missouri statute."

But while the report itself presents searing accounts — all 163 of them, with the write-ups of abuse targeting elementary- and high school-aged children — it does not include the priests' names.

To explain this absence, the report cites a Pennsylvania Supreme Court decision from 2018, which ruled that the state could not reveal the names of priests who were under investigation by a secret jury investigation, as the clergy had not yet been formally prosecuted (thus retaining their Constitutional right to due process.)

How many minors suffered abuse? It's not clear. The report concedes, "It is impossible to quantify the number of victims based on the information available to the AGO," — but adds: "Instances of priests abusing more than one victim are frequent."

Between the restrictions on naming the priests and the sheer number of cases involved, the report's actual contents are largely made up of brief descriptions of the accused priests, their victims, allegations and current disposition. Often, it appears that priests were the subject of repeated warnings to church officials, but these men were given multiple opportunities to relocate into new parishes and church positions.

For example, here's how the report describes "Priest 118," who abused young children seemingly without consequence. (Again, it's important to remember these details are coming from the church's own personnel file.):

Report of molestation of elementary school aged children received in 1963. No record of any action on report other than examination of Priest 118 during which he admitted to abuse of minors but no action on ministry appears to have been taken.

Prosecution barred due to the death of the priest.


Although the report's findings are structured primarily around the priests accused of directly committing the abuse, it doesn't entirely ignore church officials.

In one case, for instance, the report describes the church's aggressive defense of an accused priest who was actually charged with a crime. For "Priest 117," the Archdiocese "spent extensively" to defend a priest whose adult victim came forward in the mid-90s to report abuse that had started when the victim was in elementary school.

Although Priest 117 was indicted in 2005 and subsequently sentenced to prison, the church's spending on defense attorneys paid off: According to the report, "his appeal was ultimately successful and his conviction reversed due to the statute of limitations in 2006."

But church files show that, while the defense attorneys worked to free Priest 117, the Archdiocese was simultaneously receiving additional reports of abuse against him. Between 2002 and 2014, a total of five other victims had come forward with accounts that Priest 117 had abused them as teenagers.

The report notes that the church's "Internal review of reports of sexual abuse [against Priest 117] not commenced until 2007" — that is, one year after his conviction was reversed.

Of Priest 117, the report concludes:

It is unclear when he was removed from ministry. Placed on administrative leave in 2002. Accountability plan put in place in 2011.


In a statement to the St. Louis Post-Dispatch, Archbishop Robert Carlson noted that in August 2018 the Archdiocese had invited then-Attorney General Josh Hawley to review its personnel records, and that it had provided state investigators "full cooperation and unfettered access to archdiocesan records."

"Following that investigation and today’s report, the Archdiocese of St. Louis remains committed to working with authorities, to bringing healing to victims and their families, and to ensuring a safe environment for all of our children," Carlson said.