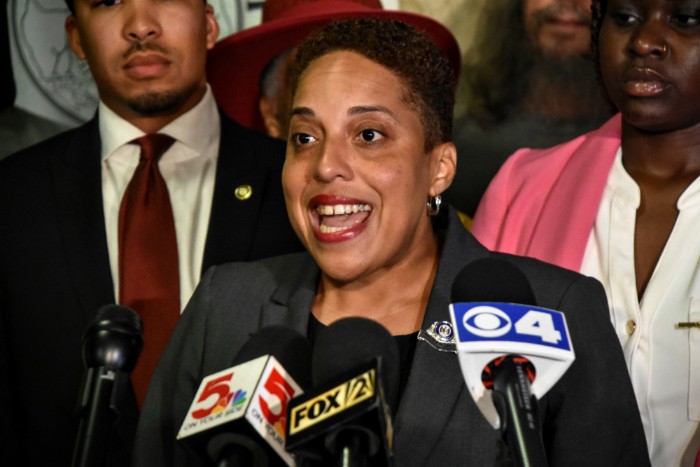 It doesn't take much to stoke new controversy around the polarizing figure of St. Louis Circuit Attorney Kim Gardner. In the latest round, calls for Gardner's resignation have come down to a single word she tweeted last week:

Gardner's terse message of approval came in the context of a lengthy thread from St. Louis Alderwoman Megan Green, who had sought to connect that day's fatal police shooting of a 28-year-old black man, Cortez Shepherd, with a larger argument about whether police should ever be able to use the mere suspicion of marijuana possession as "probable cause" to initiate a confrontation with a suspect.

Green, who represents Ward 15, tagged Gardner in the tweet and noted that the circuit attorney had already made it policy to refuse prosecuting marijuana possession cases of less than 100 grams.

"[O]ur police also need to be instructed to abide by these rules," Green wrote in the tweet. "This is a waste of Police resources. This interaction never should have happened."

And that's when Gardner joined the fray. About an hour later, Gardner's Twitter account shared Green's post. Her commentary on Green's tweet — "Exactly" — has now drawn condemnation from police union officials at both the national and local level.


On Monday, during an interview on the Marc Cox Morning Show on 97.1 FM, Jeff Roorda, the business manager of the St. Louis Police Officers Association, continued his long campaign against Gardner — and he hammered at the implications of Gardner's statement on the shooting.

"This woman needs to go, she's a menace to society," Roorda said in the interview, which quickly went from Roorda's run-of-the-mill critiques of Gardner — such as her "propensity to plop down the race card" — to calling for the prosecutor's removal from office "by force or by choice."

Even for Roorda, who has gone as far as publishing a Christmas carol parody with Gardner as the Grinch, the suggestion that a sitting prosecutor would be removed "by force" is a new benchmark in the ongoing battle between Gardner and her opponents.

Roorda, who in the past has blamed Barack Obama for officer deaths and earlier this year wished ex-Ferguson officer Darren Wilson a "Happy Alive Day" on the occasion of the fifth anniversary of Michael Brown's death, told Cox that Gardner had ethically compromised her office.

"She's supposed to look at this case objectively," he said, "and she's tweeting her ignorance to the rest of the world."

But beyond Gardner's tweet, the status of St. Louis' marijuana laws, in the context of a regional legalization push, complicates the narrative of good cops taking down a bad guy with a gun.

On the flip side, though, is the fact that even at the time Gardner sent her tweet, the early police statements indicated that there was more going on than just marijuana possession. In an early-morning press conference hours after the shooting, St. Louis Metropolitan Police Chief John Hayden stated that the incident took place at 12:50 a.m. on a mostly vacant street in the Greater Ville neighborhood, an area officers recognize for "heavy drug activity," the chief said.
Multiple people had gathered around a vehicle, and a seven-year-old girl — the daughter of Cortez's girlfriend — had been sitting in the back seat when police said they spotted the marijuana on the man's lap. Hayden said that officers ordered Cortez out of the car, but he'd refused. One officer tried tasering Cortez, but that didn't work, the chief said.

According to an incident report, the confrontation turned deadly after an officer spotted Cortez trying to withdraw a revolver from his pocket. "A struggle then began as the suspect attempted to retrieve the firearm," police claimed in the report.

The struggle ended with a second officer putting a bullet in Cortez's chest. Cortez was transported to a hospital, where he was pronounced dead.

Later that afternoon, the police department added its own perspective, posting images of the tape-wrapped revolver and various drugs recovered at the scene, including what appears to be a very small amount of marijuana.

Below are the suspected narcotics and the fully loaded revolver recovered from the officer-involved shooting scene in the 3900 block of Garfield. The Force Investigation Unit is handling this ongoing investigation. https://t.co/gu8nehZa9r pic.twitter.com/3kA37DFpav

In an interview Monday, Alderwoman Green, whose Twitter thread sparked Gardner's response and the subsequent controversy, said that she'd read an early news report by the St. Louis Post-Dispatch about the incident before composing her tweets.

Green acknowledged that, given Cortez's background and the additional details about the incident, such as the presence of a young child in his car, officers "probably had some other grounds for probable cause" than the marijuana possession.

Cortez also had a complicated background. As subsequent news reports soon revealed, he had recently been paroled after nine years in prison; he'd been serving a sentence for a 2010 incident in which he'd stolen a car with a toddler sleeping in the backseat, led police on a car chase, crashed into a police car and punched a cop who was trying to arrest him.

"I caution us not to get hung up on individual cases," Green said, "because we can't go back in time, we can't change what happened."

And even if Cortez deserved police attention, the result of a conviction for drug and firearm charges "would not have been death," she added.

In the interview, Green noted that the known details of the confrontation between the officers and Cortez are entirely based on the officers' own reports. Without bodycam footage or other witnesses, she added, "we will never know what the interaction was that led to this tragedy."

What we do know, according to police, was that it was the presence of marijuana that pulled officers into contact with Cortez, and it's this very type of marijuana enforcement that's "fraying trust" between the community and police, Green said.

Indeed, even after St. Louis City decriminalized marijuana in 2014 — which which turned the punishment for marijuana possession into a municipal citation instead of state charges — the citations continued to fall disproportionately on black suspects.

To Green, the current state of marijuana enforcement in St. Louis is broken, and with the legalization of medical marijuana in Missouri and recreational marijuana in Illinois, she argues that using marijuana possession as probable cause makes even less sense.

"We can recognize there are soon going to be people in legal possession of marijuana on their person," she says. "We need training, and I think that will produce better policing with other means of probable cause than marijuana. We need to adopt police practices to make sure we do not end up with situations like this."

On Monday, RFT reached out to the Circuit Attorney's Office through a spokeswoman for comment, but our emails were not returned. Later that evening, however the Post-Dispatch reported that Gardner "called on the unions to work with her office instead of against it."

Gardner, in a statement to the newspaper, didn't appear to back down — but she also didn't offer any more explanation of her thoughts on the way police handled the Cortez case. Addressing the criticism from the police union officials, she said only that, "Enough is enough."