A former St. Louis police officer admitted in federal court today that she had lied to both the FBI and a grand jury when questioned about the violent arrest of an undercover police officer during the Stockley protests in 2017.

The Post-Dispatch reports that Bailey Colletta, 26, pleaded guilty to a federal charge of making false statements before a grand jury on Friday. Colletta admitted that she lied when she claimed to an FBI agent in June 2018 that she didn't know Detective Luther Hall, the undercover officer, and that she hadn't come into contact with him on the night of September 17, 2017, when he was arrested as part of a violent kettling of protesters at Olive and 14th Street that also trapped journalists, med students, downtown residents and two members of the military, and has since resulted in fourteen federal lawsuits filed against the city.

Colletta further confessed that she had lied to a grand jury the day after she spoke to the FBI agent, making a series of false statements including when she claimed that Hall had been "brought to the ground very gently."

Hall, who is black and was assigned to cover the protests in an undercover role, has claimed that his fellow officers beat him "like Rodney King" the night of the kettling, slamming him to the ground and pummeling him with fists, boots and batons in what Hall described as a "free-for-all." The unprovoked beating resulted in a lip injury that required three layers of stitches, multiple herniated discs and a jaw injury that made it difficult for Hall to eat. Hall has been unable to work since the incident.

Colletta is set to be sentenced on December 13. She faces a minimum of 30 to 37 months in prison under federal guidelines, but prosecutors are seeking 46 to 57 months. Colletta has also surrendered her license to be a police officer.

Colletta was one of four officers charged in the beating and subsequent cover-up, alongside Dustin Boone, Randy Hays and Christopher Myers. All four were part of the force's Civil Disobedience Team assigned to the protests that night. Hays and Colletta were dating at the time of the beating, according to court documents. Lawyers for the other three officers told the Post-Dispatch last month that they do not intend to plead guilty.

But text messages sent between the officers in the days immediately before and after Hall's beating appear to show that each of them was excited to treat protesters violently. The indictment includes transcripts of those messages, including one wherein Myers writes "let's whoop some ass." That same day, Boone wrote that "[I]t's gonna be a lot of fun beating the hell out of these shitheads once the sun goes down and nobody can tell us apart!!!" 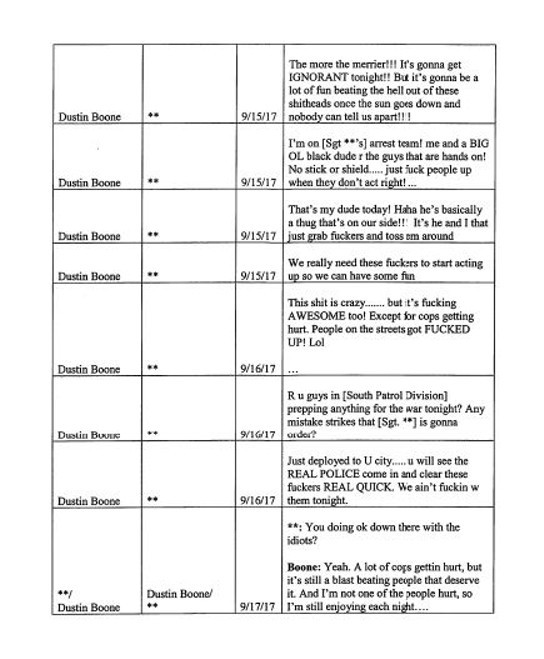 In another text, Hays writes to Boone that "going rogue does feel good" but cautions him to "make sure you have an old white dude as a witness" because there are cameras around.

Yet more text messages were released as part of an affidavit in January. In one, Boone reaches out to Hall and attempts to apologize. "I feel like an apology will never be enough but I would really like to speak to you in person so I can apologize face to face as a man and not through a text message," Boone wrote, adding, "I hope you are healing both physically and mentally. I can't imagine what you have gone through this past week."

But meanwhile, Boone and Hays were still in contact as well, expressing less remorse for the beating itself and more for the fact they'd been caught.

"I'd just like to apologize to the man before someone gets in his ear and tries to turn this into something more than it was," Hays wrote on September 22, 2017, five days after the beating.

Boone replied, "EXACTLY! That's my biggest fear now that it's getting around. Somebody puts money or race in his ear and he listens for some reason and it's over before we get to say a word."

Boone, Hays and Myers are due to appear in court next on December 2.