'Do Something!' Politicians, Faith Leaders Press Governor on Gun Violence 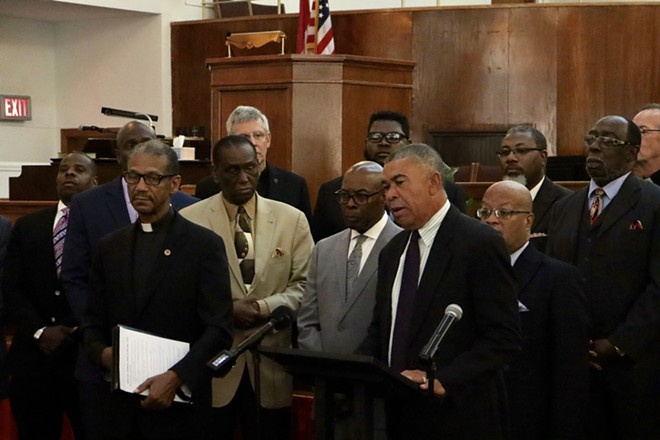 This summer, thirteen children have been shot and killed with a firearm in the city of St. Louis. On Friday morning, local leaders responded to cries for help with a cry of their own.

"Our message is clear," the Rev. Darryl Gray said. "We are asking Governor Parson to do something."

Gray was part of coalition of interfaith leaders and elected officials today that renewed calls for Parson to convene a special session on gun violence as St. Louis struggles with a string of child murders.

"We have allowed a culture of easy access to guns to devolve into an epidemic of gun violence," Clay said. "This is a public health emergency and that's how we need to approach it at all levels of government."

Echoing the Missouri Legislative Black Caucus, the group called for legislation allowing municipalities with high rates of gun violence to pass their own gun laws, independent of the state legislature. They also supported Mayor Lyda Krewson, who didn't attend, in her call to overturn a 2017 state law allowing nearly anyone to carry a gun free from restrictions. The group also wants $2 million in emergency state funding for Cure Violence programs, as well as an emergency meeting between the governor and community stakeholders before the state legislature's veto session begins on September 11.

On Aug. 21, Parson called for a special session to clarify a tax on auto sales, a decision Clay slammed. Parson has said the state legislature will consider gun reform when the next session begins in January.

The group, however, wants to see action now.

"If nineteen white children in the city of St. Louis had been killed, we would not have to beg this governor, or any other elected official, to act," Gray said.

Rep. Tommy Pierson Jr. (D-66), the Missouri House Assistant Minority Leader, began his speech by acknowledging the grief of the classmates, friends and family of those children killed. He asked the governor to trust the leadership of the St. Louis region to address their specific needs, decrying a "one-size-fits-all" approach.
"Our governor has a difficult job, no doubt, as the chief executive of this state," Pierson said. "There are times in leadership when you have to realize that a one-size-fits-all approach does not work. And certainly when it comes to our gun legislation for this state, a one-size-fits-all-approach is not working." 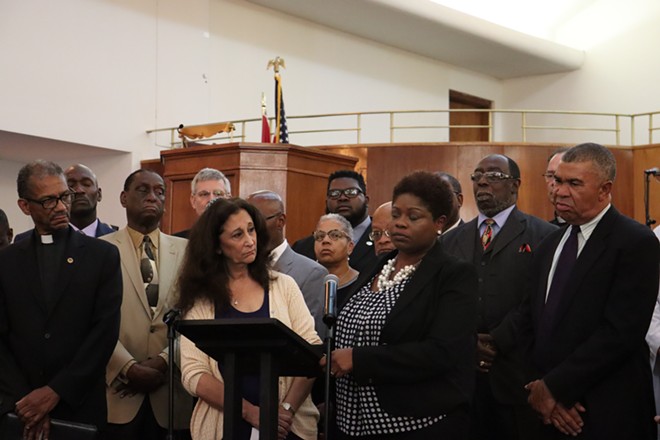 Earlier this week, city officials offered $100,000 in rewards for information leading to the arrest of those involved in the shooting deaths of four children, ages ten and younger. Edwards said that while the city has received many tips, they need more. "This is the most important public safety issue that confronts the City of St. Louis at this time," Edwards said. "There are many others, but we have to address the house that is on fire. The house that's on fire now is gun violence in the City of St. Louis."

Alderman Jeffrey Boyd (D-22nd Ward) said he is asking Treasurer Tishaura Jones to support him by setting aside $1 million from the parking commission to expand the Cure Violence initiative. Funded last week by the city, the $600,000 program is designed to calm tensions between gangs, identify high risk offenders and treat them. It has led to reported decreases in crime of 70 percent in other cities.

But Boyd told the Riverfront Times that the initial funding would only cover one-and-a-half neighborhoods. He says money from the parking meter fund could help them reach more neighborhoods, as well as provide additional incentive for people to come forward with tips.

The news conference, which began in prayer, closed with words from faith leaders. Rev. Dr. Dietra Wise Baker called for better education, saying that if we want the guns to be put down, we need to put something else in people's hands. Imam Djilali Kacem reminded Parson that, in his faith, whoever saves one soul, has saved the whole of mankind. Rabbi Susan Talve, who lost her own child to cancer, said that while her child was sick, children like Xavier Usanga, shot the day before school started, were healthy.