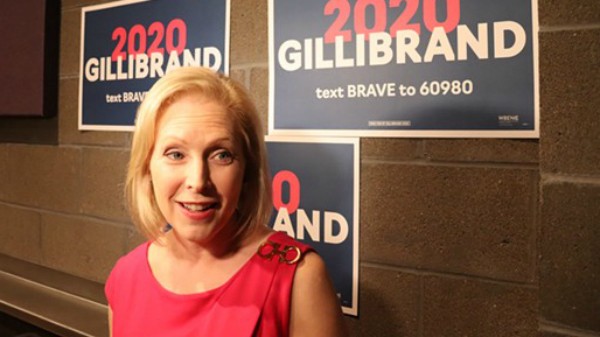 "I love being in Missouri, because you guys are fighters," the senator from upstate New York said, later adding it is important for her to go to the front lines of these battles.

Gillibrand said women's rights are under attack "like never before," blaming the president's rhetoric for renewed challenges. She said the next president needs to view women's reproductive freedom as a basic civil and human right.

She vowed to repeal the Hyde amendment, which prevents federal funds from paying for abortions, except in cases of rape and incest or to save a mother's life. She also committed to appointing judges and justices who will uphold Roe v. Wade.

"Just imagine how great it would be to have a working mom in the White House as opposed to a misogynist," she told the crowd.

Gillibrand noted the intersectionality of the issue of reproductive rights, saying it disproportionately affects women of color and transgender men. Describing herself as a white woman "of extraordinary privilege," she said it is her job to lift up the experiences and voices of black and brown women.

After Jones, a single mother, asked her how institutional racism relates to reproductive health and daily life, Gillibrand paused. She choked up, recalling meeting Jones' son, the same age as her son, Henry.

"He could have so many more challenges than Henry will have," she said, speaking directly to Jones. "Both of us are elected leaders, both are women of stature, who have a place and have a voice. But your son's life could well be harder, because the color of his skin. And my son's whiteness is what protects him."

"It's the fact that, if you didn't have a good delivery, and you were experiencing pain or something didn't feel right, that pain or that feeling could have been belittled, demeaned, dismissed," she said to Jones. "You could have bled out and died."

When Dr. Colleen McNicholas, chief medical officer for the Planned Parenthood in St. Louis, asked Gillibrand how she would expand abortion access, the senator said she would pass Medicare for All.

Her plan for passing her legislative agenda involves defeating Senate Majority Leader Mitch McConnell (R-Kentucky), gaining a Democratic majority in the Senate and changing the country's political climate through the bully pulpit. Only one senator has voted against Donald Trump's agenda more than Gillibrand. But Gillibrand, who previously represented a rural district in congress, said she knows when to reach across the aisle without compromising on core values.

While she would not commit to it, she told the Riverfront Times she would look at filibuster reform — lowering the threshold for delaying a vote. She said she would also consider other reforms to "make sure our democracy works again."

"Unfortunately, money in politics is all too prevalent, and so I will actually pass a publicly funded election bill to restore our democracy back to the hands of the people, away from the money and special interests that control everything in Washington," she told the RFT.

Gillibrand, a Christian, said that while many oppose abortion on religious grounds, she believes in free will and the separation of church and state. 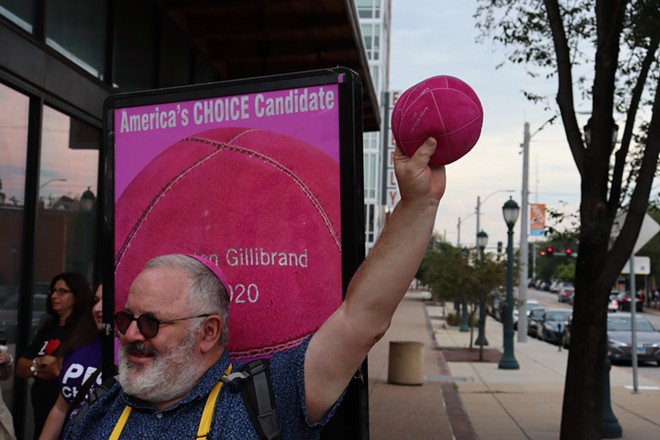 Marc Daniels, a Jewish man who brough pink yarmulkes emblazoned with "Kirsten Gillibrand 2020," agreed. He said abortion restrictions infringe upon the reproductive rights of Jewish women. According to a 2017 Pew survey, 83 percent of American Jews believe abortion should be legal in all or most cases. A member of that camp, he says that, according to the Talmud and the Torah, life begins upon birth.

"Kirsten's message is interesting, from a positioning point," he says. "I call her America's 'choice' candidate because she's the person who ensures that this freedom of women's reproductive rights — and probably freedom for male reproductive rights as well — gets spoken about, and that's what I like about her."

She added that the Board of Aldermen needed to revisit the issue of buffer zones.

"Right now we have protestors that are often out in front of Planned Parenthood every time that it's open," she said. "While we all appreciate First Amendment rights, when you block a driveway and you impede access to healthcare, that is a problem. And a buffer zone would find that balance of allowing those First Amendment rights while also ensuring that patients can access the care that they need free from intimidation."

Antoine Givens is still deciding whether or not to support senators Gillibrand, Warren or Cory Booker (D-New Jersey). He says that he likes Gillibrand's advocacy for family rights in addition to women's rights.

"She released one of her policy ideas for national paid family leave, which I don't think any other candidate has really been pushing it as much as she has," Givens said.

Gillibrand, who has yet to qualify for the third round of primary debates in September, ended her event asking for $1 donations. She needs three more qualifying polls of two percent support and 130,000 total individual donors to make the debate stage.

"We're honored you thought enough of Missouri, which is often overlooked by presidential campaigns," Jones told Gillibrand toward the end of the event. "You thought enough about us to come and recognize our struggle and our fight for women's healthcare and our access to abortion."