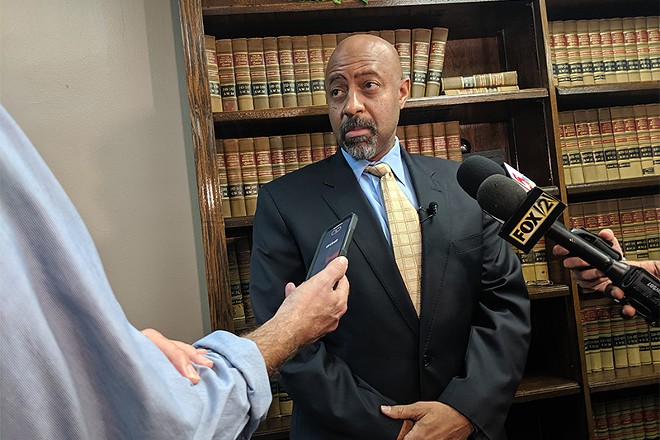 At the center of multiple legal maelstroms, St. Louis Circuit Attorney Kim Gardner is fighting battles against bad cops and bad convictions — but at the same time, the storm in her own house continues to build.

On Monday, lawyers representing Gardner appeared before St. Louis Circuit Judge Rex Burlison, arguing that a public hearing is needed to evaluate possible conflicts of interest in a case where Gardner, the city's top prosecutor, appears as a victim of a rarely charged crime, "tampering with a judicial officer."

That case is progressing more than a year after Gardner first filed a report with the St. Louis metro police, alleging that in 2018 lawyers representing then-Missouri Governor Eric Greitens told her that her career would be "ruined personally [and] professionally" if she did not drop the criminal charge filed against Greitens for invasion of privacy.

Since Gardner can't prosecute a case in which she is the victim, Burlison appointed retired Boone County judge Michael Bradley as a special prosecutor. But Gardner's Washington D.C.-based attorney, Roy Austin, contends that Bradley's years working inside the Missouri Attorney General's Office connects him to former governor Jay Nixon, who now works for the law firm Dowd Bennett — the very same firm whose attorneys, according to Gardner, threatened her in 2018.

"The public has a right to know that when the elected circuit attorney is not running a case, the person who is put there has no conflicts of interest," Austin said in an interview after the hearing on Monday. "We will simply wait to hear the ruling from the court."

Carmody has already charged William Tisaby, a former FBI agent Gardner hired to help build a case against Greitens, with evidence tampering and six counts of perjury. An indictment unsealed in June described Gardner as an active participant in Tisaby's alleged perjury, though she herself has not been charged.

Carmody is still digging into the case, and last week he confirmed that the probe is active, setting up the possibility for a new grand jury to evaluate whether additional charges are needed on a case that, month after month, seems to get more tangled and expensive.

To Austin, however, the fact that Carmody attended high school with Edward Dowd, one of the lead attorneys who defended Greitens, should raise concerns.

"Jerry Cardmody has such an absurd number of conflicts," Austin said. "He has been very close friends with the lead attorney for Governor Greitens, and he is the one who is investigating whether or not there is any impropriety with respect to the prosecution of Governor Greitens. That is as clear a conflict as one can find."

Ultimately, Gardner's political fate may hang in the balance of these two investigations and their respective special prosecutors. Both investigations are expected to wrap-up in a matter months, and perhaps sooner.

In July, after a judge lifted a gag order that had prevented Gardner from commenting on the investigation into her office's conduct during the Greitens investigation, the city's top prosecutor was defiant: She stated that she "did nothing wrong" and called on everyone to move on from the saga that toppled Greitens political career.

Whether it topples hers is a matter that remains to be seen.

"Now we have to stop spending our time and limited resources looking at one case as if it is the only measure of competence and success," Gardner said in July. "The true measure lies in how we handle the 10,000 criminal cases that are referred to our office annually."


Editor's note: A previous version of the story incorrectly described William Tisaby's charges as federal. He was prosecuted by a special prosecutor in St. Louis. The story has been corrected. We regret the error,