When a Fake Business Used a Real St. Louis Address, Things Got Weird 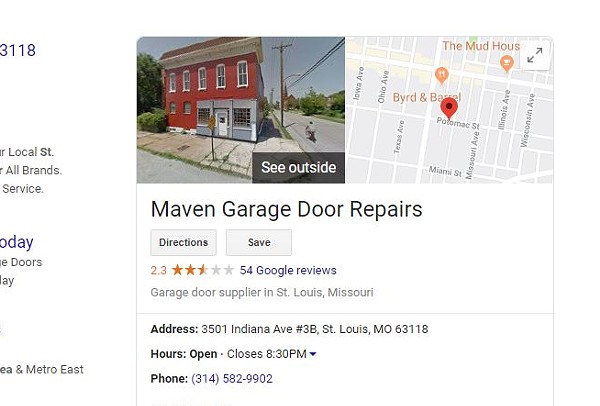 They started showing up at Missi Ryan's door in June, asking about a garage door repair company. There was an older woman who said she'd paid $39.99 for a service call that never showed, and a man who had paid the $200 quoted to him by a repairman. One person had left a note that read, in part, "You ripped me off."

But Ryan, who owns the tidy brick building at 3501 Indiana in the Marine Villa neighborhood, doesn't run a garage door repair business. However, until very recently, Google made it appear that way — Google searches showed that 3501 Indiana 3B was connected to a company called Maven Garage Door Repairs, which was backed by numerous five-star ratings and glowing reviews.

Today, likely thanks to the company being outed in a KMOV report that aired Tuesday night, the fake Google listing is gone. But the curious case of how scam "business" was able to take over a random person's life wasn't just an issue with Google.

For one thing, Ryan says the police seemed completely uninterested. In an interview earlier this week, she said that she tried to file a police report about the ongoing fraud, but claims that she's never been able to speak with a detective, even after she waited for hours at her local precinct.

"It's comical," she says of the scammers. "They list their address as 3B. It's a two-story building. There's no third story, there's definitely no 3B."

Ryan suspects that the people behind Maven simply registered her address through Google's service that allows (presumably legitimate) companies to register their contact information. Google then mails a postcard with a unique code to the address.

She says, "We know to register on Google that's the process, so they had to physically take this verification out of our mailbox."

That lack of police interest left Ryan with limited options. She contacted the United States Postal Inspection Service, and received a response last week that said her complaint had been forwarded to the Inspection Service's office in Chicago. She also marshaled her friends and families to review-bomb Maven's Google listing, hoping to warn other unsuspecting customers.

But even though she says her efforts led to dozens of "spam" reports lodged against the listing, it remained fixed in Google's search results.

"We've had over 50 friends mark the listing on ‘suggest an edit’ as a scam," she says. "There’s been no movement, and there is not a clear way to do that without a representative of Google contacting us. We’re beating our heads against the wall trying to get anybody to address the issue."

And that was a problem for Ryan, since customers were showing up at her house to complain, and she says it wasn't easy convincing them that she wasn't, in fact, the scammer who'd taken their money.

From those customers, Ryan learned that people were finding the number through a Google search, and subsequently paying $39.99 over the phone for a "service call" that never materialized. In one case, though, a customer told Ryan that Maven actually dispatched a worker to view a project, leading to a "bid" of $200, which the customer paid. The worker never came back.

"I think they felt compelled to go to the physical address, thinking maybe they thought 'Oh, they got my wrong address,' innocently thinking that they're going to clear up the issue," Ryan says now, "Until I informed them, they're not here, they never have been."

On Tuesday, Riverfront Times called the number listed for Maven, and we discussed a fictional garage repair job with a person identifying himself as "Charlie," who told us Maven could send out worker out for a $39.99 service fee, which could be paid in cash or over the phone by credit card.

That same day, KMOV reporter Alexis Zotos also called up Maven, identified herself as a reporter, and (after getting hung up on a couple times) got someone on the phone — "Phil" — who would talk about the business' listed address.

Phil denied scamming customers, and Zotos reported that he "changed his story several times" and said he would not change the address.

On the phone with Zotos, Phil sounds like a guy who is full of shit and knows it. In KMOV's story, which features the call itself, Phil kicks off his explanation by remarking, bizarrely, "Channel 4, baby, that's what's going on, it's called a typo, and it’s also one thing you might want to tell your viewers or listeners, don't trust the internet."

By Wednesday, the Google listing was down, but Ryan tells RFT that she's seen the company's listing disappear before when her friends started their campaign of negative reviews. She's worried the company will simply wait a few days, reactivate their Google listing, and start their scam again.

Yesterday, RFT called the number for the now-deleted business listing. After a few rings, it went through.

"Garage door repairs," a voice said, "this is Dale speaking."