by Doyle Murphy and James Pollard 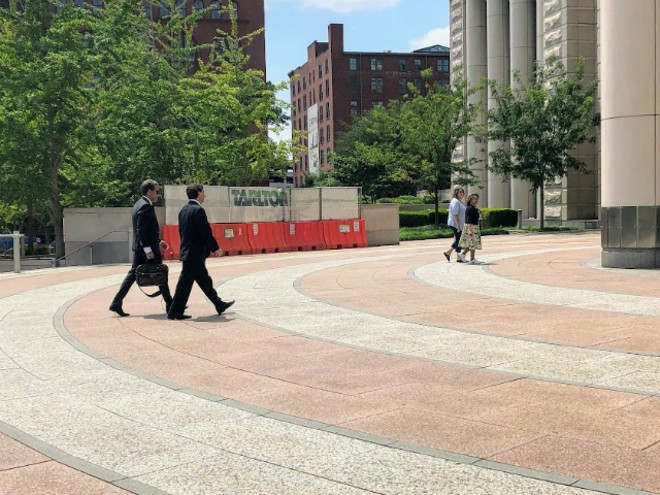 Stenger pleaded guilty on May 3 to three felonies in a pay-to-play scheme that rewarded political donors with taxpayer-funded contracts and land deals.

The 47-year-old had been the target of a long-running criminal investigation that included clandestine recordings of the disgraced politico sounding like a wanna-be mob boss as he railed against political enemies and bragged profanely about his naked corruption.

"How about that motherfuckers?" he was recorded saying after winning re-election in November 2018. "I don't show up to the council meetings. I don't do fucking shit. I've been sitting at my house for the past two months fucking raising money and then won by twenty percent."

In court today, he cut a more somber figure, reading a letter of regret for his crimes.

"I heartfully apologize, and I'm deeply sorry for the harm I've caused," he said.

His schemes included steering multiple illicit deals to former night club owner and insurance company owner John "Johnny Roller" Rallo, including a bogus consulting contract through the Port Authority that paid $130,000 for six months of nothing. Rallo pleaded guilty on July 16 to three counts of honest services mail fraud/bribery — the same charges as Stenger. He's due to be sentenced in October.

Members of Stenger's inner circle have also been caught up in the investigation. His former chief of staff, Bill Miller, pleaded guilty to fraud charges on May 31, and Sheila Sweeney pleaded guilty to misprision of a felony — admitting she knew about the crimes and covered them up — on May 10. She formerly ran the Port Authority.

Stenger is the first of the political crime ring to be sentenced.
Once the most powerful elected official in the state's largest political county, his fall has been swift. He was indicted and resigned on the same day in late April and pleaded guilty five days later, silently entering and exiting the Thomas F. Eagleton Courthouse in downtown St. Louis alongside his high-powered attorney, Scott Rosenblum.

That's the way he arrived today, dressed in a dark suit as he Rosenblum climbed the courthouse steps to face judgement in front of U.S. District Judge Catherine Perry.

Since the charges were announced, Stenger has tried to conduct himself as a contrite, former public servant, conveying through his attorney his great remorse as he pleaded for a sentence on the low end of the 37 to 46 months recommended by federal guidelines.

In response, assistant U.S. Attorneys Reginald Harris and Hal Goldsmith have dished out a few of Stenger's choice comments from a trove of secret recordings and seized text messages that reveal him as defiantly crooked.

Among his schemes, he hired people solely for their political influence and then boasted about his ability to hide the do-nothing jobs in a haze of government dysfunction.

"That's one of the greatest powers I have," he was recorded saying. "That I have 52 people who I hire and nobody knows where they're coming from. For instance, there are two slots over at the jail. Nobody knows if Julia Childrey [Director of Department of Justice Services] put those people there or I did. It's good fucked up. We like it fucked up. I care about my politics."

At today’s sentencing, Goldsmith described a Stenger speech from 2013 in which the politician painted his predecessor as corrupt and decried the deterioration of the public’s trust. In the end, the prosecutor said, it was Stenger who attacked that trust.

“Through his illegal pay to play scheme aimed at filling his own political coffers, the former County Executive shattered that trust,” Goldsmith added in a statement. “The residents of St. Louis County and St. Louis County government employees have suffered immeasurable harm as a result.”

Rosenblum described Stenger as a remorseful public servant, who faltered under the pressure of a political campaign system that requires an endless supply of fundraising and donors. The case shows the need to re-evaluate that system, Rosenblum said, adding that his client “has suffered in a way that is particularly unique to high profile clients.”

"Steve Stenger abused his power as an elected official to benefit himself," Special Agent in Charge Richard Quinn of the FBI St. Louis Division said in a statement. "Had the FBI and U.S. Attorney’s Office not stopped Stenger from misusing taxpayer dollars for his personal gain, he would have continued to run St. Louis County into the ground. He will now have years in federal prison to reflect on the cost of his greed.”

Judge Perry chastised Stenger for his crimes, calling it a “sad day” for his former constituents, whom he victimized through his years of corruption.

“This was your whole way of life, as best I can tell, from the whole time you were in office,” Perry said.

The judge granted Stenger’s request to surrender on September 21, taking into account that his wife is pregnant and due to deliver on September 13. His punishment will include a $250,000 fine, three years supervised release and $130,000 in restitution, which he has already repaid to the Port Authority.

Rosenblum said he believes client will emerge from prison a better man.

“I have no doubt that he’ll take this period of incarceration to better himself,” Rosenblum told reporters after the hearing. “I have no doubt he will continue to be successful in his next endeavor.”

Editor's note: This story has been updated with additional details.