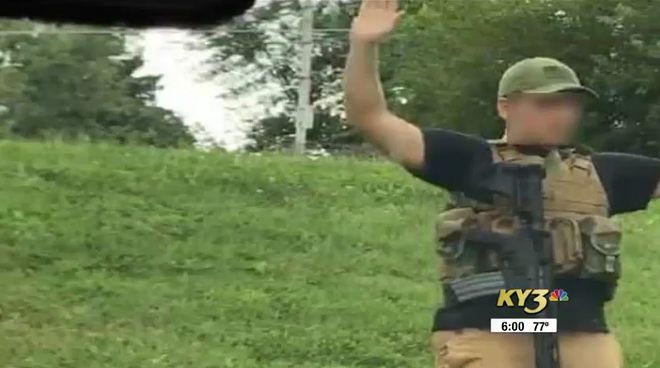 A man is in custody tonight after being arrested at a Springfield-area Walmart, where he was found clad in body armor, carrying "tactical weapons" and packing 100 rounds of ammunition.

KY3 in Springfield reports that the Springfield Police Deprtment responded to an active shooter call at the Walmart at Republic Road on Thursday evening. According to authorities, the suspect, a young white male in his twenties, showed up at the superstore dressed in body armor and military fatigues, and carrying a rifle and handgun as well as more than 100 rounds of ammunition.

He reportedly grabbed a shopping cart upon his arrival, and began filming himself while walking through the store. That's when a store manager spotted the man and pulled a fire alarm, urging people to evacuate immediately.

The suspect slipped out an emergency exit, according to the news station, where an off-duty firefighter spotted him and held him at gunpoint until the police arrived.

Police reportedly arrived on the scene within three minutes of receiving the call.

Lieutenant Mike Lucas, an officer with the Springfield Police Department, tells KY3 that though the man's motives and intentions are unclear at this time, he believes that the suspect's intent was to cause chaos. "His intent was not to cause peace or comfort," Lucas told the station. "He's lucky he's alive still, to be honest."

The incident comes just days after a mass shooting at a Walmart in El Paso left 22 people dead and 25 injured, in one of the largest mass shootings in the nation's history. That incident was followed the next day with yet another shooting in Dayton that killed ten and wounded 27.