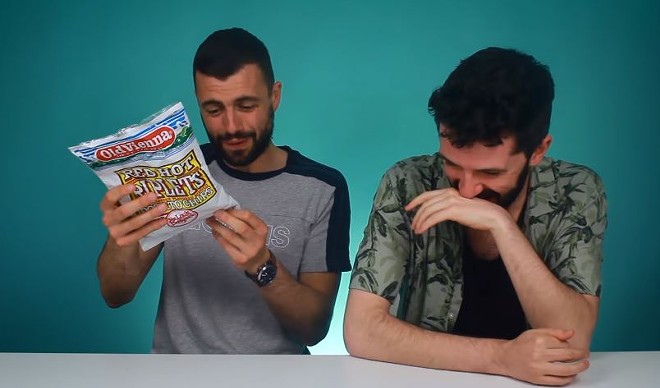 Somewhere out east, there's a interesting little island named Ireland, and recently a few lucky denizens got to experience something that even the land of Guinness and Joyce doesn't have: Red Hot Riplets.

And you know what? The Irish really liked our junk food! Although they insisted on calling them "crisps" and not one of the hosts dumped the dregs of the bag onto the face of a sandwich. Amateurs!

See Also: Fantastic St. Louis Junk Foods ... and When to Eat Them

In their defense, one of the hosts disclosed mid-snacking that he had embarked on this experiment whilst "deathly hungover," so we can't be too hard on him, since that is oh so very St. Louis.

It's worth noting that the professedly hungover host, Sean MacGabhann, wound up having a ... bit of time with the hotness of St. Louis's reddest and hottest "crisp." In the video, he falls prey to a coughing fit, and then, inevitably, tears.

NEW VIDEO - off we go to Missouri! (Figuratively, not literally...maybe one day though 😎)


In the end, the Irish hosts ranked the original "Red Hot" style above the other Old Vienna snacks, with the remaining three ranked at second place for Southern Style BBQ chips, third for Hot Corn and fourth for Crunchy Nuggets, whose flavor is described as retaining a "tang of feet."

Interestingly, this isn't the first time the Irish-centric YouTube channel, The TRY Channel, has featured our particular neck of the Midwest. In May, the channel released "Irish People Try Missouri Craft Beers," which featured A) a consensus around Abbey Ale and B) some delightful new ways to pronounce "Missouri."