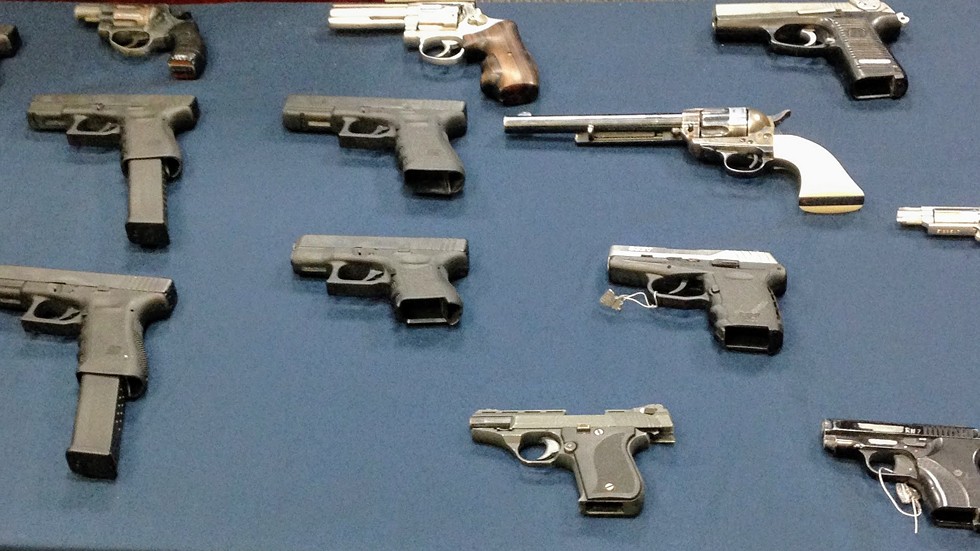 El Paso, Texas, is 1,215 miles from St. Louis. But last weekend’s white domestic terrorism — compounded shortly thereafter by more atrocities in Dayton, Ohio — hit home as much as this year’s 115 homicides through Monday in the city, which are five more than at this time last year.

We’re so numb to gun violence in our own community that the carnage at a Walmart and at a nightlife district undoubtedly produced more empathy here, at least among those of us fortunate not to live in war zones. Whether that’s a function of their shock factor and scope, or for factors sociological, or both, the two attacks may have jarred open conversations about hate and guns that have far too long been frozen.

Gun worshippers’ trope notwithstanding, this is precisely the time to talk about guns — and in the particular case of El Paso — the unprecedented stoking of fear and loathing by the hateful rhetoric of President Donald Trump. If you cannot connect the dots between Trump’s verbal and policy assaults on people of color in general — and immigrants in particular — you need a new set of crayons.

And, yes, speaking of tropes, this is precisely the time to talk about the politics of the crisis. If that means politicization of a horrific tragedy, so be it, because there is no other time: The torrent of such tragedies — 251 mass shootings in 216 days this year — leaves no moment of respite for which to schedule a meeting on the topic.

Of course, our primary reaction is to weep and grieve and suffer for the innocents. That, coupled with our shared admiration and gratitude and awe for the first responders and law enforcement officials at ground zero of these tragedies, is all that our polarized culture can agree upon.

But to discuss this now — as in right now — is not to exploit the situation. It is to honor to victims’ suffering and memory. And to do something.

When the racist Trump stated, with no sense of irony, that “hate has no place in our nation,” it was about as close as any Republican came to calling him out in the wake of the tragedy. That speaks for itself. Trump’s strategy of exploiting fear and division won’t subside.

So might this be the weekend that ends a quarter century of inaction on gun control?

Don’t expect much. Little or nothing happened after the Aurora Theater or Sandy Hook School or San Bernardino or the Orlando nightclub or the Las Vegas Strip or Marjory Stoneman Douglas High or Santa Fe High or the Tree of Life Synagogue or Virginia Beach or the Gilroy Garlic Festival or any of the other unspeakable tragedies we recall in shorthand. What’s needed is a mild outbreak of common sense. We the people merely have to break the spiral of illogic and irrationality that has characterized this issue since the 1960s.

To paraphrase one former president, “It’s the guns, stupid.”

America has too many guns. Far too many guns. We don’t know the real number for certain, because we don’t dare register firearms as we would if they were, say, as lethal as automobiles. But the best estimates put the current number at 395,000,000 or so — approximately twenty percent more guns than people — growing daily.

Those familiar statistics belie one less noticed, that the percentage of American homes possessing guns has actually decreased over the years. Presently, according to Gallup-poll numbers and others, only 43 percent of U.S. homes have guns, a decrease from the 50 percent-plus totals as recently as 1994. It turns out that three percent of the population owns 50 percent of the firearms. Wow. It doesn’t require deep academic analysis to understand what follows. The United States has an exponentially higher firearms-related death rate than any other similar Western-style democracy. A handful of Latin American nations have higher rates. Japan, which has no guns and shockingly, no gun-related deaths.

We’re not matching Japan nor should we try as the Second Amendment right to bear arms isn't going anywhere. We can envy what they did in New Zealand after their one-and-only horrific massacre: Within six days, and with virtual unanimity among rival political parties, they outlawed — and starting buying back — just about every firearm more lethal than a shotgun. That won’t happen here. But we can get rational about the Second Amendment, National Rifle Association lies notwithstanding. Rational gun control no more threatens the Second Amendment than outlawing the “right” to threaten someone’s life threatens the First Amendment. Needing a parade permit doesn’t mean you’ve lost the right to assembly. Not being allowed to perform ritual sacrifice doesn’t deprive a church of its religious freedom.

America merely needs common sense. It could emulate a gun-friendly nation like Canada, where the gun ownership of 34.7 per 100 people is less than a third of the U.S. total but roughly the same as American gun ownership totals all the way back to 1946, when 141.4 million citizens owned an estimated 48 million. The nation doesn’t need radical change: It needs to return to norms that stood in place in most of our lifetimes.

As to the political realities, national support is overwhelming for universal background checks for all gun purchases. The Democrats, some of whom presently seem braver about taking away people’s health insurance than their assault weapons, might consider the case of battleground state Michigan — one that matters deeply in 2020 — where polls as recently as 2017 showed 88 percent support for background checks. If they can’t run on that, they can’t run.

Background checks should be the low-hanging fruit. So should banning gun ownership for perpetrators of domestic violence, or for people convicted — as youths or adults — of acts of violence. Then there’s the matter of assault weapons, which should be rebranded for what they are: military-style arsenals.

The principle here is very simple: Civilians have no need nor right to possess military weapons. Period. The Second Amendment doesn’t provide an absolute right to possess an assault rifle any more than it assures the right to possess grenades or handheld nuclear weapons, both of which would be effective in personal self-defense.

And let’s not get sucked into the vortex of semantic arguments defining assault rifles. Here’s a simple principle: However one arrives at the definition, if a weapon possesses the ability to kill large numbers of people in an instant, civilians don’t get to own them. That leaves plenty of weaponry available to Americans to hunt, to protect their homes, their cars and their persons, all legitimate uses. Lastly, can we please dispense with the moronic argument that such and such law would not have prevented such and such tragedy, nor that it would magically prevent others like it. Of course not. Laws against murder and rape don’t mean that rapes and murders won’t occur. Laws against white-collar crime don’t keep $400 billion from being stolen every year. Laws against speeding don’t mean people don’t speed.

But by attempting to reduce — and eventually eliminate — the scourge of military weaponry in civilian hands, we can better protect our outgunned law enforcement officials and we can reduce the odds, and thus the numbers, of firearm-related violence in our nation. We need to do that, and we need to that now. Because what happened last weekend in El Paso and Dayton — and what’s happening every other day in cities like St. Louis — isn’t merely close to home.

Ray Hartmann founded the Riverfront Times in 1977. Contact him at rhartmann@sbcglobal.net or catch him on St. Louis In the Know With Ray Hartmann and Jay Kanzler from 9 to 11 p.m. Monday thru Friday on KTRS (550 AM).