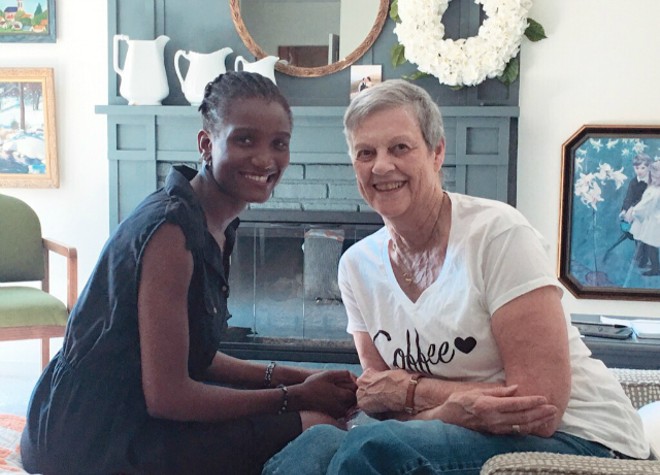 Pat Price, 76, likes to drink chardonnay on her backyard "patio garden" in the evening. Sitting in her lawn chair, she watches hummingbirds buzz around her birdfeeder. Having lived in her Kirkwood house for 27 years, she's noticed one thing about those birds.

"They're so territorial," she says. "For God's sake, there's enough to share."

It's an ethos she has adopted in her own life. For almost two months, she has been sharing her home with 31-year-old Annie Mbale. The two got connected through Odd Couples Housing, a St. Louis startup that pairs aging homeowners with younger adults.

Bumble, but for housing

"It's kind of like Bumble," says Mbale, who also works for Odd Couples Housing. "You sign up, you match with potentials."

John Levis, co-founder and chairman of Odd Couples Housing, says the company splits people into two categories: homeowners and seekers. After signing up online, both groups fill out a lengthy questionnaire to test compatibility. Once an algorithm has paired two people, the couple then meets. If they like each other, the company will suggest a price for the seeker, which the two can then negotiate themselves.

Price says her process was quick. It took six weeks from the time she joined the housing initiative to find Mbale and get settled. During that period, she'd previously met with and decided against two other potential matches. But her and Mbale hit it off.

"Third time's a charm, baby," she said to Mbale.

Mbale says she remembers Price telling her, "I drink a glass of wine at night."

Levis says that each deal is different. The utilities in the house and the seeker's duties determine the amount contributed to the homeowner.

"What we're doing is really not predicated on rent so much as it is expense sharing — expense sharing that could be mitigated by certain tasks that the seeker performs," Levis says. "We've got everybody doing things like dog walking to computer training to grocery shopping."

With both rent prices and the elderly population growing in Missouri, Levis describes a win-win situation: Older people get to age at home, younger people don't have to pay as much for nicer housing, and both get companionship. Currently undergoing beta testing with eight couples, the company has found it is especially popular with young professionals and graduate students, and even more so with international students.

Mbale, who went to UMSL for her undergraduate and master's degrees, says she would suggest it to anyone. But with tuition being especially expensive for international students, she says it will appeal to them. It will also give them an experience of American life they couldn't get on a college campus, she adds.

Odd Couples board member Brian Carpenter, a professor in Washington University's Department of Psychological and Brain Sciences, says that as our society grows, older people are no longer satisfied with moving into a nursing home or living at home alone.

He adds that there are are practical benefits for both older and younger people living together.

"We tend to live in a society that's pretty uniform in terms of the age groups that we spend time with and hang around with," he says. "This is one initiative that will bring together people from different generations, each of whom have different kinds of experiences and skills to share."

He notes that social isolation is an especially challenging problem for older adults. And research shows the damaging physical and psychological health effects of social isolation.

A 2015 study by Louise C. Hawkley and John P. Capitanio linked social isolation with depression, poor sleep quality and poor cardiovascular function, among other things. Hawkley found that among older adults, loneliness is more likely to occur when one has functional limitations.

"To the extent that a program like Odd Couples allows people to be less socially isolated, we are confident that that brings along some psychological and physical health benefits," Carpenter says.

Living with an older person is nothing new for Mbale, who grew up with her grandmother in the southeast African country of Malawi. In fact, she says living in the United States was strange, coming from a country where you live as an extended family.

She says she joined for multiple reasons. She wanted to know the product that she was selling, and it made sense financially.

Having obtained a student visa while finishing her bachelor's and getting her MBA at UMSL, she now has a new visa that allows a student to gain employment experience in their field of study for one year. As a result, she also didn't want to lock into a long-term living situation.

"Your visa changes like crazy," Mbale says. "And you never know what's going to happen in a year. So I didn't want to move in a fancy apartment and spend all my money."

Price's daughter read about Odd Couples Housing in the Ladue News and suggested it to her mother. To Price, it seemed like an excellent idea.

"I have young adult grandchildren that I adore," Price says. "I love this age. So it's been a perfect fit."

With both maintaining fairly busy social lives — and Mbale working — they describe their relationship as being like roommates. Mbale waters plants, takes out the trash, sweeps the kitchen and loads/unloads the dishwasher.

"Annie is a delight," Price says. "She's been very helpful. She does things that are hard for me to do. It's been lovely."

The two sometimes make meals together. Price introduced shepherd's pie to Mbale. And Mbale introduced Price to Malawi cuisine, making a dish similar to scrambled eggs, but with tomatoes, rice, soup and spices.

"She makes me feel like a good cook," Mbale says.

And while it is weird for her to say now, Mbale says it feels like home.

"When I moved in I thought I was just renting a room," Mbale says. "She (Price) was like, 'Annie this is your home. Do whatever you want.'"