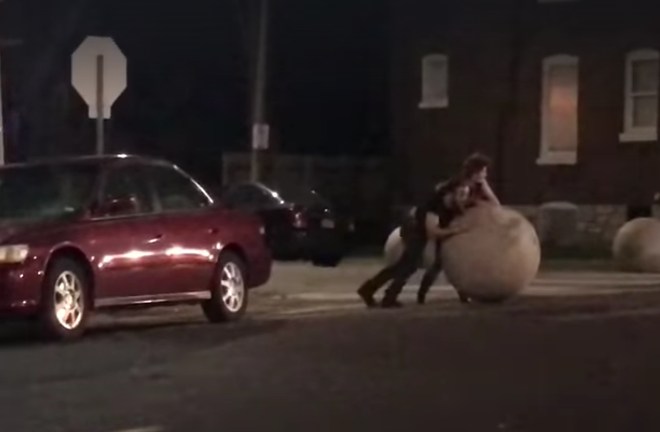 St. Louis' balls are not safe.

That much is evident upon just one viewing of a video recently shot in the Grove, in which two men can be seen callously removing one of them for their own perverted amusement.

In the video, which has since gone viral, two men can be seen carefully cradling one of St. Louis' famously gigantic balls in their hands as they gently rock it back and forth, not too fast, not too slow. Were that the end of it, there would be no cause for alarm — perhaps even a kind "thank you" would be in order.

But then things get more alarming. As their efforts increase in intensity, soon the pair has wrested the enormous orb from its perch, removing it fully as onlookers watch aghast.

"Oh my god," shouts one woman as the massive ball is dislodged and begins rolling. "That's gonna fuck up your car!"

The duo gain control of the girthy sphere before it smashes into anything, which is good, because St. Louis' balls can really fuck some shit up once they get a little momentum going. The video ends with the ball fondlers rolling the orb behind a vehicle and out of sight.

According to KMOV, St. Louis' prodigiously massive traffic-calming balls weigh some 1,800 pounds apiece. The one from the video dropped into place some fourteen years ago and was most likely recently hit by a car, which caused it to become dislodged, the city tells the station. They add that residents should report any missing or misplaced balls and city officials will come out and pick them up.

"Just a typical night in the Lou," writes the man who shot the video. "At least they're not shooting I guess."

Watch some men play with St. Louis' balls for yourself below, if you're into that kinda thing: