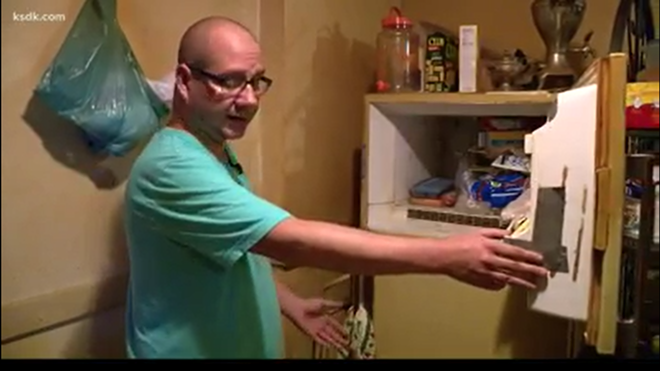 A south St. Louis man says his mother died with a dark secret — she had been keeping a dead baby in her freezer for decades.

Adam Smith, 37, tells reporters he made the gruesome discovery while cleaning out their shared apartment following her death last week from lung cancer. He assumes the baby was his older sister.

"It still had skin, hair and everything," Smith tells KSDK. "It was mummified."

His mother, 68-year-old Barbara Smith, had been secretive about many parts of her life, he says. One off-limits topic had always been the box she had kept in her freezer for decades.

"This box has been in every freezer, in every home that we lived in for my entire life," Smith tells KMOV.

He remembers being told, at some point, that it was the topper of a wedding cake, but his mother always refused to directly answer questions about the box. Smith says he moved in with her to take care of her as she struggled with cancer. After her death on July 21, he began sorting through her belongings and clearing out the Clifton Heights apartment. That's when he decided to finally find out what was in that box.

It was such a momentous occasion, he tells the St. Louis Post-Dispatch, he took a photograph of the box and told his girlfriend he was going to look inside for the first time. He says he felt a leg first, and when he started to pull open the package more, he realized he was looking at the long-frozen body of a dead infant.

Smith called St. Louis police shortly before 1 a.m. on Saturday. A spokeswoman for the department says they sent investigators from the child abuse and homicide units. They're treating the case as a "suspicious death," pending an autopsy.

Smith says he is still trying to process the shocking discovery and wonders if he'll ever know the full story of what happened to that baby and why his mother kept the secret for so long.

"Who does this?" he asks in an interview with KMOV. "Who absolutely keeps their own child in a box for this long and never talks about it?"