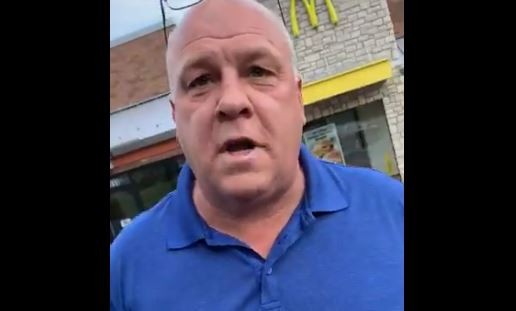 A bizarre confrontation over whether a teen dented the car belonging to a Florissant city councilman became a viral video over the weekend, racking up 4.5 million views on Twitter and, more remarkably, possibly setting a record for the amount of times a single human being can own himself.

The video, which runs less than two minutes, opens with Timothy Jones identifying himself by name and position on the city council of Florissant. The camera swings around, briefly capturing the amused face of the unidentified seventeen-year-old doing the filming.

Evidently, Jones had already threatened to call the cops, and now the video showed him throwing around his clout as a local politician. He accuses the teen of denting the front passenger door of Jones' vehicle. So Jones confronted the teen, who in the video appears to be suppressing laughter (badly) throughout the entire exchange.

But no police are called. When the teen's sister posted the video on Thursday last week, she praised her sibling for capably responding to harassment and "respectfully" making a fool out of a local politician.

I taught my brother well... 17 years old and respectfully made a fool out of this St. Louis Councilman who tried to harass him today... You really hate to see it... 😂😂😂 pic.twitter.com/4kqRrh3Z8n


It's worth noting that, as far as parking lot arguments go, this one was remarkably civil. The only profanity comes from Jones, though none of it is directed at the teen. And name calling was restricted to Jones' insistent use of the word "dude" while he steadily (and badly) tried to argue that the teen had dented his car.

Over the short video, Jones digs himself deeper and deeper into the hole of his own stubbornness. The pinnacle of this descent comes at the 1:15-mark: Pointing to the spot where Jones has identified as the dent, the teen conducts a demonstration.

"Wait," the teen says, "You see where I'm parked, right?" Then he opens his car's door, which extends.... to a completely different part of Jones' car. It's nowhere close to the alleged "dent" Jones was just gesturing to.

"It doesn't even hit over there!" the teen says, pointing out the obvious. Jones bends to get a closer look. He runs a hand on the surface of his passenger-side door. It's like he can't believe his own eyes.

The teen again points out that there's no way for his car to have made the dent Jones himself pointed out on his own car.

"But anyway," the teen adds, "let's call the police like you said."

This could have been the opportunity for Jones to acknowledge that he made a mistake and apologize. And for a second, it sounds like that's what the councilman is actually doing.

"You're right, you're right, I agree, dude," Jones finally says. He then tells the teen to shut the door so he can get a better look at the surface, which he rubs down vigorously with a palm.

But Jones is not done, on the contrary, he scolds the teen: "Dude, that was uncalled for, you could have said something." As the teen laughs and protests, Jones tries to change the subject to how the teen's parents raised him (really) and then, pushing his bold counterattack further, Jones changes the subject to how the teen apparently knocked his phone out of his hand.

The teen, wielding a vast supply of patience, simply opens the door to his car, showing again that his door couldn't have marked Jones' vehicle: "Please tell me," the teen repeats, "what dent did I put right here?"

As a finale, the teen suggests calling the police, to which Jones confidently responds, "Yeah, call 'em up dude." When the teen laughs and remarks that it was Jones who said he would call the police, Jones backtracks further.

"Dude," says the adult politician bullying a teenager over a fantasy dent in a parking lot, "just have a little common courtesy, it's all I'm asking for, dude."

Thankfully, the police never get to waste their time on the incident, as the teen exercised not just uncommon courtesy, but common sense. On the video he gets back into his car, remarking to Jones, "Hey man, just go on with your day, I'm not even worried about it."

In response, Twitter users heaped additional praise on the teen and contrasted his behavior with the much older public official.


Others pointed out that Jones appeared incapable of admitting he'd made a mistake.

It went from “my car is messed up and I need the police!!” to “let me manipulate you into thinking you did this” to “well I just want an apology” to “I’ve clearly made a mistake and am incapable of apologizing because I’m a jerk who is now embarrassed.” Lol so much happening here


As the for the teen, he seems to be doing just fine. In a later tweet, his sister wrote, "My bro doesn't have twitter he says thanks for all the positive responses."

My bro doesn’t have twitter but he says thanks for all the positive responses 🙏🏾❤️ We’re just grateful to God that he’s okay. No word yet on the Councilman. Again my brother’s instagram is @vlonevicc send some love his way!

Riverfront Times reached out to the City of Florissant this morning seeking comment about the incident. A voicemail left for Jones was not returned by publication, but we will update this post if we hear back.