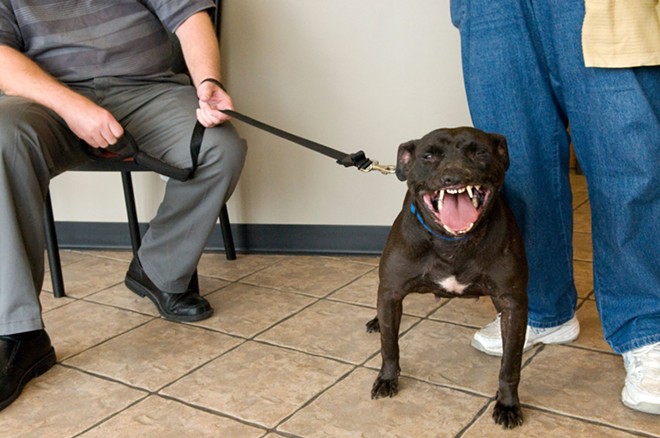 On a dark morning in July 2009 in the northern Missouri town of Hannibal, Mike Bizelli photographed his first dogfight rescue.

He looked inside one plywood box and saw only teeth. Out walked a dog, dragging her chain, her mouth open in a snarl. He turned to Tim Rickey, then head of the Humane Society's animal-cruelty task force, and said, "Watch out, Tim, here's a mean one."

Rickey then knelt down, embraced the dog whose hips were wagging "like crazy."

"She's not mean," Rickey told Bizelli. "She's had her lips cut off."

To Bizelli's surprise, he was right.

"She wasn't mean at all," the photographer says now. "It was pretty cool to get licked by a pit bull fight dog with no lips and all you could feel was her teeth and her tongue running over your cheek."

The lipless dog was Fay, one of 407 dogs rescued ten years ago in Missouri and Illinois during coordinated raids conducted by a multi-agency task force. The investigation had begun in northern Missouri and eventually expanded across eight states. It was biggest dogfighting bust in U.S. history. The number of rescued dogs soon surpassed 500 — 21 of those seized were pregnant and gave birth to nearly 150 puppies. The sting operation would come known as the "Missouri 500."

Rescuers were overwhelmed by the sheer number of animals. They had been expecting only 250 to 300 dogs. When as many as double that number arrived at facilities across the Midwest and South, volunteers scrambled to care for dogs suffering from severe injuries and illnesses.

Originally, only fifteen percent were expected to be in good enough condition to be relocated. Of the dogs taken in by the Missouri Humane Society, more than 50 percent were relocated. Still, not all were so lucky. 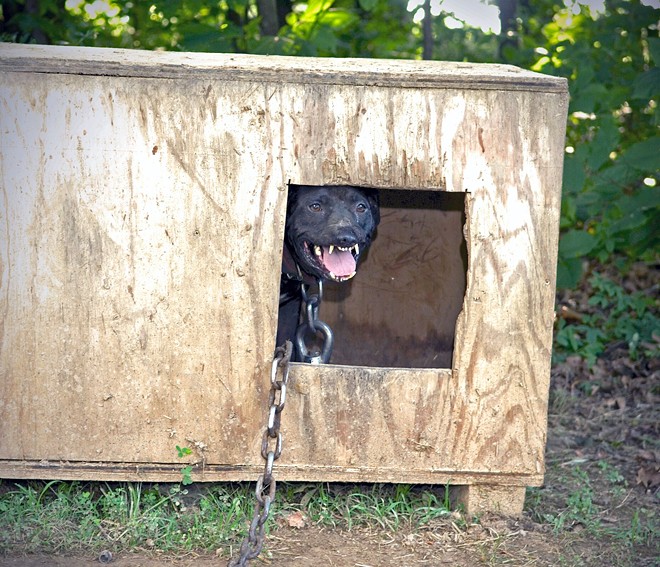 Fay passed away just over five months after her rescue and adoption in a mouth repair surgery. Others were euthanized. But another dog from that rescue, Dharma, found with an amputated leg, trained as a therapy dog for children with missing limbs —one of many such redemptive stories.

A year-and-a-half earlier, the story was different.

In 2008, an FBI-led domestic terrorism task force received a tip that an organized militia group had a sideline guarding dogfights in rural Missouri. After three months of trying unsuccessfully to crack the dogfighting ring, the FBI pulled out of the investigation. But a Missouri state trooper who had worked on the task force decided to push forward on the investigation along with a fellow trooper.

It wasn't easy. Star NFL quarterback Michael Vick had been sentenced to prison the year before for his involvement in dogfighting, and fighters were particularly paranoid about any newcomers.

The agents decided that to be successful, they'd have to put actual dogs in the fights — a decision reached after long discussion with the top officials in highway patrol.

The Missouri Humane Society ultimately joined the effort, with Rickey helping the undercover agents pass as dogfighters. After establishing a relationship with a prominent breeder, they were inside the ring. Beginning in Missouri and southern Illinois, the undercover officers eventually found themselves in Oklahoma and Texas, amassing over 150 contacts and 80 fights.

By July 2009, the investigators had identified a massive network of dogfighters, spanning across the eight states. On the morning of the raids, law enforcement teams swarmed 29 properties from Missouri to Texas.

Along with the dogs, they seized more than 200 firearms and arrested 26 people on more than 100 felony charges.

For Debbie Hill, vice president of operations for the Missouri Humane Society, the raids on that July 2009 morning presented the beginning of her challenge. She was among a tight circle of people who knew in advance about the sting operation in advance. But she was sworn to secrecy, giving her little ability to prepare her staff for the massive influx of animals.

She called a 7 a.m. meeting on the day of the raids with her staff — the first they'd heard anything about the operation. "We went into an open warehouse, and we built cages," Hill says. "We didn't have hoses and drains. We had to modify a lot of this stuff sometimes by the seat of our pants to make it all go."

She and her staff took care of the hundreds of emotionally and physically abused dogs. Within three days, every rescued dog had been medically examined. Formal behavioral evaluations began two weeks later. Hill gave biweekly updates on the animals' conditions and placement recommendations to federal courts. 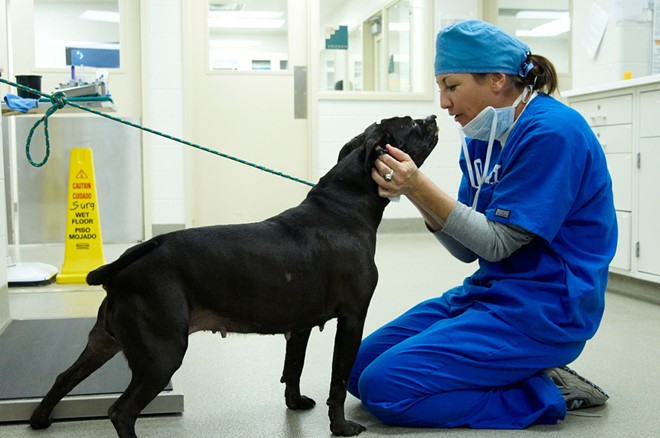 The emergency shelter ran for seven months. Aided by other animal welfare organizations, the Humane Society found permanent homes in eighteen different states for more than half of the dogs. But Hill says they couldn't place every animal from the group, and it was not safe for some to re-enter the community. Those dogs were eventually euthanized.

Hill says the pit bull, contrary to popular belief, is a "human-friendly animal" that is focused on pleasing people. For Bizelli, meeting Fay taught him that lesson immediately. He followed some of the rescued dogs from their abusive environments to new homes. He says that these dogs possess great compassion. He turned the experience into a new book, "Last Day On A Chain: Stories of Compassion, Salvation and Misperceptions," that he hopes will break those misperceptions.

"That is part of the saddest thing—when you take man's best friend and you make him do this for your entertainment," she says. "If given a choice, most of these animals would much rather be in your lap picking ice cream from your fingers than anything else in the world."

In the decade since the Missouri 500, expectations for dogs rescued from fighting has changed. More work and resources are now devoted toward identifying animals that can be rehabilitated and re-homed. Hill says that wasn't the standard ten years ago.

"We worked really hard to have as many good outcomes as we had," she says. "To have any kind of positive outcome had been almost unheard of to that point."

And while Hill would love to say that dogfighting has been eradicated, she knows there is more work to be done. It can be challenging, frustrating, dirty and smelly — she says her clothes are covered in hair — but she thinks it's important. 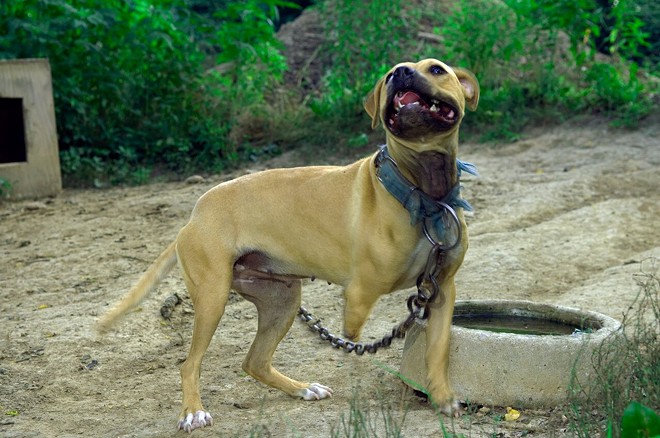