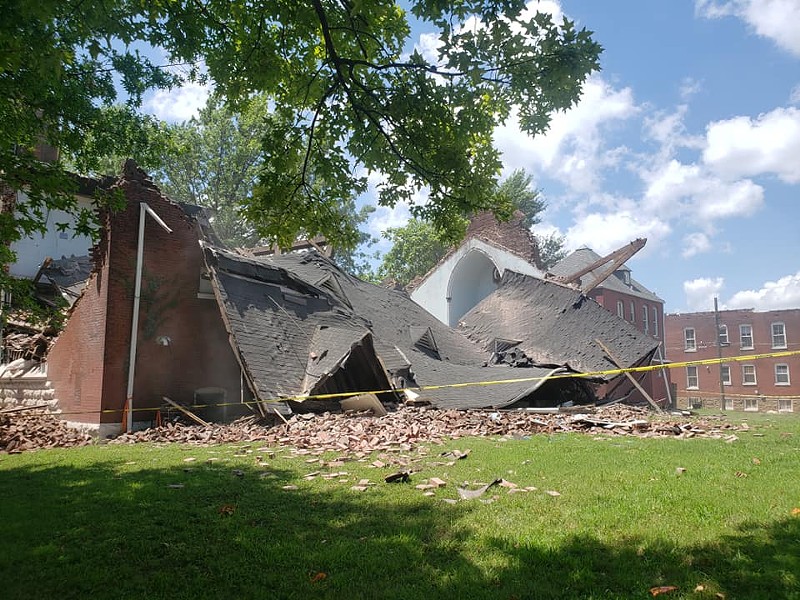 A large brick church in south city abruptly collapsed on Saturday, terrifying bystanders and sending bricks bouncing down across Jefferson Avenue in the neighborhood of Fox Park.

In a video, the walls of the Prophesy MB Church buckle and crash, the result of a series of earlier collapses that left the structure unable to support its own weight. The footage, shot by next-door neighbor Nick Henderson, first shows a large section of the wall collapsing, followed moments later by the roof itself.

(Warning: The video features an audible "fuck!" uttered by someone in the vicinity, which is an understandable reaction at the sight of a church turning itself to dust.)


Reached over Facebook on Sunday, Henderson tells RFT that the church had already suffered a significant collapse in May. The complete destruction of the church, he explained, was precipitated by a smaller collapse earlier in the day.

"A crack had formed after someone had stolen nearly all the windows, further destabilizing an already unstable structure," he wrote, theorizing that the collapse was likely related to "the removal of the windows, and gutting of the interior."

Henderson added that after seeing the church structure buckling, he called the fire department, but they never got the chance to intervene before gravity took care of the rest. Henderson recounts that the collapse damaged two nearby cars and produced a large dust cloud that covered most of Jefferson.

The church's most recent tenants had taken over the building in 2015, but the owner's repairs proved insufficient. In an interview with KMOV (Channel 4), the church's pastor, Johnny Chester, said he'd paid at least $35,000 since 2015 to fix up the church, but he blamed a bad roofing company for leaving work uncompleted.

"We took a hit and I am greatly sorry that this tragedy happened to us," Chester told KMOV.

According to city building permit records, the city recorded $7,875 worth of improvements to the church since 2015, including work to the roof and electrical system.

However, all was not lost from the venerable structure: While watching the demolition crew sort through the church's remains, Henderson writes that he observed workers retrieve a large bell from the wreckage.

"At least they were able to salvage that."