Josh Hawley Goes Off On The *Wink* 'Cosmopolitan Class' 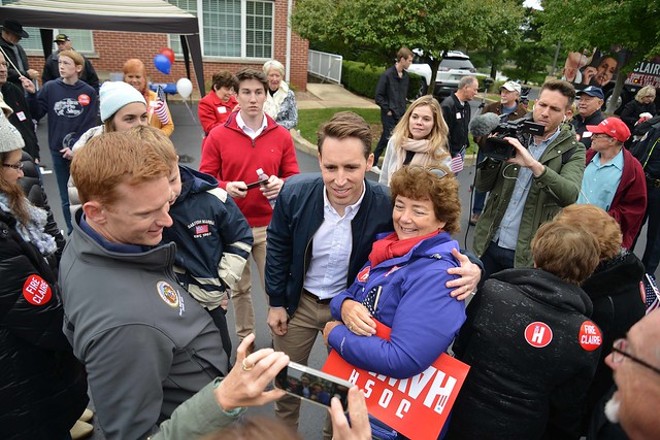 U.S. Senator Josh Hawley (R-Missouri), a man who allegedly hates work and loves leg day, took a break this week from trying to break the internet to stand before the adoring crowd of the National Conservatism Conference and declare that the "cosmopolitan class" is wrecking America and that the Statue of Liberty can go drown itself in the Atlantic Ocean.

Ok, well, no. What he did say was, "It's time we ended this cosmopolitan experiment and recovered the promise of our republic" — a promise that, boy, really sounds like a repudiation of the notion that America is a melting-pot of diversity, a place where one nation can hold many huddled masses, etc.

Throughout the speech — which can be read in full here — Hawley frames his vision of America primarily as a contrast to the "cosmopolitans," including those who seek "economic globalizing [and] social liberationism" and the university elites and businesses leaders who prioritize "social change over tradition, career over community, and achievement and merit and progress."

Granted, the word "cosmopolitan" isn't exactly without baggage — when Trump adviser Stephen Miller ascribed "cosmopolitan bias" to CNN reporter Jim Acosta in 2017, Politico contributor Jeff Greenfield jumped to note that the term had been put to use (often in anti-Semitic ways) by Josef Stalin during the Soviet dictator's purge of dissident artists in the 1940s. What made someone cosmopolitan? For Stalin, it was the artists with "bourgeois Western influences" whose works derided "the positive Soviet hero... as inferior before all things foreign and cosmopolitanism."

Hawley, of course, isn't bashing the Western bourgeois, but his logic isn't far off from the Stalin's propaganda. In his speech, Hawley describes America's cosmopolitan class as those who "dislike the common culture left to us by our forbearers" and plot for the "boundaries between America and the rest of the world [to] fade and eventually vanish."

Interestingly, Hawley never mentions the word "diversity" in the speech. Absent as well are terms often used by nationalists like the Proud Boys, self-professed "western chauvinists" who decry "enforced diversity" and the threat of "cultural genocide" posed by immigrants — instead, Hawley touts his traditionalism as a virtue unto itself, and all while eliding the real-world impact of this nationalism in action.

At one point, Hawley gets right to the core of the issue, blasting the cosmopolitans who hate... neighborhoods and families.

"The cosmopolitan elite look down on the common affections that once bound this nation together," Hawley said. "Things like place and national feeling and religious faith. They regard our inherited traditions as oppressive and our shared institutions—like family and neighborhood and church—as backwards. What they offer instead is a progressive agenda of social liberation in tune with the priorities of their wealthy and well-educated counterparts around the world."

Got that? Good Americans wouldn't dream of changing "inherited traditions" or "shared institutions" — what kind of country would we be if we just started changing things?

Of course, this line of argument has a ready-made group of supporters in the form of white nationalists, and indeed, Hawley previously earned a glowing comparison to Hitler — who once decried the role of a "small rootless international clique" — from a user of Stormfront, a white nationalist website.

I don’t get it. No way this guy doesn’t like cosmopolitans. pic.twitter.com/D2fOTz1isp