Update: Police in Richland, Washington, identified the suspect as 27-year-old Kyle Johnson-Clark. They say he killed a man named Daniel Rice on May 3. He was also wanted in Missouri for a parole violation stemming from a domestic violence conviction. The original story continues below.

A man wanted for murder in Washington state held St. Louis police and U.S. Marshals at bay for five hours in Tower Grove South before he and two others were taken into custody this afternoon.

The 27-year-old suspect is also wanted for questioning in several violent crimes in the city and for violating his parole in Missouri, St. Louis Police Major Eric Larson told reporters. 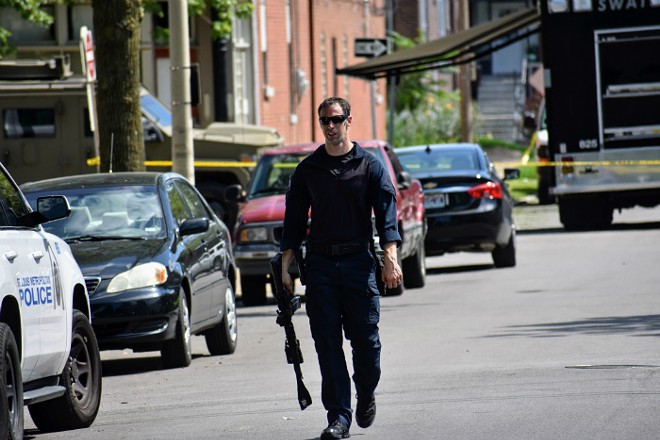 Officers in the city police department's intelligence unit and marshals learned this morning that the man, whose name was not released, was hiding out in the 3900 block of Utah Street and probably armed, Larson says.

Law enforcement agents swarmed the area shortly after 10 a.m. today. The man barricaded himself inside with a man and woman, police say. Officers could hear him firing the gun inside the house. He also fired at an armored police vehicle, authorities say. No one was injured. 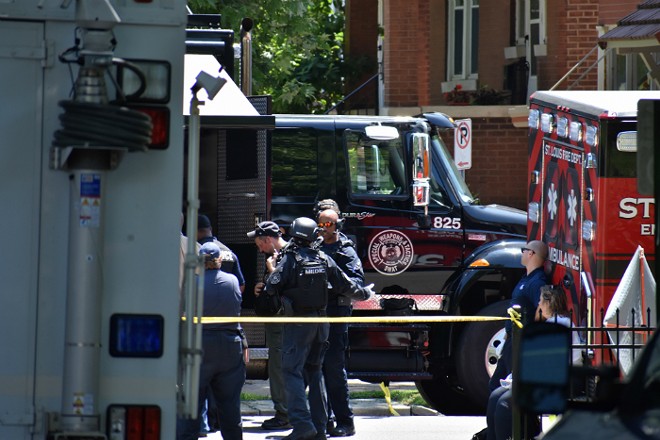 Police crisis negotiators contacted the man shortly after and spoke to him off and on throughout the day, but he refused to come out, police said. As the standoff continued, police blocked off the area two blocks north and south of the scene and one block east and west as SWAT team members gathered around a police trailer used as a mobile command center at the intersection of Roger and Humphrey streets.

A spokeswoman says they evacuated buildings in areas where they believed others would be in danger.

Shortly after 3 p.m., the SWAT team moved in and cleared the house, taking all three people into custody. Officers recovered an assault rifle and a handgun from the house, police say.

Larson says they're still trying to determine the connection between the suspect and the other two adults. He says investigators aren't sure whether the two other played any role in the standoff.

Police have not publicly identified the man or revealed any details about the murder in Washington state or violent crimes in St. Louis.