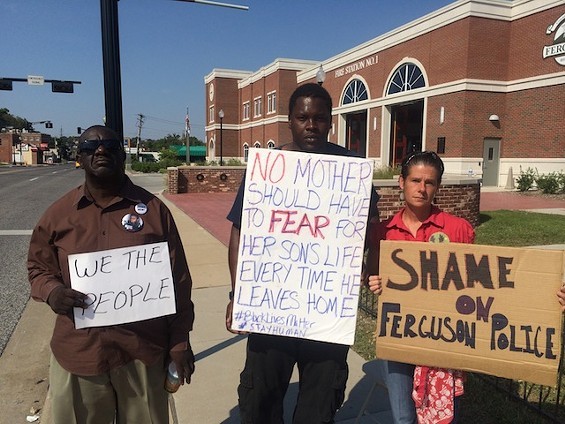 The city of Ferguson has been hit with yet another lawsuit over the conduct of police officer Eddie Boyd.

Boyd — who left his job as a St. Louis Metropolitan Police officer after being investigated for pistol whipping a sixteen-year-old boy, as well as a twelve-year-old girl in a separate incident — has been accused in previous lawsuits of harassing a NGA contractor, arresting a resident who dared to ask his name and terrorizing a father of four after his two-year-old peed outside during a park outing. Even though he was Exhibit A in a CBS News report about how problem cops drift from department to department, he remains employed by the Ferguson Police.

In this latest incident, Boyd is accused of arresting Robert Mentzel in July 2014 after Mentzel tried to record his traffic stop. The lawsuit, filed by Kiara Drake of Khazaeli Wyrsch LLC, accuses of Boyd of unlawful retaliation for Mentzel exercising his First Amendment rights.

Mentzel owns property in Ferguson, and was visiting in order to mow the grass. As the suit details, his sister was driving when Boyd pulled over their pickup truck and demanded identification from not only the driver, but also Mentzel and his employee. When Mentzel "calmly" asked why Boyd wanted their identification, the suit says, Boyd grew "incensed" and demanded it two more times.

At that point, both Mentzel and his employee complied. But, because Mentzel "was concerned about Defendant Boyd’s aggressive demeanor and attempts to intimidate," he tried to turn on a voice recording app on his phone, the suit says.

Mentzel was cuffed and taken to jail, where he was charged with two counts of failing to comply. His sister was also given a traffic citation. “If your brother hadn’t run his mouth, I wouldn’t have given you this ticket," Boyd allegedly told her.

"At the station," the suit adds, "Mr. Mentzel heard Defendant Boyd tell a fellow officer that he had arrested Mr. Mentzel because Mr. Mentzel 'watches too much CNBC about his rights.'"

Despite the flimsiness of the case, it took a full year for Ferguson's prosecutor to dismiss the charges. Mentzel is now suing both Boyd and the city of Ferguson. His attorneys note that in the U.S. Department of Justice's report on policing in Ferguson, it noted "at least three cases in which Defendant Boyd was called as a witness, and the municipal prosecutor withheld impeachment evidence that Defendant Boyd had been found untruthful in an official FPD investigation."

And the consequences of Boyd's arrest of Mentzel continues today, the suit says.

"Five years after his arrest, Mr. Mentzel still fears police. He sweats profusely and his breathing quickens when he sees law enforcement. Mr. Mentzel remembers the helplessness he felt in the wake of Defendant Boyd’s rage. He knows the power police can exert to punish those who have done nothing wrong."

We welcome tips and feedback. But please don't email the author at riverfronttimes.com after today; she is leaving for a job at St. Louis Public Radio.