Circuit Attorney Kim Gardner: It's Time to Move on From Greitens 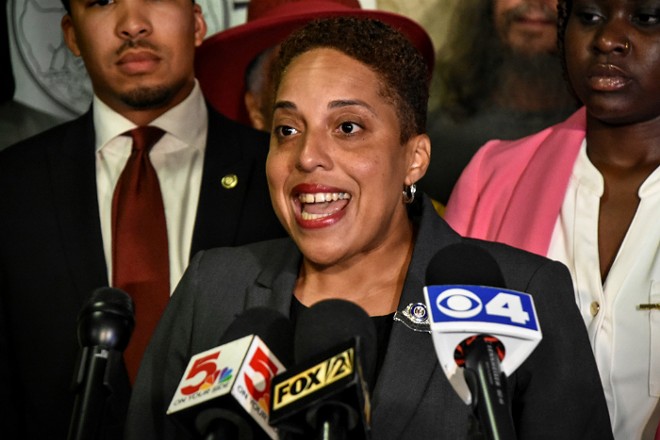 St. Louis Circuit Attorney Kim Gardner says a grand jury's decision not to indict her for her handling of the prosecution of ex-Governor Eric Greitens supports what she's known all along.

"We did nothing wrong," Gardner told reporters today.

A gag order in the case was lifted this week, and Gardner held a news conference surrounded by supporters outside her office in the Carnahan Courthouse.

"Now we have to stop spending our time and limited resources looking at one case as if it is the only measure of competence and success," Gardner says. "The true measure lies in how we handle the 10,000 criminal cases that are referred to our office annually."

Gardner has been under fire since the early days of the Greitens case. She hired an ex-FBI agent named William Tisaby to investigate allegations that the then-governor had blackmailed a woman with whom he had an affair before his election. Gardner's office eventually charged the governor with felony invasion of privacy and, later, computer tampering related to campaign finance violations. That set off a legal war between her and Greitens' high-powered legal team.

Gardner ultimately dropped the charges when a judge ruled she could be called to testify as a witness in the case. Greitens resigned as part of the resolution, but police pushed forward with an investigation into complaints from his attorneys about Gardner and Tisaby.

That has included some dramatic moments in an already strained relationship between Gardner and police department, including the seizure of the circuit attorney's computer servers. Rumors have circulated for months that criminal charges against Gardner were imminent.

The indictment of Tisaby in June on perjury charges only amplified the whisper campaign. The former FBI agent was accused of lying in a deposition, saying he had not taken notes in his interview with Greitens' victim when a video showed he had. The indictment criticized Gardner for not correcting his alleged lies.

However, the same grand jury that indicted Tisaby wrapped up Monday without issuing an indictment of Gardner.

At today's news conference, supporters applauded when Gardner joined them in front of reporters and photographers in the courthouse. Adolphus Pruitt, president of the St. Louis NAACP, says Gardner has worked to bring fairness to a system that has deprived black people of justice since the beginning of slavery in the United States.

"She's been doing that," Pruitt told reporters. "Then these other things unfolded, and we as a people felt we were right back where we were when we got off the ship in Jamestown, again fighting and seeking fairness and equality, especially in the very justice system we've been told is there to protect all of us."

Gardner says she will work to make the city safer and more just. She also took a couple swipes at her critics in the St. Louis Police Officers' Association, whom she says needs to be held accountable, and the media, which has covered every turn of the screw in the Greitens case as well as Gardner's public spat with police.

"We're going to hold people accountable, even when it's not popular with the media," she says.

She declined to answer questions about Tisaby's case or why she didn't testify to the grand jury. Supporters cut off additional questions, praying over Gardner before she returned to her office. 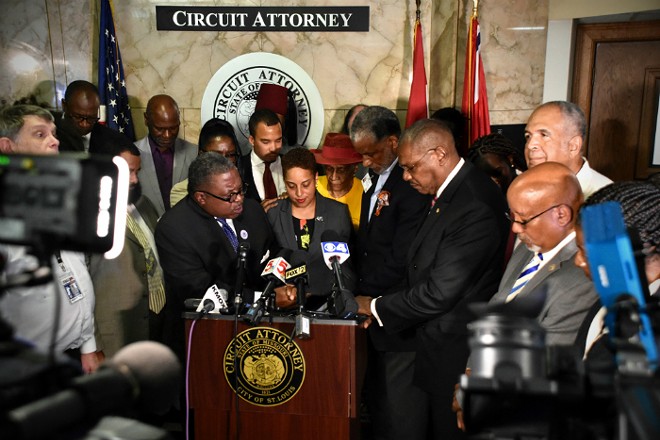