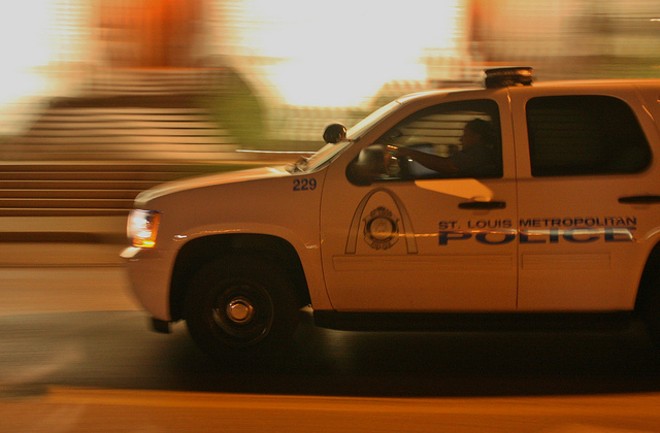 A federal jury took little more than an hour to convict a St. Louis cop who snatched a man from a restaurant parking lot after the man argued with the officer's fiancee — and then took him on a harrowing ride.

Officer Kenneth Grooms was found guilty yesterday afternoon of a misdemeanor charge of depriving the man of his constitutional rights — namely, the right not to be seized for no legal reason.

The veteran officer was on duty on May 5, 2018, at the police department's North Patrol station when his fiancee, Kimberly Woods, called. A man in a pickup truck had narrowly missed her car as he pulled into a parking spot at John's Chop Suey near West Florissant Avenue and Goodfellow Boulevard in the North Pointe neighborhood. Woods shouted at him, telling him she had her daughter and two nieces in the car.

Woods testified the man told her, "I don't give a fuck. Suck my dick, bitch."

It only got worse from there, says Woods, who is now married to Grooms.

Grooms also took the stand yesterday during the two-day trial. He said he could hear the man was yelling at Woods through the phone.

The officer had been in his car at the police station while his partner was inside, typing up a report. He drove off without telling anyone.

Assistant U.S. Attorney Jennifer Winfield, who prosecuted the case with Executive Assistant U.S. Attorney Reginald Harris, focused on those decisions following the phone call. Grooms never radioed for backup or called in to see if there was another patrol car in the area, she pointed out. He didn't even tell Woods to flee the area. Instead, he told her to wait.

Grooms arrived in about five minutes. By then, the man from the pickup truck had gone into the restaurant. In surveillance videos, Grooms is seen walking inside and immediately gesturing for the man to come out. He then walks him to his police SUV, cuffs him and puts him in the back — without a seat belt, Winfield noted.

Grooms' attorney, Luke Baumstark, told jurors the officer was in an "impossible situation." His fiancee was upset, Grooms thought she and the kids were in danger and, as soon as Grooms and the man got outside, he and Woods started shouting at each other again.

"He needed to make sure they were safe," Baumstark said of Grooms. "He also needed to investigate a crime, because a crime had been reported."

So Grooms decided diffuse the situation by separating everyone, he claimed. The officer testified the best way to do that was to cuff the man, put him in the police SUV and circle around the block to an alley behind John's.

The man later told federal investigators that Grooms gave him what's known as a "rough ride," accelerating over a speed bump, slamming on the brakes as the handcuffed man bounced around in the back seat, smacking his head on the roof of the SUV. When they stopped behind the restaurant, the man said, Grooms pulled him out, mashed him up against a dumpster and tipped him partway over a fence, telling him no one cared about him. The man said that he thought he was going to be killed.

Grooms testified that none of that happened. He claimed he never even took him out of the SUV behind John's. They had a cordial conversation, he said.

"I was explaining to him that, as a man, that's not the way to conduct yourself in regards to a female," the officer said.

Grooms eventually drove the man back around front and let him out. Baumstark said there was no rough ride, and his client thought the two men had reached an understanding that would prevent any future problems should his fiancee run into the man again.

Baumstark said Grooms could have arrested the man, or at least, had dispatch run his name for any open warrants. But he let him go. He also discounted the account of the manhandling behind the restaurant.

After the man was released by Grooms, he walked back into the restaurant, the lawyer added.

"He hadn't even lost his appetite over what happened," Baumstark said.

But Winfield said Grooms never ran the man's name, formally arrested him or even called dispatch to say he had taken someone into custody, because he was trying to hide his actions.

"He didn't want anyone to know he was there," she said.

FBI agents later used the GPS on Grooms' SUV to retrace his route and phone records to establish the sequence of events. Later, the officer would say he was just conducting a criminal investigation, following police protocol. The alleged crimes he was supposedly looking into varied over the course of his case but ultimately included disturbing the peace and fourth-degree assault.

But when an FBI agent first questioned Grooms, the officer had a different answer that never mentioned an investigation.