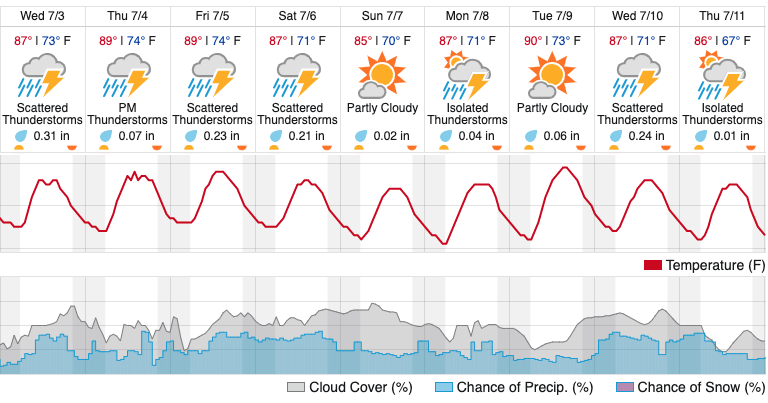 Kiss your plan for a dry Fourth of July weekend goodbye, because it’s officially going to rain in St. Louis until the end of f*cking time.

As if we haven’t had enough dang rain up in this piece lately, the ten-day forecast is looking grim. After checking multiple sources (including our favorite, Wunderground.com), we can confirm that the rain is still coming and that it’s never, ever going to stop.

After all of the insane amounts of rain and tons of flooding lately, it seems like we’d be due for a dry spell, but noooo. Our hopes are drowning in this forecast.

Okay — to be honest — we’re probably still going to do all of these things, we’re just going to have to keep an eye out for scattered thunderstorms and find shelter when the pockets of rain blow through. And maybe it isn’t so terrible to have a little bit of water falling from the sky on the weekend when all of St. Louis lights stuff on fire and blows shit up.

But this crap might not actually rain on our parade! “America’s Birthday Parade” kicks off on Market Street downtown at 9:30 a.m. on the 4th, and right now the weather fortune tellers are saying it will just be “partly cloudy” that morning. Woo-hoo!

They also say that “scattered thunderstorms” are coming later that afternoon, but they will apparently move on before fireworks time. Maybe the rain gods are actually smiling on us after all?