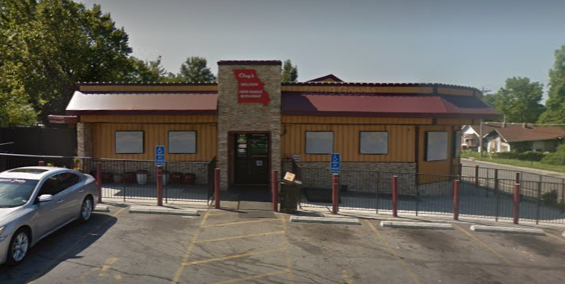 Four people were injured overnight in a drive-by shooting outside of Clay's Wellston Food Market, the same shop where Officer Michael Langsdorf was killed on June 23.

According to the North County Police Cooperative, the shooting took place at about 11:49 p.m. last night. Police say it occurred on the west side of the store, which is located at 6250 Page Avenue.

Police have released photos of a man and a white crew cab pickup truck that they believe may have been involved in the shooting. They ask anyone that has any information about the man or the vehicle to contact the North County Police Cooperative at 314-428-7374. The four victims were all transported to a local hospital and are expected to survive.

The Wellston Food Market is the same location that Officer Michael Langsdorf of the cooperative was shot to death at point blank range last week while responding to a call about a bad check. St. Louis County prosecutors have charged 26-year-old Bonette Meeks with murder in the shooting. A second suspect, Kwayn Smith, was also charged yesterday in connection to that crime.

KMOV reports that more than 1,200 911 calls have been made in the last two years in relation to the Wellston Food Market.

"From your petty crimes, all the way up to your most serious and violent offences. They are happening here," cooperative Assistant Chief Ron Martin tells the station. "And I think it behooves us as a law enforcement organization, it behooves the city officials of Wellston, it behooves the business owner and it behooves the community that we sit down at the table and come up with a plan."