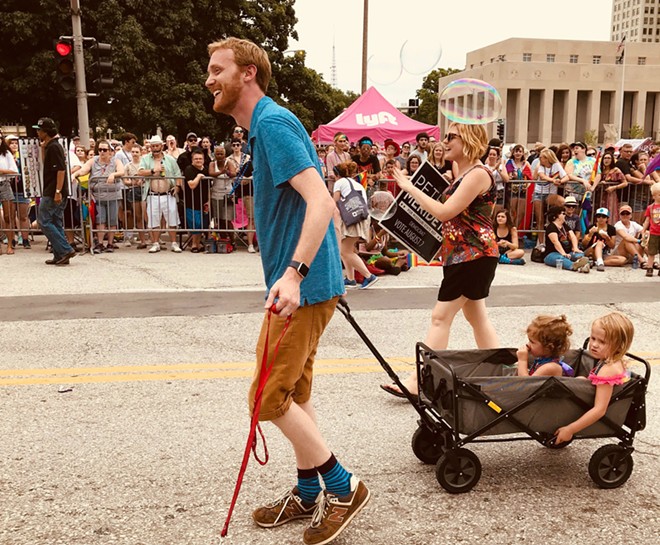 As Pride Month came to an end this weekend with colorful celebrations of love and community, I can't help but notice the contrast to attitudes from the Missouri legislature. It's a good reminder of why celebrating Pride continues to be so important.

2019 was the 21st consecutive year that we Democrats in the legislature have fought for the passage of the Missouri Non-Discrimination Act, or MONA, which would ban discrimination against members of the LGBTQ community. It was the 21st consecutive year that the “conservative” majority rejected the bill without even allowing a vote. In 2019, for the first time, we managed to pass the bill out of the General Laws committee in the House. And this year, Republican leaders allowed a committee hearing in the last weeks of session but refused to allow a vote. They expected Democratic leaders (and LGBTQ activists) to be grateful for this minimal concession.

It’s been 50 years since the Stonewall riots, we’ve had 40 years of Pride marches in St. Louis, and yet in Missouri you can still be legally fired or denied housing because you are gay.

Let me say it again for those in the back:

IN MISSOURI — ENTERING 2020 — YOU CAN STILL BE FIRED OR DENIED AN APARTMENT FOR WHO YOU ARE OR WHO YOU LOVE WITH NO LEGAL RECOURSE.

But the legislature’s refusal to pass MONA is just the most well-known symptom of the larger problem. The majority’s disrespect and hostility toward the LGBTQ community shone loud and clear in their policies and priorities again and again this year. For example:
The silence of our leaders is a betrayal — and it is deafening in response to the bigotry and prejudice in our Capitol. LGBTQ youth are much more likely to attempt suicide than their straight peers, and bullying and hate crimes against them are on the rise. Protestors holding hateful signs is one thing, but when our elected leaders inside the building refuse to even denounce Westboro Baptist Church's presence, they are telling LGBTQ Missourians they are not protected in our state. When that silence is paired with Republican policies that validate discrimination against these kids under the guise of “religious freedom," or deny basic rights to the LGBTQ community, or insist on calling their marriages illegal, or reward members that spew bigotry, the message they send to these kids is that they don’t have value.

We don’t need more silence. We need more pride. Pride in ourselves and all of our neighbors for who we are. Celebration and acceptance of ourselves and others, and of love in all its forms. Our kids need to hear this message, and Missouri leaders owe it to them to join in the celebration. Now, as much as ever, the need for Pride continues in Missouri.